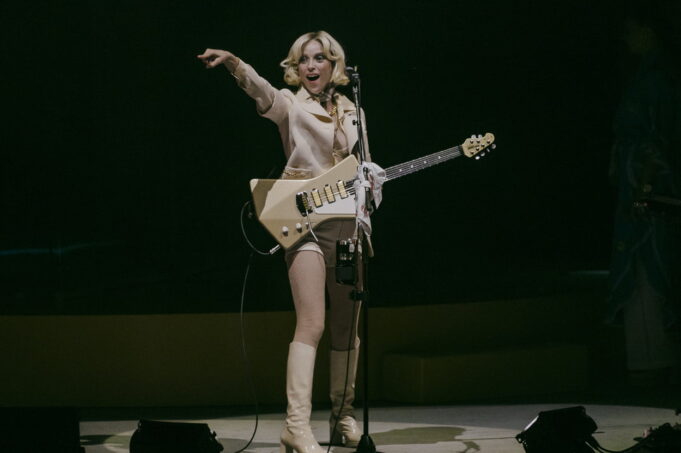 St. Vincent brought her Daddy’s Home tour to the historic Greek Theater in Berkeley on September 23rd, 2021. The tour, named after her most recent album released in May, began on September 3rd and ended in late October.

To kick off the night at the beautiful outside venue, Annie Erin Clark, aka St. Vincent,  performed “Digital Witness” from her self-titled fourth studio album released in 2014. St. Vincent also effortlessly played the guitar during her set, proving her musical talent. She also had three incredible backup singers helping her through the night, adding an element to her songs.

During the show to a packed crowd, Annie about how fucking awesome the crowd was and how happy she was to be back performing in front of an audience again after the crazy past year. The scenery on stage was also captivating, with a cityscape backdrop on a rotating platform with a mirror opposite.  The staging led to some exciting moments with Annie singing to the crowd while looking at herself in the mirror.

Throughout the 16 song set, St. Vincent performed songs from most of her albums like MASSEDUCATION, Strange Mercy, Actor, and even her debut album Marry Me, released in 2007. After her set, she came back out for an encore where she performed four more songs “Year of the Tiger,” “Your Lips Are Red,” “Live in the Dream,” and “The Melting of the Sun.”

Actor Out of Work

…At the Holiday Party

Pay Your Way in Pain

My Baby Wants a Baby

Your Lips Are Red

Encore:
Live in the Dream

The Melting of the Sun