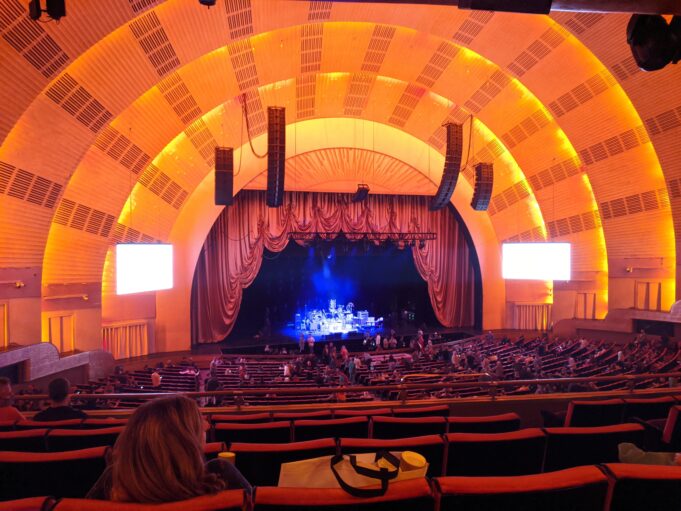 There are venues that are staples of the live music scene, and as the ultimate consumer, connoisseur, customer? we collect shows at these venues like others collect baseball cards. The Gorge- check, Lollapalooza during the 90s. Red Rocks- check, Phish 1995. Madison Square Garden- check, check, check… And other venues, you just wait for your chance to get there, as was the case for me with Radio City Music Hall. I grew up in CT, so the venue is historic, just as it is internationally. But I didn’t grow up dying to see the Rockettes Christmas show and so I have not had the occasion to get there until recently.

My buddy called up and said he had tickets, and since it was near to his birthday and my wife’s birthday too we made a weekend out of it, traveling down to his Long Island home, and we trained into the city. There has been all sorts of doubt leading up to this show with the horn section bowing out due to Covid a week or two ago, and just days before the drummer, Russ Lawton, also bowing out due to a positive test result. Who even knew what this band would be or what they might do? My Phish friend from out in Oregon joked “It’ll be a mannequin with a tape deck taped to it by the end of the weekend!” I had watched the developments in the days leading up to this show with TAB appearances in Pittsburgh and Washington DC giving up clues as to how this would all play.

Trey Anastasio took the stage around eight PM with a full electric band- Ray Packozski on keys, Cyro Baptsita on percussion, and Dezron Douglas on the bass who is still in his TAB membership infancy having taken over for the departed Tony Markellis who sadly passed earlier this year. But Dezron is not the only new member here, with Jon Fishman being called into emergency service in Lawton’s absence. Being less familiar maybe with the Trey Anastasio solo works, Trey’s bandmate in Phish implied and resulted in many a Phish song performed that night.

I hesitate to even consider this a Trey Anastasio Band show, as that band is a show band laden with horns and vocalists, supplying a wholly different sound than a typical Phish show. This felt more like that run that the Dirty Dozen did in the last 1990s without the brass band- a high quality rock outfit familiar with themselves, their audience, and expectation performing unexpectedly without horns. The quintet spent no time acting like a large band minus members, but rather immediately established themselves as a unit.

The band came out with two Phish songs right off the bat and were not hesitant, laying down thick funky grooves as they unfurled 46 Days and Tube. Both were strong performances by Dezron Douglas who is establishing a pocket and bubble that is uncommon in the jamband scene. Fishman locked in with Douglas with Baptista providing a role that was more about providing color and texture than the lockstep grooves that Fishman and Douglas were creating. The first TAB song of the night In Rounds was paired with Phish song Gotta Jibboo. Jibboo had all of the bounce and playfulness that you want out of that song, and went into the classic TAB sonog Cayman Review. Phish’s Blaze On closed out a first set that clocked in around seventy minutes.

After a pretty short set break I would put at about twenty minutes or a bit more, the band returned with a Phish laden second set. This was more of an a sojourn, with Trey stretching and exploring these songs and allowing his band to really stretch their musical legs. The only song in set two that was not a lengthy exploration was the Phish ballad Shade which was more emotional and contemplative.

I have noticed in my recent (the last five years or so, that is) Phishing expeditions that Trey is not necessarily interested in the traditional rock band paradigm. Sure the band is a traditional set up mostly, but Trey is not overly ascribing to the pyramid shaped rock and roll structure. That traditional pyramid to me is wide base of rhythm section, slightly narrower middle section that is supplying the a more measured and defining instrumentation to support the top of the pyramid being whomever is singing or taking a single instrument solo lead. Watching the band you would be lead to believe that this band (or Phish) is similar to that traditional model. But the resultant sound of the band is more of a spherical three dimensional sound, where band members are all adding to the total aural experience- looping, tone, texture all combining to create a holistic sound. Sure, there are tons of solos but it’s not about a single player shredding nearly as much as the combined sound and it’s ability to be shaped and sculpted.

Fishman did beyond an admirable job, and was a bit more reserved than he is in Phish. Douglas is really a great player, a workman at the bottom end. He reminded me a little of Juan Nelson, the original bass player for Ben Harper’s Innocent Criminals. Thoroughly professional and bringing pocket to a jammier sound. Baptista seems to be a bit more of a wild man at the percussion set, and at one point I think it may have been during Mr Completely, he got a solo section filled with vocalizations, animal sounds, and more.

A word about Radio City Music Hall itself, it is rightly earned its reputation. The non hall parts of the venue are great, huge bathrooms with elegant lounges, amazing art deco design, huge vistas, and just a vibe that you could have been seeing this show one hundred years ago, or that someone from the last century who time traveled could walk into the room now and feel at home. The concert hall provided incredible sight lines from our seats (first mezzanine) and some of the most pristine sound I have heard in a facility of that size in some time. You can see why it is the standard bearer of high quality live performances. Trey band was easily able to conjure up their three dimensional sound sculptures in this welcoming venue that is both nostalgic and state of the art. It’s easy to see why any artist would be thrilled to perform there, and any customer ought to consider it a must see venue on any tour.

The encore featured three songs with Trey performing solo with an acoustic guitar. Despite a total shift in instrumentation the sound was perfect and you could hear every nuance, nook and cranny. In particular for me the Theme from the Bottom was sweet! I saw nearly every show on 1995 Phish summer tour so that song rings with my memories of that great time. These three songs also fed my personal need for some song focus as much as, or perhaps more than, the sound sculptures that were the rest of the show. Lyrics, melodies, song segments, sing alongs- this is a big part of what I love about live music. The rest of the show’s interpretations, improvisations, and interpolations are also a big part of what I love about music, and a balance was then struck between those two loves.

The rest of the band returned for a raucous First Tube to close out the night. Then it was up to us to stroll through Manhattan to Penn Station, on the LIRR, and eventually back to the suburbs where we could snack and reminisce about a great night at Radio City Music Hall.