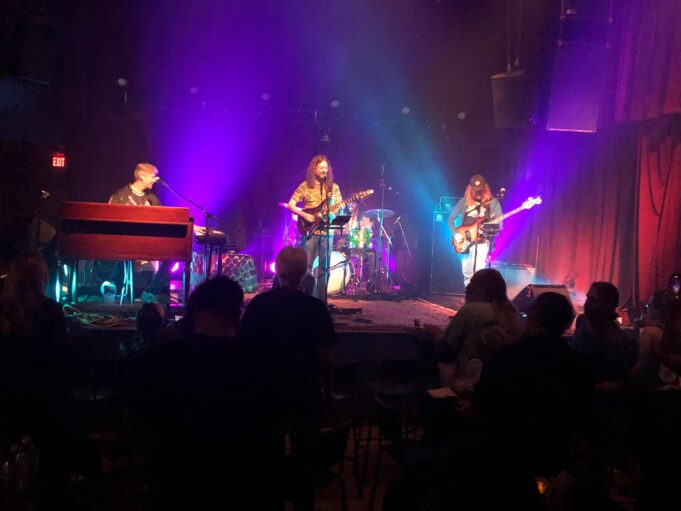 Here is a review of my first live show as the pandemic slowed down. I noticed online that tickets were going on sale for John Kadlecik & Pals for June 6th at the Ardmore Music Hall outside of Philadelphia, PA.

I clicked on to purchase and noticed that the price of the tickets was rather expensive. It was set up for an intimate evening with a limited crowd of 100 people and everyone would have a private table and restrictions were in place for everyone’s safety.

The web page gave a diagram to select your table, which I noticed there was a front row one available. It was $80 per person, which normally at Ardmore Music Hall in PA for this type of show would have been $30 each. I figured on all the money I saved over the year it was going to be worth it so I got them.

From the moment I got the tickets for this show I was extremely excited but didn’t know what to expect. This would be our (my fiancée Janis and I) first show live since Melvin Seals and John Kadlecik in March of 2019.

It was set for a Friday night so I didn’t have to worry about work on the next day. I am a taper so I had to dust off cobwebs, charge batteries, and format SD cards and reacquaintmyself with my recording equipment to be ready for show. I didn’t even know if I’d be able to record but in the past this venue is always friendly to our community and very supportive.

We arrived early, because I’m a taper and its very important to set up and iron out any unforeseen problems ahead of time. We walked up as doors opened and were greeted by staff, who checked my bags and gave us our wristbands. They escorted us to our table and offered us beverages and QR code for bar food.

I began to set up and the floor manager came over and introduced himself. He was interested in my setup and wanted to know about me recording. I was honest with him and said I planned to record audio and some video. He said if I didn’t interfere with anyone’s view, I would be fine.

I got everything almost set up and realized that my clamp didn’t fit the table we were seated at. I had to improvise by borrowing a mic stand I found near the front of stage. So, arriving early paid off.

As the tension mounted the band walked on and began to tune up. At this point I remembered to start recording on all equipment (H6 audio and both video cams) which with the excitement is usually a forgotten task.

They kicked off the show with a nice opener “Bertha” which I felt was like a warm up since this line up (John Kadlecik, Reed Mathis, Todd Stoops, and Chris English) hasn’t played together before. It felt kind of awkward to be seated for a show of this caliber, usually I’d be dancing along with all the others cramming towards the stage. I think a lot of people felt the same.

The 3rd song was “They Love Each Other” and at the table behind us there was some commotion. Our friends were sitting there and a guy came up and was dancing near them. My friend asked him to move and he got very rude and loud. The staff had to come over and escort the guy away. This was very unfortunate because it ruined the night for our friends and this was also their first live show since pandemic. He is a teacher and his wife is a nurse who dealt with many Covid patients.

I ordered them a cocktail and hoped it would ease the tension. As I record, I fully immerse myself in the music and try to capture all the magnificent moments that I can. The first set was filled with those, I even yelled out a song which the band played for me. It was “The Ladder” which I heard Reed sing a while back at Ardmore and have played 1000 times on YouTube.

Another great song from first set was “Seen Love” a song that John K sang so beautifully. They ended the set with “Thats What Love Will make You Do” which was appropriate because John Kadlecik is the reason, I met my Love who lived on east coast and me on west coast. We found each other through a Facebook group and our love grew and I eventually moved cross-country to be with her. We are now engaged and plan to have a nice wedding with hopefully a band like this to play our reception.

The second set began after a nice break where we walked out front to talk and meet all of our friends. I was enjoying a nice IPA called Ithaca flower which is now one of my favorites. The way the boys meshed as the show progressed was absolutely mind-blowing!!

There were so many standout solos. I particularly liked the “Shakedown Street” and “Ring Them Bells”. But you can be the judge if you listen to the audio which I archived and currently editing video from the entire show.

On last note I’d like to mention that another taper gave my girl and I free tickets for the second night. We hadn’t planned on going due to cost, so this was a nice surprise. Miracles do happen.

Hope you enjoy this show and review!