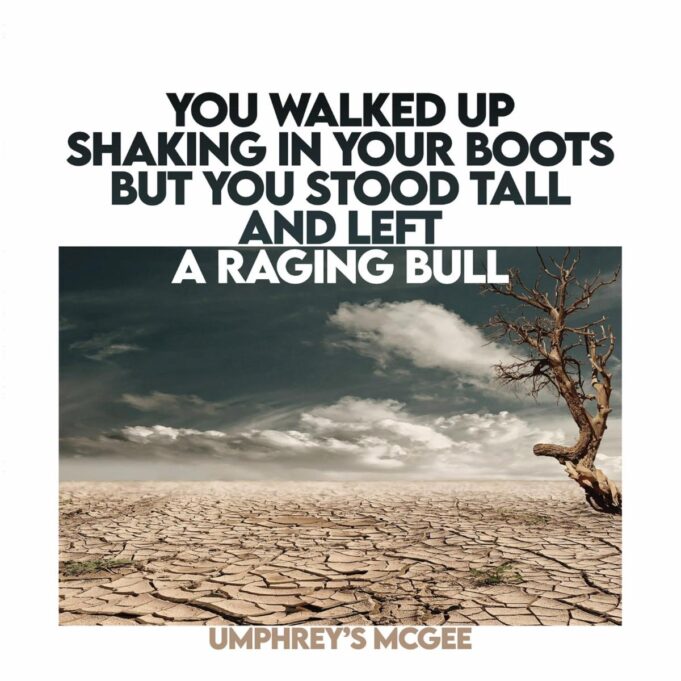 YOU WALKED UP SHAKING IN YOUR BOOTS BUT YOU STOOD TALL AND LEFT A RAGING BULL Out today via Nothing Too Fancy Music; Tour dates announced.

Known for their acrobatic musicianship, airtight songcraft, and stellar live show, the members of Umphrey’s McGee, when left up to their own quarantine devices, elected to take to their home studios and give fans an album they may have never seen coming. Today, the band released a brand new album called YOU WALKED UP SHAKING IN YOUR BOOTS BUT YOU STOOD TALL AND LEFT A RAGING BULL—check out the name’s incredible origin story, animated by Pete Herzog, right here—which is comprised of Umphrey’s McGee’s original, instrumental “walk-on music” compositions.

Since 2009, the Chicago-based improv-rock outfit has been using these intro pieces as a jumping-off point in their live shows, but with the studio development of these compositions, the band landed on something much broader than their original walk-on music concept. There’s an ultra-thematic, driving energy in each song that reaches beyond just pre-show excitement; it’s a balls to the wall, fist-pumping peak with every new track. Fans can stream or purchase the entirety YOU WALKED UP SHAKING IN YOUR BOOTS BUT YOU STOOD TALL AND LEFT A RAGING BULL right now at this link.

Earlier this week, the band hosted a watch party for Pete Herzog’s animated short in which guitarist Jake Cinninger describes how the album title came to be. In short, it involved Cinninger being invited to sit in with the legendary Los Lobos, but should really be heard straight from the storyteller himself at this link. Animation World Network shared the video, calling Umphrey’s the “ultimate ‘jam’ band” and “a touring powerhouse;” celebrating the band’s “innovative mix of progressive guitar wizardry, soft acoustic balladry, and funky grooves.” Read about how Herzog designed this visual masterpiece here.

Stay tuned for more at umphreys.com.

A full list of tour dates and festival appearances can be found at umphreys.com/tour

More About Umphrey’s McGee: YOU WALKED UP SHAKING IN YOUR BOOTS BUT YOU STOOD TALL AND LEFT A RAGING BULL is the latest achievement in the career of Umphrey’s McGee, adding to 2,200+ gigs and 250 million+ tracks streamed. You-had-to-be-there moments include the band’s performance at the first-ever Bonnaroo and selling more CDs (remember those?) than any other act on the bill. A leader in the live music world, Umphrey’s McGee became the first group to launch its own single-artist streaming service with UMLive.net, which houses recordings of every gig since 2005. The service has since grown and now lives on through Nugs.net, which is used by the likes of Pearl Jam, Bruce Springsteen, and more.

Beyond intimate backstage encounters and ski trips with their most diehard fans, Umphrey’s McGee instituted the groundbreaking “Headphones & Snowcones” program, granting fans access to professional headphones and a soundboard-quality mix to listen wirelessly at shows. At their UMBowl, they empowered the audience to vote on the setlist in real-time and choose favorite improv themes via text message. In 2017, they stepped into another realm altogether by integrating themselves into the VR Platform Endless Riff. The wonders, it seems, never cease. From their initial bar gigs in 1998 to repeatedly playing three-night runs to packed crowds at the legendary Red Rocks Amphitheatre, the group has simultaneously remained intensely committed to their fans.

Live Music News & Review was born out of a love of live music and the wish to chronicle the amazing shows happening around the country. Stories and reviews are born both from our editorial board and from readers just like you around the country.
Contact us: lmnan[email protected]