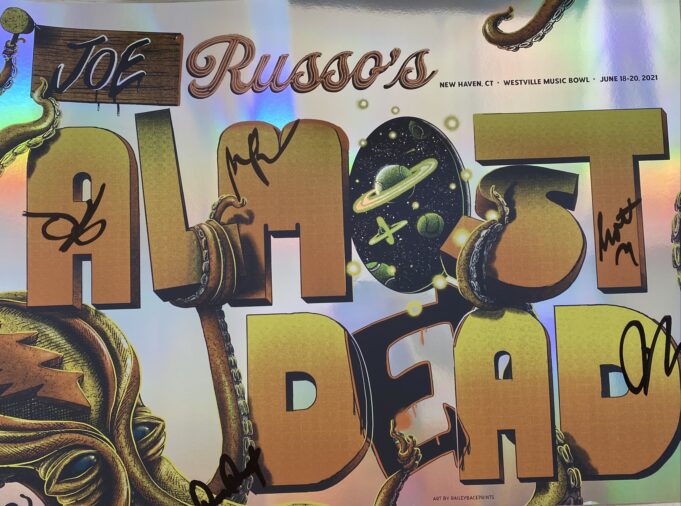 On Friday, June 18, 2021, Joe Russo’s Almost Dead returned to the Westville Music Bowl in New Haven, CT for their second three-night run of 2021. The band’s last run at the former tennis stadium over this past Memorial Day Weekend had proven to be a complete and total washout due to torrential rainstorms. But this time fans remained dry, if not just a touch sweaty from dancing during the killer performance.

As we pulled into the lower lot behind the Bowl, our eyes beheld a busy, bouncing crowd enjoying much of the tailgating, vending, and socializing they had missed out on last month. There was nary a poncho or umbrella to be found in all the lot, and joyous laughter had replaced the sound of rain on car roofs.

Tie-dye after colorful tie-dye filtered up the steps to the main gate near showtime, which was 6:30. We slipped inside just in time to purchase a signed poster from the run, which was created by artist, Bailey Race. Race is also responsible for the poster from the band’s first run at Westville. Both pieces feature the iconic octopus, as well as several artistic nods toward the Westville Music Bowl’s former role as a tennis stadium.

At showtime, lead guitarist, Tom Hamilton who wore a white tank top and burly beard, picked up his colorfully taped guitar and crooned through the band’s first song of Set I, “New Speedway Boogie”.  The jam featured several teases including “Truckin’” and “Spoonful” by Willie Dixon. The band decided upon “Let It Grow,” which was sung flawlessly by Scott Metzger.

Following the band’s opening two songs, Joe Russo who was donned in a black Soul Select t-shirt, swiveled the overhead microphone to his lips and thanked those fans who had stuck out the band’s first run. He doubly thanked the fans who had returned for their second run that evening.

Next, the band wove their way into “Black Muddy River,” a tune they have not played often. The song featured a stunning vocal performance by Tom Hamilton and enchanting keyboard work by Marco Benevento. “All Along the Watchtower” followed, which was last performed by the band in 2014.


The Hendrix classic was absolutely a set one highlight, as it sent the crowd into a dancing rage. The interplay between guitarists Tom Hamilton and Scott Metzger bled into an extremely high-energy “Greatest Story Ever Told”. The set one closer featured Marco Benevento teasing “Dracula” by Medeski Martin & Wood and was followed by a “Dear Prudence” jam featuring a house-beat rhythm from Joe on drums. Additionally, Joe Russo’s Almost Dead had not reprised “Greatest Story” in nearly three years.

Before leaving the stage, Tom Hamilton, Scott Metzger, Marco Benevento, and Dave Dreiwitz were introduced by Joe Russo, who promised to return shortly for another great set of music. We used set break as an opportunity to catch up with friends on couch tour and meander around the stadium, which serves alcohol and often hosts several famous New Haven food trucks.

Around 8 pm, the band returned to the stage refreshed for Set II, which began with Tom Hamilton’s unique rendition of “Atlantic City,” sung and played in the style of Bruce Springsteen. Although Springsteen’s version closely resembles the Band’s instrumentally, the lyrics are sung in different timing and the rhythm guitar part is played without a capo. This combination always works in Hamilton’s favor and showcases his vocals perfectly.

“Atlantic City” featured “China>Rider” and “Mama Tried” teases, which broke off into “Tell Me Mama,” sung by Scott Metzger. The song features a “Chuckles”  tease during the bridge jam. “Chuckles” is a song by Scott Metzger’s band, WOLF! Metzger also led the band through “Big River”.

“Tennessee Jed” came next, featuring a “Hell in a Bucket” tease, as well as a reference to “Becky,” a song performed by the Benevento Russo duo. The stage lights dimmed over the crowd as the band went into a spacy jam, which featured Joe Russo on ‘housekeys’ aka a chime composed of literal house keys. The band lightly jammed on “St. Stephen” before launching into “Cryptical Envelopment,” which was last played in 2019.

The song featured a dissonate “Dark Star” jam and was followed by a true display of JRAD’s setlist craftmanship, which was “Crazy Fingers>The Other One”. One could feel the ground shaking beneath them as the band wrung out the sweat of their brow over their final, explosive jam.

“Stella Blue” became the Set II closer, as the band drew close to their 10 o’clock curfew. The dreamy lyrics and smooth instrumentals mellowed the crowd to near stillness, except for a gentle sway. Friends and loved ones wrapped their arms around one another and looked to Tom Hamilton as he sung the words passionately and shredded his solo.

After Joe reintroduced each member of the band, he called out to Marco and said, “Don’t go anywhere, we’ve got nine minutes.” They performed a rolling encore of “Werewolves of London,” led by Marco Benevento on keys and vocals. Once again, the crowd was sent into a dancing frenzy, clearly ready for another set.  Despite the crowd’s efforts to get one more song, Joe Russo’s Almost Dead left the stage after ‘Werewolves’ and the stadium lights were turned up.

The band’s second run at Westville had started off without a hitch, and it was clear that fans were hungry for more music. Luckily, there were still two more nights to enjoy!