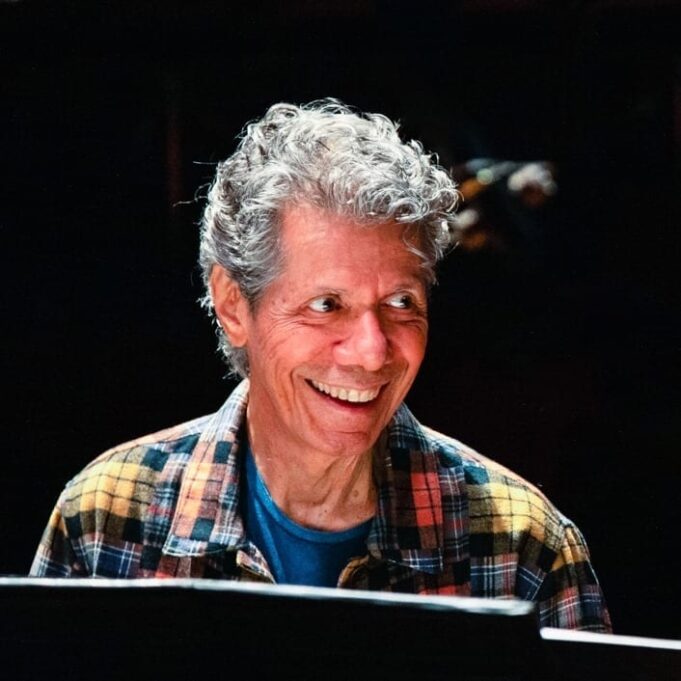 We are sorry to report on the passing of jazz great Chick Corea.

It is with great sadness we announce that on February 9th, Chick Corea passed away at the age of 79, from a rare form of cancer which was only discovered very recently.

Throughout his life and career, Chick relished in the freedom and the fun to be had in creating something new, and in playing the games that artists do.

He was a beloved husband, father and grandfather, and a great mentor and friend to so many. Through his body of work and the decades he spent touring the world, he touched and inspired the lives of millions.

Though he would be the first to say that his music said more than words ever could, he nevertheless had this message for all those he knew and loved, and for all those who loved him: “I want to thank all of those along my journey who have helped keep the music fires burning bright. It is my hope that those who have an inkling to play, write, perform or otherwise, do so. If not for yourself then for the rest of us. It’s not only that the world needs more artists, it’s also just a lot of fun.

“And to my amazing musician friends who have been like family to me as long as I’ve known you: It has been a blessing and an honor learning from and playing with all of you. My mission has always been to bring the joy of creating anywhere I could, and to have done so with all the artists that I admire so dearly—this has been the richness of my life.”

Chick’s family will of course appreciate their privacy during this difficult time of loss.

Corea is one of the most celebrated players in history. His twenty three Grammy wins is an incredible feat: Improvised Jazz Solo, Latin Jazz, Instrumental Composition, Improvised Jazz Solo, Hall of Fame, and the list is quite lengthy. He was nominated sixty times to the highest honor in recorded music.

His work paired him with such greats as Herbie Hancock and Miles Davis and no adjectives can accurately describe his importance to the modern history of jazz. Corea performed all over the globe in his decades long career, from jazz festivals to theaters to intimate venues and lakeside casinos. In every case, his vision and care for the music was clearly communicated to the audience.

Born in 1941 in Massachusetts, the iconic keyboardist, composer and bandleader was a DownBeat Hall of Famer and NEA Jazz Master, as well as one of the most nominated artists in GRAMMY Awards history with 67 nods – and 23 wins, in addition to 4 Latin GRAMMYS. From straight-ahead to avant-garde, bebop to jazz-rock fusion, children’s songs to chamber and symphonic works, Chick touched an astonishing number of musical bases in his career since playing with the genre-shattering bands of Miles Davis in the late ’60s and early ’70s.

While one would expect the 20th century to have been the apex of Corea’s career, he was certainly as productive in the 21st. Whether playing acoustic piano or electric keyboards, leading multiple bands, performing solo or collaborating with a who’s who of musicians, Chick’s career never paused. Underscoring this, he was named Artist of the Year three times between 2014 and 2018 in the DownBeat Readers Poll, a publication that called him “a pianist virtually without peer.”

“A portrait of relentless artistic pursuit and expression, Chick Corea’s passing is a monumental loss to the music world and to Concord,” said Chief Label Executive Tom Whalley. “For 24 years, Concord was Chick’s home and we have been honored all the while by his artistic talents and his presence as a human being.

“Recording in a wide variety of musical styles and instrumental ensembles, Chick demonstrated technical prowess always informed by taste and virtuosity. For five decades, generations of musicians and music fans have been inspired by his both his compositions, performance and recordings.

“Concord is proud of its lengthy relationship with Chick which allowed us to bear witness to a life and career lead brilliantly. Forever thanks for your impactful contribution to the world.”

Remaining a tireless creative spirit who continually reinvented himself through his art, Corea’s remarkable discography with Concord includes Five Peace Band Live with guitarist John McLaughlin, The Musician, The Vigil, Two with banjoist Béla Fleck, Chinese Butterfly with drummer Steve Gadd, Antidote and Trilogy 2. Corea’s latest recording, Plays, a captivating and intimate double album of solo performances, was released on September 11th, 2020. On November 25th, 2020 he earned his 66th and 67th GRAMMY nominations in the Best Jazz Instrumental Album and Improvised Jazz Solo categories for his album Trilogy 2 and the track “All Blues.”