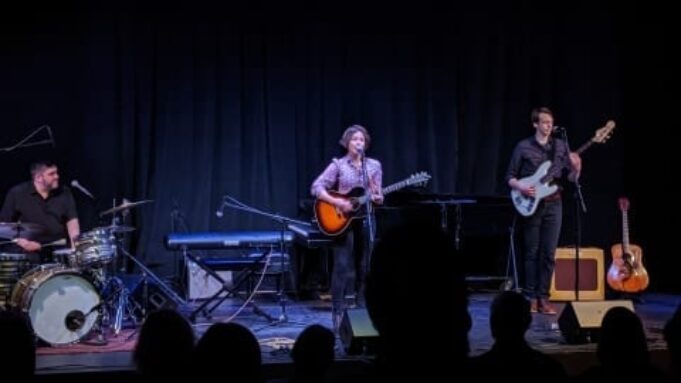 The Next Stage Arts Center hosted the Michigan singer songwriter on March 07 2020 in Putney, VT. Photos by Mary Simon

I had a feeling that I had been to the Next Stage Arts Center before as I entered, but it turns out that I hadn’t been. It is just very similar to a variety of venues spread around New England- converted churches, fraternal order halls and spaces that have been converted into small town arts centers. Up some stairs and we were entering quite a nice auditoriuim, with room for I’m guessing around 300 people, with a nice stage and excellent acoustics.

The show started with Clayton Sabine performing solo acoustic. He was every part the New England singer songwriter, formerly in a band, replete in a button up shirt and singing ironic and wry songs with a cocked eyebrow and a particular world view.

WHOLE SHOW AUDIO, USE THE ARROWS TO TOGGLE BETWEEN SONGS

His music was a good compliment for the headliner. At times it seemed as if he was rusty- as if he had been in a band for years, settled down into a small Vermont town to raise kids, maybe renovate a barn – but continued to write songs. The result was that maybe he wasn’t fully on his game so far as technique, but that he may have been more connected with his songs and message delivery. He seems like an interesting dude to have dinner with and to exchange songs in front of a fire place.

May Erlewine came next with her three piece band- May played mostly guitar but also keyboards and piano, Max Lockwood on bass and vocals plus Michael Shimmin on drums and vocals. Their sound was very textured and quiet, allowing the room to fill out the depth of the sound and for the audience to really absorb the songs and Erlewine’s vocals. Elements of folk, jazz, soft rock and protest songs, new age lyrics with a penchant toward optimism and history combined in an entirely pleasing way.

Erlewine’s songs are a lovely combination of the songwriting of Carole King, Phoebe Snow or Joni Mitchell with the crystal clear vocal clarity and range of Emmylou Harris, Patsy Cline or Dolly Parton. Her range and tone are at the highest level possible and her affable nature and nearly ever present smile are impossible to ignore. She has the uncanny ability to disguise her accomplishments as aspirations- suggesting positivity and spirituality in a way that you can see she has already achieved but is hoping we will join. She was able to convince the audience to join her throughout the night on her material, inspiring sing alongs. The one song that appeared to be a cover (though it’s possible that some more were, it did seem as if 95% of the show was Erlewine’s original music) was Willie Nelson / Patsy Cline’s Crazy. This was an excellent showcase for her style and vocal ability.

Lockwood and Shimmin provided for an excellent rhythmic train for Erlewine to ride. At every turn they were able to lay down incredible vocal harmonies and accompaniment. Shimmin’s approach to drumming was very subtle, and he often used brushes or these giant bundles of wicker or mallets. Lockwood picked up an acoustic guitar for the Willie Nelson song but otherwise shone on his electric base. Both musicians went over and above the call of duty to enhance the songs in the most understated way.

Erlewine has found her voice, her song and is doing her darnedest to bring it to us. We are listening and she is sure to reward us to the highest level for years to come.

WHOLE SHOW AUDIO, USE THE ARROWS TO TOGGLE BETWEEN SONGS