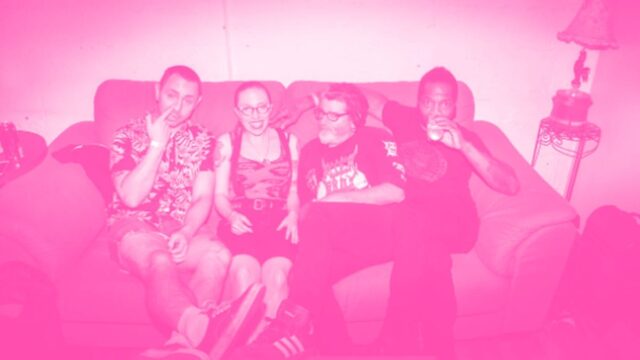 Oakland, CA queercore sensations Middle-Aged Queers have dropped a new single and video titled “Gary’s Making Biscuits.” The song appears on the band’s upcoming debut album ‘Too Fag For Love’ out March 14 via the band’s own label Outpunx Records, in collaboration with Bay Area indie Sell The Heart Records, run by Andy Pohl of Tsunami Bomb.

10″ record pressed on hot pink vinyl. Limited edition of 225 that won’t be repressed in this variation. Includes digital pre-order of the album ‘Too Fag For Love.’ The moment the album is released you’ll get unlimited streaming via the free Bandcamp app, plus a high-quality download.

Crawling out of the primordial ooze of punk past, Middle-Aged Queers are a quartet of Jurassic Punx barreling down Interstate 580 on a mission to save Rock ‘n’ Roll with broken limbs and gear held together with duct tape.

Seasoned veterans of DIY-Punk, Middle-Aged Queers feature ex-members of bands such as Flipper, Fang, Yaphet Kotto, Bread and Circuits, The Cost, Wet-Nap, Saviours, The Shudders, S.P.A.G., The Insaints, and No Alternative.

Scrappy to the core, Middle-Aged Queers recently bootstrapped their debut record, ‘Too Fag For Love’, recorded in under eight hours for less than $500.

Drop us a line at lmnandr@gmail.com with your live music news or live show review.

Live Music News & Review was born out of a love of live music and the wish to chronicle the amazing shows happening around the country. Stories and reviews are born both from our editorial board and from readers just like you around the country.
Contact us: lmnandr@gmail.com
5,401FansLike
200FollowersFollow
302FollowersFollow
6SubscribersSubscribe