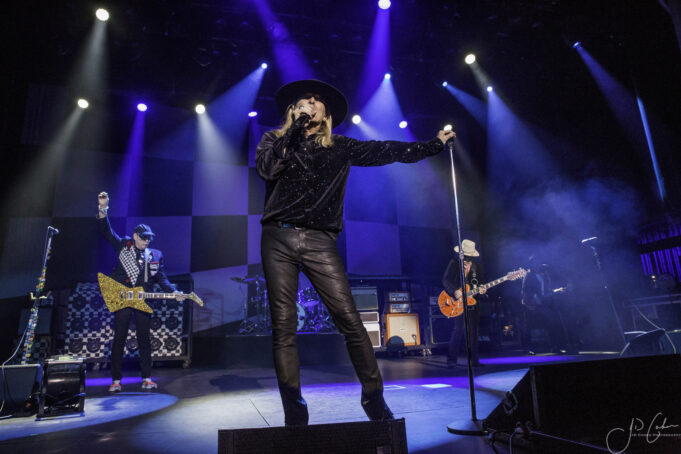 February 4, 2020 was the night that CHEAP TRICK played the Capitol Center for the Arts, Concord, New Hampshire by JD Cohen

It’s hard to comprehend just how big a band Cheap Trick was in the late 70’s and early 80s. In 1979 Cheap Trick’s Live at the Budokan was at the top of the list of most popular albums along with releases from Led Zeppelin, Van Halen, Michael Jackson, Billy Joel and The Eagles.

See the full gallery of photos from this show by JD Cohen here.

Powered by the live version of the song “I Want You to Want Me”, Live at the Budokon became the band’s biggest selling record with over three million copies sold. It would go on to become double platinum certified and ranked number 426 in Rolling Stone magazine’s list of “the 500 Greatest Albums of All Time”. Cheap Trick quickly followed up with the band’s most co mmercially successful record, Dream Police. That record reached number six on The Billboard 200 album chart and was certified platinum in only a couple of short months after it became available. Often referred to as the American Beatles, Cheap Trick has had eight Top 40 singles spread out over three different decades and was ranked 25th by VH-1 on the list of 100 Greatest Artists of Hard Rock. In 2016 they were inducted into the Hall of Fame in 2015.

Originating in Rockford, Illinois, the founding members of Cheap Trick include Bun E. Carlos drums; Rick Nielsen, guitar; Tom Petersson, bass and Robin Zander, vocals. Bun E. Carlos stopped touring with the band in 2010 and Petersson took a hiatus but has since returned. The band added Daxx Nielsen, Rick’s son on drums and recently added Zander’s son Robin Taylor Zander on rhythm guitar. Although they have had their share of ups and downs and a variety of side projects, Cheap Trick has been playing live and touring continuously since their inception.

In 2016 and 2017 they released two exceptional albums, Bang, Zoom, Crazy… Hello and We’re All Alright!. They also released a Christmas album in 2017 called Christmas, Christmas.

This week Cheap Trick made its semi-annual return to New England, appearing on Tuesday night in Concord, New Hampshire. Everyone seemed to be in good spirits as the band took the stage at the historic Capitol Center for the Arts promptly at 7:30. Zander has retained every bit of his rock star cool and Nielsen remains his quirky and eccentric self. The two make a perfect juxtaposition which adds to the band’s charm. Although many see them as a novelty act, largely due to Nielsen’s off beat character and the band’s tongue-in-cheek sense of humor, Cheap Trick is at its core a hard rock band with a gift for melody and memorable guitar hooks. Nielsen is,a skilled guitarist and Zander is a commanding front man and accomplished singer. In very different ways, both know how to engage their audience to maximum effect. Even Petersson who remains off to the side and at the back of the stage for most of the night seems to slyly be having a good time and is responsible for some of the evening’s musical highlights.

In addition to a beautiful bass solo performed at the lip of the stage, Petersson commendably channels Lou Reed on the Velvet Underground’s “I’m Waiting for My Man”, one of the most thrilling and rocking songs of the night.

Cheap Trick has a large repituar and they tend to tweak the setlist from night to night however, there are some constants and most of the big hits remain and are always included. What starts off as a workman like rock concert, somehow builds in intensity to the point where the band and the audience are magically united feeding off each other’s energy. I’m not sure if it’s all the subtle smiles and the aloof attraction of Robin Zander or the massive amount of guitar pick sent flying into the audience by Rick Nielsen but as the band settles into their performance everything seems to magically come together. By the end of the 90 minute set the audience is in a frenzy as Nielsen showers the front rows with guitar picks and Zander looks on with a knowing smile of approval.

The leading members of Cheap Trick are all hovering around their 70s and who knows how long they will continue to to ur. There is certainly no sign that they are slowing down any time soon. The band recently toured with ZZ Top and just announced a new set of dates with Rod Stewart.

“I don’t see myself doing anything but what I’m doing right now,” Zander recently told Rolling Stone. “I’m not going to retire. Why would I ever do that? That’s crazy.”

See the full gallery of photos from this show by JD Cohen here.