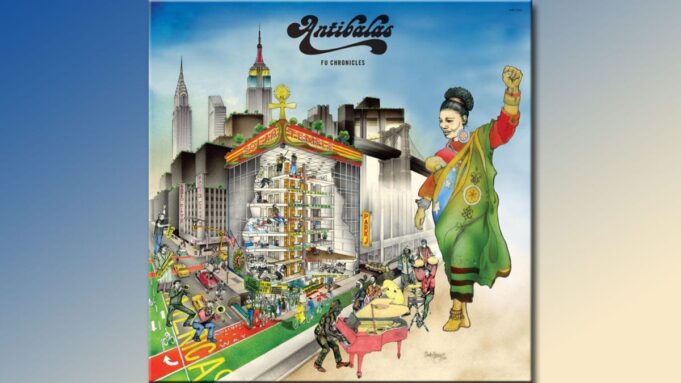 With a globetrotting 20-year career renowned for being a voice for the people across four decades of political and societal upheaval from the late ’90s to today, Antibalas celebrates its 20th Anniversary with a stark return to their Williamsburg roots on its latest Daptone Records studio album released today, Fu Chronicles (Release Date: February 7, 2020). Pre-gentrified Williamsburg serves as the backdrop for Fu Chronicles — voyaging back to the early days of when Antibalas and revered soul label Daptone Records spawned out of lead singer Duke Amayo’s kung fu dojo. A senior master of the Jow Ga Kung Fu School of martial arts, Duke Amayo along with Antibalas founder/baritone saxophonist Martín Perna guide listeners through an epic journey of where kung fu ingeniously intersects with Afrobeat on Fu Chronicles.

To manifest the utopian visions of where kung fu meets Afrobeat, one must enter the world of Duke Amayo who rose from his upbringing in Lagos, Nigeria to become a prominent football kicker at Howard University, and ultimately, a kung fu master and Afrobeat superstar. At age 12, Amayo began his kung fu practice while simultaneously witnessing the spiritual leader Fela Kuti perform at his famous nightclubs the Afro-Spot and Afrika Shrine in Lagos. Living in the same neighborhood of the Afro-Spot and sneaking into the clubs to experience the force of nature that was Fela Kuti, a young Amayo was enlightened on his path destined for greatness in America.

Attracted to the cosmopolitan lifestyle of fashion, dance, martial arts, and music, Amayo moved beyond the highlights of his football career (which led to tryouts with the Washington Redskins and Montreal Concordes) to launch a singular clothing brand and open a kung fu dojo in Williamsburg, dubbed the Afro-Spot Temple. Upon the dojo’s opening, Daptone co-founder Gabe Roth and Martín Perna attended a fashion show at the Afro-Spot Temple, and soon invited Amayo to join Antibalas. The dojo became the headquarters for the band and label with Antibalas’ classic sophomore album, Talkatif (2002), being recorded onsite at the dojo’s recording studio. Coming full circle, Fu Chronicles sees Gabe Roth in the producer’s chair with Antibalas laying down the tracks at Daptone’s House of Soul in Bushwick, Brooklyn.

Fu Chronicles transports listeners to where universal equilibrium and indefinite possibilities unite within a dream world of a child’s limitless mind. The transcendent long-form Afrobeat compositions decolonize our psyches through movements traversing with melodies to realign us with a purpose of finding balance in our coexistence. The fiery Antibalas ensemble — widely renowned as one of America’s fiercest live bands — along with an additional five musicians transform Amayo’s opus into hypnotic and invigorating compositions with singular rhythms of resistance.

Fu Chronicles opens with “Amenawon,” in honor of Amayo’s late mother whose middle name was Amenawon (she is depicted on the cover of Fu Chronicles standing as tall as the Statue Of Liberty carrying a baby). With the literal meaning translating to “may the water you will drink, not pass you by,” the composition speaks to rain water washing away pollution and the unveiling of government lies. Amayo pays homage to the Yoruba River goddess, Yomoja, whose healing powers can be accessed by invoking her name. Water is further a symbol in kung fu reflecting one’s ability to adapt to any situation.

“Lai Lai” (meaning Never, or Forever) is a gate into setting intentions and following through. In tribute to the resistance of the indigenous Africans and their sustainable practices, Amayo is spearheading a green school project in Ikeja (the capitol of Lagos) featuring a rooftop garden with rainwater harvesting and solar panels.

“M.T.T.T. Pt. 1 & 2” (meaning Mother Talker Tic Toc) dives back in time to when Gabe Roth and members of Antibalas studied with Amayo at his dojo in the late ’90s. Initially composed in 1999, “M.T.T.T. Pt. 1 & 2” remains a scorching centerpiece of Antibalas’ live repertoire. Fu Chronicles is the first time it appears on tape. Amayo opens the track referencing the African proverb, “The Truth and the Morning, becomes Daylight with Time.” “M.T.T.T. Pt. 1 & 2” is about cause and effect, and the Karmic nature of time.

A soundtrack for dreamers and activists, “Fight Am Finish” invokes the spirits of Seshat (ancient Egyptian goddess of wisdom, knowledge, and writing) and Ogun (Yoruba Pantheon of industry, technology, and war) as a means to rebuild our world with wisdom. “Fight Am Finish” prepares one for daily battles, offering encouragement to be steadfast in the dreams you have. Upon the start of “Fight Am Finish,” it’s on and get ready to rumble. Don’t ever let go!

“Koto” focuses on resilience and how one can overcome any predicament. Upon being evicted from his space the Afro-Spot Temple due to acute gentrification in Williamsburg, Amayo brings to life the sense of falling into a hole and emerging even stronger. “Koto” further features two lovers, Otok and Regina on the run from the underworld.

“Fist Of Flowers” describes the traditional form of Jow Ga Kung Fu that Amayo teaches as a certified Kung Fu Sifu (master). The movements and shapes express ancient secrets of the Flower of Life and the laws that govern the fundamental dynamics of the energy flow in the universe, the Ying and the Yang. The Flower of Life is the sacred geometry found in all things, including the Kabbalistic Tree of Life.

An illustrator by trade, Amayo depicts Antibalas taking over a NYC building and converting it into a Solar Temple on the album cover of Fu Chronicles. The Avenue of the Americas turns into Indigenous Way with his mother towering over downtown as a symbol of the future reclaiming the indigenous right. A house of solution, Antibalas promotes the technology of tomorrow with Solar Temple teaching the ways of kung fu, indigenous dance, arts & tradition, quantum physics, universal energies, music, and more.

Over the course of its lauded 20-year career, Antibalas has toured across four continents and produced eight studio albums establishing them as the premier Afrobeat band in the West. In addition to their integral role as the backing band for the Tony Award-Winning Broadway musical “Fela,” Antibalas has served as the house band for several star-studded tribute shows at Carnegie Hall and the Apollo Theater paying tribute to the music of Aretha Franklin, David Byrne, Paul Simon, and Billie Holiday, backing dozens including Allen Toussaint, Cee Lo Green, Sharon Jones, Santigold, and Angelique Kidjo. Antibalas members have appeared alongside some of today’s biggest stars, such as Beyonce, Taylor Swift, Bruno Mars, Arcade Fire, Lady Antebellum, and many others.

Drop us a line at [email protected] with you live music news and show reviews.