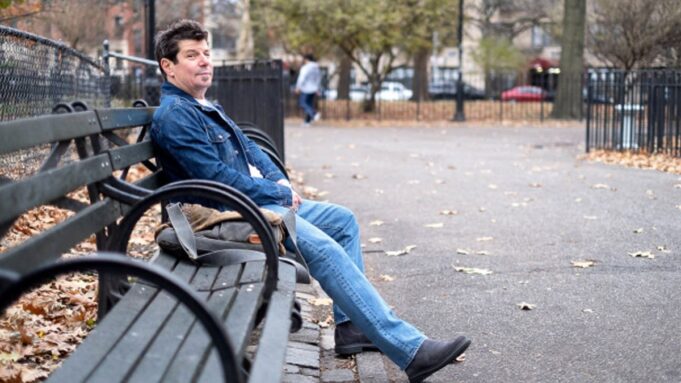 Jono Manson’s Silver Moon, brims with the exuberant musicality of someone whose fire burns bright after many lifetimes in the music industry. Out April 10, the 13-song album is unmistakably Jono, winding through reflective Americana, gritty R&B, raunchy rock n’ roll, and elements of pop.

It’s an invigorating album from an artist who helped define an era, and it features superstar friends such as Warren Haynes, Joan Osborne, Terry Allen, and many more.

“This is an amalgam of the life and music that has defined me. In a way, I feel like I’ve come full circle, but also I feel like I’m just hitting my stride,” notes Jono. “These songs are some of the strongest of my career.”

The title track boasts some of the album’s most poetic lyrics. Here, masterfully accompanied by Jason Crosby’s Hammond B3 and Warren Haynes’ teardrop slide guitar playing, Jono sings: Like the moving clouds/Or the majesty of gravity/She pulls the tides/In ways we cannot see/Like departed souls/Who may show their face/At unlikely times/In a surprising place/So if you’re looking out/Underneath a pale blue sky/Like the morning moon/Sometimes they shine.

Now releasing his 10th studio album, the singer-songwriter, producer, and tastemaker has become something of a roots rock icon. Back in the 1980s and 1990s, he was the godfather of NYC’s famed Nightingale Bar scene, the venue that kickstarted the careers of Blues Traveler, Spin Doctors, and Joan Osborne, among others. Jono will always be associated with New York City, even though he’s lived in Santa Fe, New Mexico since 1992.

Silver Moon is a milestone record for the cult musician, a vibrant mix of the reflective and the raucous that somehow manages to encapsulate the life of times of Jono. “It wasn’t a conscious thing—I didn’t set out to make this statement, everything—including the guests—happened organically,” he shares.

The album’s overarching theme of a silver moon is a byproduct of self-reflection that comes later in life. A silver moon slowly fades away at sunrise but, even as it disappears, it remains present, unseen. The imagery here is rife with mortality.

“I’m 59, and I feel vital and great, but I have these thoughts about what’s next. I think everyone does at a certain age,” Jono says. Reflecting on it all, he says: “I still feel like this kid who just loves to play rock n’ roll. Though I’m still in the trenches, and I’ve never been a rock star, I feel so lucky to continue to have this multi-faceted career.”