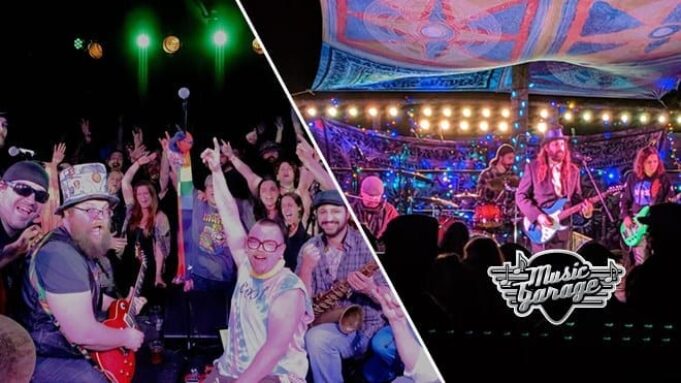 The Garage at the Colonial Theater hosted Rebel Alliance and rice an American Band on January 18 2020 in Pittsfield MA.

It was a snowy night, but a normal New England snowy night so no need to worry, we got this. The Colonial Theater is a gorgeous room in western MA hosting both regionally strong shows from Max Creek to Start Making Sense alongside national shows with a history from Bob Weir to Hot Tuna and more. But when they aren’t hosting these shows, or lengthy runs of off-Broadway plays and A Christmas Carol, the Colonial is still the place to see a show, with smaller shows happening in their front room space, the Garage.

Equipped with a bar, great sound, and a decent-sized stage, the Garage can easily accommodate a crowd of 150 or more folks in a combination of seating and dancing space. On this night, two New England festival favorites, rice an American Band and Rebel Alliance were battling the snow and warming the room with their brands of americana, jam, reggae and rock.

First up rice an American Band is a five piece outfit out of central MA who have become a staple at New England festivals from Strangecreek to Jerry Jam, Harry Brown’s Farm, Wormtown, and more. Phil Simon on vocals and guitar, Lauryn Winiarski on bass and vocals, Steve Benson on vocals, harmonica, mandolin and pedal steel, Brian DiMartino on guitar, and Kyle Heon comprise the unit, who are putting out mostly originals in a style they are calling “True American Rock.” Originals are focused on song more than jam, with lyrics that relate to the lifestyle that these people lead, and music that draws from americana and rock with a penchant for a ripping guitar solo and vocal harmony.

rice fired out a set of ten songs starting with the original “Just a Name” and ending with the Grand Funk Railroad classic “We’re an American Band” with lyrics changed to fit with “rice an American Band.” Along the way, covers by Warren Zevon (“Lawyers Guns and Money”) and Cage the Elephant (“Ain’t No Rest for the Wicked”) were led on vocals by Steve Benson and Lauryn Winiarski respectively. Phil Simon covers the rest of the vocals mostly with a focus on the band’s original material:

Rebel Alliance followed after an incredibly quick stage changeover. The band hails from Western Mass and their entire crew showed up for this one! The onstage ensemble was quite large with Mike Wood on drums, Glenn on bass, Woody fronting the band on guitar and vocals, Whitney on lead guitar, Johnny Bongos on percussion, Aaron on keys, Ryan on sax, and Jess on vocals. Even rice’s Steve Benson jumped up and sat in with the band for the bulk of their set.

The band performed mostly material from their brand new album, Raise Your Soul. Fan favorites both old and new were sprinkled throughout the set which was about ninety minutes. There was even brand new material that has popped out that no fans had heard yet. The crowd was enthusiastic and super supportive of both bands that night with some folks getting up to boogie and others just kicking back and enjoying the tunes.

Rebel Alliance have fostered a great community out in western MA, from North Adams and down to Pittsfield and out toward Wormtown and beyond. You can really feel a great energy built up between everyone, and the interaction stretches from the stage to the audience and back again. The album name, Raise Your Soul, is apt as everyone leans on each other to overcome adversity, celebrate life, and to be conscious of each other. But it’s not overly serious, it’s a realistic portrayal of the youthful spirit and resourceful nature of folks in New England, and the northeastern festival scene.

Drop us a line at [email protected] with your show review or live music news.