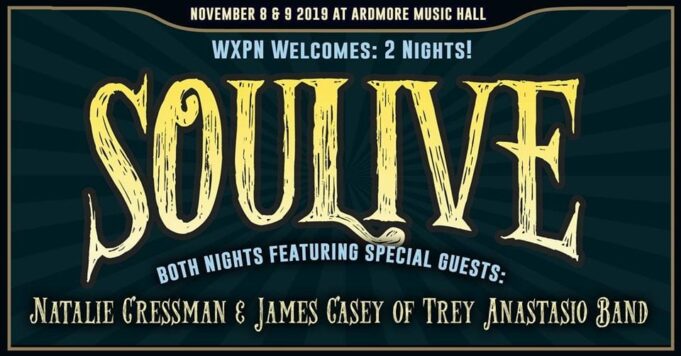 Two decades: The amount of time that Soulive have been bringing their
soul/funk to audiences across the nation. The trio are known for their
dynamic live performances, led by brothers Neal and Alan Evans, organ
and drums respectively, and Eric Krasno on guitar. Starting off the
evening, and the first of two nights of Soulive, was The Ernest Stuart
Trio, featuring Jason Fraticelli (upright bass), Lionel Forrester Jr.
(drums) and of course, Ernest Stuart (trombone). In their hour-long
opening set, the three members were getting the audience engaged, two
of the highlights were “BMJ” along were a stellar jazz rendition of
the Nirvana chart-topper, “Smells Like Teen Spirit”. The trio was a
nice warmup for Soulive.

Krasno and along with The Evans brothers started out with a very
familiar tune to Soulive faithful, “Steppin’”. This let that group
really let loose and explore early on. The trio can take popular tunes
and make it their own in a beautiful soulful way. “Eleanor Rigby” (The
Beatles) flowed nicely into the (Jimi) Hendrix classic, “3rd Stone
From The Sun”. The veteran group was really feeling it at this point,
the energy bouncing from wall to wall, engaging the near capacity
Ardmore Music Hall fans.

Soulive had some special guests for the two night run at 23 East
Lancaster Avenue join them. James Casey (Saxophone) and Natalie
Cressman (Trombone), brought the vibes to an “11” as they brought the
heat to Soulive numbers “Up Right” and “PJ’s” off the groups 10th
anniversary album, “Up Here”. Mixing it in with some old school
renditions of “Tuesday Night Squad” and closing the night off the
classic “Cannonball”. It was great to see Casey and Cressman, take
cues from Krasno, and showcase their virtuosic abilities on their
respective instruments.

With twenty years in the funk and groove world, Soulive, has always
given 110% to their crowds coast to coast. Friday at Ardmore Music
Hall was a testament to this. Hopefully they will be “wowing” crowds
for another twenty years.