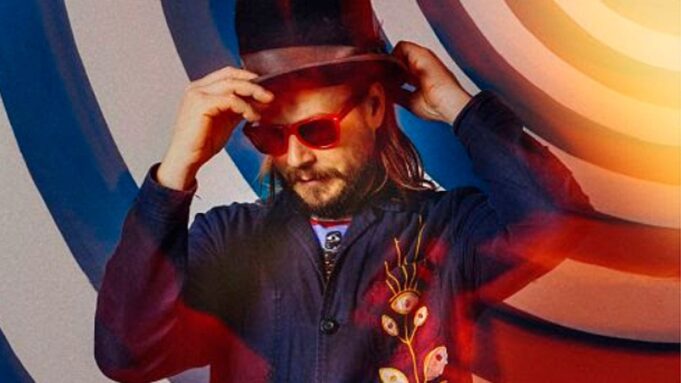 Marco Benevento has released a video for “Nature’s Change,” the 11th track from his latest studio album, ‘Let It Slide.” The clip was filmed by Benevento using VHS cameras, perfectly encapsulating a 1980s’ aesthetic that he’s been known to embrace in his work. It was then handed off to longtime friend Jon Wood (vocalist/guitarist in Talking Heads’ tribute band, Psycho Killers) who added animation to the clip, enhancing the song—which has become a barn-burner in Benevento’s album release tour this Fall—with a “psychedelic warble.”

Benevento and his band featuring bassist Karina Rykman and drummer Dave Butler kick off a ten show West Coast tour next Thursday in San Diego. It marks the third leg of shows, having already covered the Northeast and Midwest this October and November, in support of ‘Let It Slide.’ Following the West Coast tour in December, Benevento and company pick up again in 2020 with Texas and Southeast shows in January and a three night Colorado run in February.

Produced by Leon Michels (The Arcs, Lee Fields), it’s impossible not to hear freedom and excitement coursing through the veins of ‘Let It Slide’ as it introduces a gritty, soulful edge to Benevento’s brand of high-octane keyboard wizardry—an uptempo, uplifting sound he playfully describes as “hot dance piano rock.” For all Benevento’s virtuosity on the keys though, the songs here are driven primarily by intoxicating grooves, with spare drums and minimalist bass lines underpinning infectious, intentionally lo-fi vocal hooks. The resulting vibe is a timeless one, filtering elements of vintage R&B and soul through modern indie rock and pop sensibilities and peppering it with the kind of adventurous improvisation that Benevento’s come to be celebrated for worldwide.

Acceptance is a recurring theme on the record, and Benevento’s songs often find themselves recognizing that contentment can come only once you’ve freed yourself from the chains of desire and regret. Upon close listen, one can find Benevento’s own personal philosophies subconsciously bubbling up throughout the songs. ‘You’ll feel better, I’ll just say / When you finally let it go,” he sings on the psych pop gem “Say It’s All The Same,” which features vocal contributions from bandmate Karina Rykman. The hazy “Solid Gold” celebrates the simple joy of being in the moment with someone you love, while the Lennon-esque “Lorraine” (co-written with Simone Felice) grapples with loss and change, and the anthemic “Send It On A Rocket” contemplates loneliness and connection.