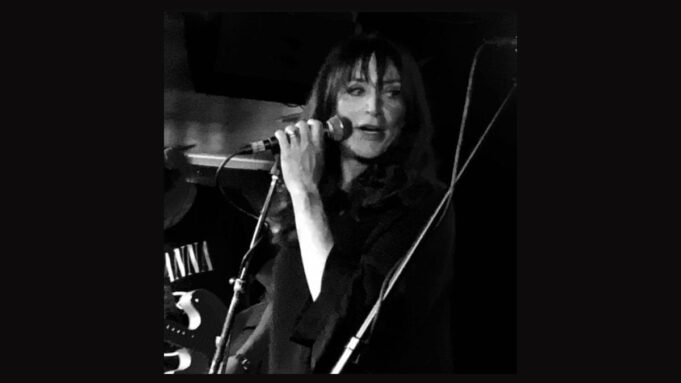 The Mint in Los Angeles hosted Katey Sagal on November 30 2019. By Harriet Kaplan

There was a warmth, depth, and understatement to the way Katey Sagal and The Forest Rangers took to performing famous cover songs from the 60s and 70s at The Mint in Los Angeles, CA, on November 30. This high-profile act essentially made the material their own rather than playing note-by-note recreations of the original numbers.

The songs that worked and came across better and were most memorable  were “Magnolia Wind,” “Cry,” “Temptation Took Control Of Me, “Everybody’s Talkin,” and “What a Wonderful World.” The talented group is  comprised of excellent seasoned and world-class musicians including Davey Faragher (Elvis Costello, Richard Thompson) on bass and vocals, Phil Shenale (Tori Amos, Jane’s Addiction) on keyboards, Billy Harvey (Patty Griffin) on guitar and vocals, Michael Urbana (Cracker, Sheryl Crow) on drums and Bob Theile, Jr. on vocals and guitar (Bonnie Raif and Mavis & Pop Staples). Bob Theile, Jr’s father, Bob Theile Sr., co-wrote the uplifting classic, “What A Wonderful World,” the band performed at The Mint.

The group is also renowned doing much of the music for The Sons Of Anarchy playing on the show’s seven seasons. The lead singer Katey Sagal is an established actress in her own right and is famously known for playing Peg Bundy on Married…With Children among her many acting credits. She is widely known for her role as Gemma Teller Morrow on Sons Of Anarchy, for which she won the Golden Globe Award For Best Actress – Television Series Drama In 2011.

But, Sagal began her show business career as a singer and songwriter first and has worked for both commercially successful and critically-acclaimed artists. Sagal was a backing vocalist for Bob Dylan, Etta James, Tanya Tucker, Olivia Newton and was in Bette Midler’s Harlettes. During the enjoyable and entertaining band’s set, Sagal shared a bit about her aforementioned professional and musical credits between songs. The receptive and enthusiastic audience was composed of a mature crowd of fans and friends in their 30s and up.

Sagal’s performance was self assured, natural, and relaxed. She smiled easily often joking with her band and the audience. She also played guitar and some percussive instruments including maracas, tambourine, and bongos.  Her bluesy burnished voice was lovely to hear and gave the songs the right touch with a less is more approach never over-singing the material or forcing dramatic moments instead just letting the music flow at its own course.

Next up for Katey Sagal and The Forest Rangers is a new album featuring recordings of all the songs performed at The Mint with a few additional numbers included.

Never Ending Song of Love
When I Paint My Masterpiece
Crystal Blue Persuasion
Where Was You At
You Are My Shining Star
Cry
Magnolia Wind
W.S. Walcott Medicine Show
Train
My Love is Getting Stronger
Only Love Can Break Your Heart
Temptation Took Control Of Me
Everybody’s Talkin
What a Wonderful World

Drop us a line at [email protected] to submit your show review or live music news story idea.