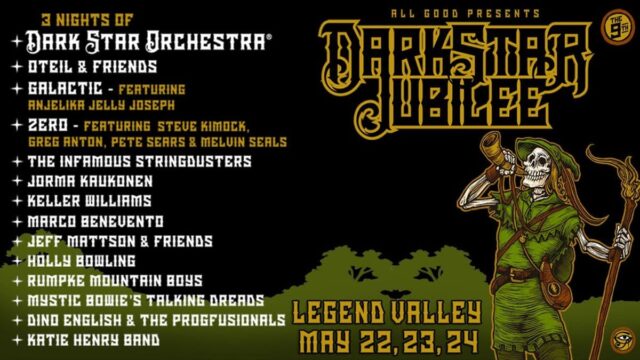 Today, the torch-bearing Grateful Dead tribute act, Dark Star Orchestra, announces the lineup for their ninth annual Dark Star Jubilee music festival. Produced by All Good Presents, the event was created as a band-curated continuation of the ongoing celebration of the music of the Grateful Dead. The Dark Star Jubilee has become a Midwest tradition for kicking off the summer season with three-nights of music, camping and community. Happening May 22 – 24, 2020 at Legend Valley Concert Venue and Campground in Thornville, Ohio, approximately 30 miles east of Columbus, Ohio.

The band is thrilled to present the 2020 Dark Star Jubilee artist lineup featuring:

Dark Star Orchestra finishes off the year with their Cosmic New Year’s Run with two shows at Albany’s Palace Theatre Dec. 28 & 29 (29th will feature a 1977 show), and December 30 & New Year’s Eve at the Wellmont Theater in Montclair, NJ. The band resumes touring on the West Coast in February, after their 8th annual Jam in the Sand festival in Runaway Bay, Jamaica, which is now sold out.

Drop us a line at lmnandr@gmail.com with your festival preview, live show review, or live music news story. We want to hear from you!

Live Music News & Review was born out of a love of live music and the wish to chronicle the amazing shows happening around the country. Stories and reviews are born both from our editorial board and from readers just like you around the country.
Contact us: lmnandr@gmail.com
5,541FansLike
207FollowersFollow
303FollowersFollow
6SubscribersSubscribe