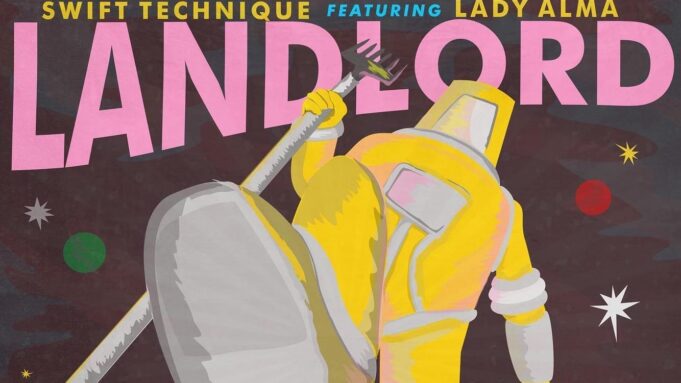 In Swift Technique’s new single release, “Landlord,” the Philly funk and soul collective explores a narrative familiar to many of us – that of being down, out, and dodging grown folk responsibilities. Written from the perspective of someone desperately seeking anonymity and release, “Landlord” features the soulful vocal talents of Philadelphia’s own Lady Alma. Alma lays down the story with a coolness and relatability only she can portray. From “cooking in the dark” to “dancing my troubles away,” Lady Alma sings out a story that is familiar and fun, despite its underlying plea for freedom. To say that the collective was excited to work with this Philly legend is an understatement!

Not only is “Landlord” a collaboration between two Philly stalwarts, but all proceeds made from sales of the single will benefit their hometown’s Broad Street Ministry. Founded in 2005, BSM seeks to be dynamic in its acts of “radical hospitality,” providing a place for marginalized folks to enjoy professionally-prepared food, take free donated clothing, and receive mail- thereby establishing residency. Find out more about them by clicking this link: https://www.broadstreetministry.org/

Swift Technique has been on a bit of a live show hiatus as of late; however, don’t mistake their absence from the stage as them resting on their laurels. Far from it! In fact, the band has been in the studio for over a year creating their first full-length album release, Martian Farm. “Landlord” is the first single of this very exciting collection of music. Coming in early 2020, new and old ST fans alike will enjoy the unique Funk-Rock ensemble’s move in a more sophisticated songwriting direction. Recorded exclusively onto two-inch analog tape, Martian Farm is set to make waves in the national music scene.

Speaking of live shows, if you’re in the eastern PA area, make sure to make your New Year’s Eve plans by catching Swift at the historic Sellersville Theater! Tickets are $45 and can be purchased here. RSVP to the Facebook event HERE.  And joining them is none other than Lady Alma herself!

International singer and songwriter Lady Alma is bringing her soaring, searing vocals back to eager audiences who desire her incomparable funk-house-soul stylings. From her dynamic live shows that left critics and fans alike breathless across the globe for two decades, to the recent revival of her hit single produced by The Rainmakers entitled “Let It Fall,” Lady Alma continues to be a widely praised source of true sonic satisfaction since her introduction. The Swift Technique family could not be more excited to welcome her to the Sellersville Theater stage and have her ring in 2020 with them!

What are you waiting for?! Go listen to “Landlord” and buy your NYE tickets now!