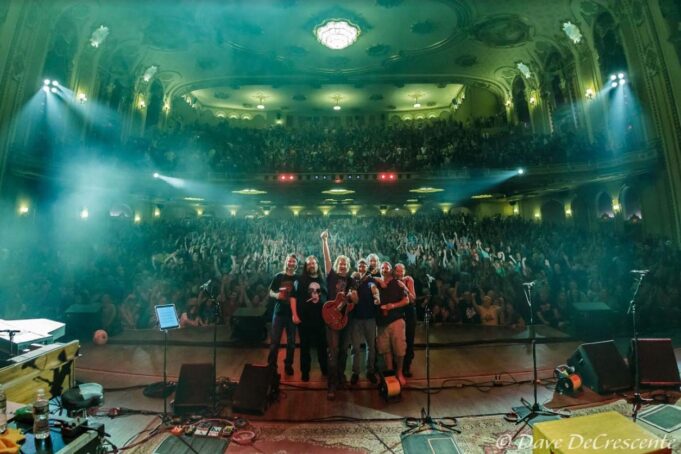 DSO will appear for their annual holiday appearance at Penn’s Peak on November 27 2019 and will continue the celebratory run through until the New Year. by Ryan O’Malley

Since 2005, the words Dark Star Orchestra and Penn’s Peak have become almost synonymous with each other as the band has not only become a yearly staple at the picturesque Jim Thorpe, PA venue, but after their last performance in May of this year, the Grateful Dead tribute act are part of Penn’s Peak’s history.

“Is it really,” drummer Rob Koritz asked after being reminded that this year marks 14 years of doing their annual Thanksgiving Eve show at the venue. “Wow. I think the last time we were there was either our 26th or 27th time, and it’s the most of any artist yet. Those are some of our favorite dates. Especially the Thanksgiving Eve one; it’s one of our favorite gigs of the year.”

Along with gearing up for the Penn’s Peak show on Wednesday, November 27, DSO has also recently added a unique notch to its own history when they got a call from the famed Capitol Theatre in Port Chester, NY. Grateful Dead co-founder Phil Lesh, a long-standing friend of both DSO and the Capitol Theatre, had to reluctantly cancel his annual Halloween run at the venue due to surgery. Wanting to keep the Dead theme going for the holiday, the venue reached out to DSO who happily agreed to play three nights in Lesh’s place, with a focus on paying homage to both the Dead and the Cap.

“It was a lot of fun. It was very last minute – obviously, Phil was supposed to be there,” Koritz said. “He’s doing great, we know that. He’s recovering very well; he’s just not ready to hold a big, heavy bass on his shoulders for four hours a night. So we got the call and went out there and said ‘let’s do some Cap shows.’ We did a 1970 show – I think the very first show they played at The Cap – the first night. Then a 1971 Cap show on the second night. Then for the third night – per Peter Shapiro’s suggestion – we covered a Phil and Friends show; which was the first time we ever did that. All we did was take that set list and played it the way we wanted to. But we based the show that night off of one of Phil’s Cap shows, and I think he really appreciated that.”

The three-night run also gave DSO the chance to dig into the early 70’s Dead catalogue. For the bands first few years, the era was rarely touched by the band. Since current lead guitarist Jeff Mattson – a veteran of seminal New York based Dead tribute the Zen Tricksters – came on board, the band finds itself digging more into the early material as Mattson has always been a fan of the psychedelic blues of the era.

“They really weren’t touched at all until Jeff Mattson came on board…we’re definitely still learning it and getting comfortable with it, but we’ve been doing it for a while now so we’re definitely more comfortable with it than we’ve been in the past,” Koritz said. “It’s getting better every time. It’s a very different style of playing than post-Pigpen stuff. Everything about the band – the instrumentation, the songs, the length of the songs – they were so much younger and their energy is different. It’s a very different animal than later Grateful Dead. I’m finding myself really, really enjoying it when we delve into that stuff.”

The early 70’s material also presents a different approach for Koritz and fellow drummer Dino English. The music from that time period sometimes would include long stretches where there would be minimal to no drums involved which allows Koritz and English the opportunity to play other forms of percussion.

“There’s some funny ones where they’ll have a smoking hot first set where everybody’s jamming, and the second set will start with an acoustic “Dupree’s Diamond Blues,” into “Mountains of the Moon,” into a 25-minute “Dark Star,” Koritz explained. “That’s one of the cool things about that era for me – there’s certain songs where I play a gong; there’s certain songs I play a glockenspiel or a conga drum. Just all different kinds of stuff besides a drum set. So that opens up a whole different style of playing, or non-playing if you will.”

The open-improvisation of the Dead’s music are beneficial for Koritz and the rest of his band mates – Mattson, English, guitarist Rob Eaton, bassist Skip Vangelas, keyboardist Rob Barraco and vocalist Lisa Mackey – as they understand the different musical stylings from each era of the Dead’s music. It’s an appreciation that helps DSO pay homage to whatever era they are recreating instead of trying to recreate a show note-for-note. A bigger example of putting their own spin on the Dead’s music is when the band implores an “elective” set where they just jam on two sets worth of material without any blueprint to follow.

“It would be impossible and counter-intuitive to what improvisation is all about to begin with,” Koritz said about trying to recreate every note from a show.” Ninety percent of what goes on on that stage with Dark Star is improv’d from our own heart– part of my personal drumming style that I really love that I can’t necessarily bring to the stage with Dark Star because it just doesn’t fit. Stylistically, if we’re doing a Grateful Dead show, we still try to improvise within a certain framework. I’m not going to have a lot of splash cymbals or double bass drums or things like that going on. Because you never hear that. When we did that Phil and Friends show and when we do our elective shows where we make up our own set list, we can get away from that, and really kind of play it the way we want to. Frankly, I like doing it both ways. It keeps me refreshed, doing it one way or the other.”

Since the late 90’s DSO has brought both elective and show re-creation sets to Northeast Pennsylvania which has helped the band grow in popularity in the area. Koritz views the area as jamband friendly and remembers when the band first hit the region with shows at former venues including The Woodlands in Plains, PA.

“I remember The Woodlands. That was a hotel if I remember correctly, and a convention center,” he said. “I remember the ceiling being very, very low; like barely above my head. It was an office-style drop ceiling. That’s what I remember about The Woodlands. I also remember being very cold there. I mean, Pennsylvania in general is a great music state; it’s a great jamband state. We do really well in the Philadelphia area, great in Pittsburgh; everywhere. That area though – especially with the Thanksgiving show – you’re close enough that we have a big following in Jersey and a lot of them will make the trip because it’s not that far. I don’t know the recipe and I don’t know the reason, but we are certainly grateful and thankful for it.”

Another venue that marked a first for the band was The Staircase Nightclub, a former venue located in Pittston, PA. DSO played the club numerous times including a memorable show where guitarist Steve Kimock – a favorite of the late Jerry Garcia – first joined the band for nearly a half-dozen songs.

“I remember that place; that was the cinder block room,” Koritz said. “Kimock lives right around there (Bethlehem), so it was easy to have him come and play with us…we’ve been so lucky. Everyone in that area supports us so fully. I’ll be completely honest, there are times at Penn’s Peak or anywhere where we don’t necessarily play as well as we want to. Even though we’re striving for the best, it doesn’t always happen…even when we don’t necessarily put on our greatest show, everybody’s always been really supportive. Even at the Peak – once those lights go down, and we open that door and come out, it’s just such a good feeling because we’re so welcomed.”

That feeling of being so welcomed will be out in full force on Wednesday as the band returns to its favorite log cabin nestled on the top of a mountain for its annual romp to ring in the holidays. Since starting the tradition in 2005, the Thanksgiving Eve show has gained in popularity, so Koritz wants to remind the fans who plan on going to not wait until the last minute.

“That Thanksgiving one – get your tickets now because it will probably sell out fast,” he said. “That’s another really cool thing about Penn’s Peak. It’s one of a few places where – if it’s really cold out it might not be as packed – but whenever we pull in to load in there’s already people in the parking lot. You know, already setting up their little EZ-Ups, getting ready to hang for the day. Most of the places we play we get a scene like that, but they don’t beat us there. It’s pretty cool that they’re hanging out there all day and having a good time; especially if the weather is nice. We’re in the beginning of the Holiday season, so it’s really special for us to get to do it.”

As for the future of Dark Star Orchestra, Koritz notes that that there will be events like their annual Jam In The Sand and the Dark Star Jubilee, but there also might be a slight tweak to their busy touring schedule. Since forming in 1997, DSO has already surpassed the Grateful Dead in the number of shows played. It took the Dead 30 years to perform approximately 2500 shows, and it took DSO under 20. Sure, it shows the dedication of DSO, but after 22 years of being road warriors the band is looking forward to allowing more down time to spend with their families.

“We passed them a while ago,” Koritz said laughing. “I think we passed them in like year fifteen or sixteen. When we do interviews about that, I get the ‘what does that mean to you?’ I always say ‘frankly, it just means I’m never home.’ In the days when we first got started…we were literally doing 170 and 180 shows a year, which is just insane. The last couple of years, we’ve been around the 110 shows a year mark. This year, 2020 and 2021, we’re looking to get it down to around 90 or 100 shows a year. “

Drop us a line at [email protected] to submit your review or live music news.