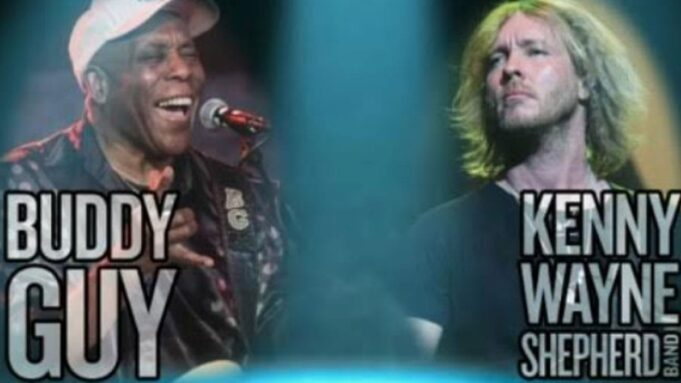 On Tuesday November 19th I had the opportunity of attending Kenny Wayne Sheppard and Buddy Guy at the famous Palace theater in Downtown Albany New York.

To set the tone for the evening, it is a near capacity crowd in the beautiful and ornate Palace Theater as we eagerly awaiting the Louisiana natives Kenny Wayne Sheppard and Buddy Guy to grace the stage. The crowd is already electric and champing at the bit for a night of rhythm & blues.

Taking the stage first was The Kenny Wayne Sheppard Band, kicking off the first leg of a tour in support of their new full-length album, “The Traveler.” The band wasted no time and jumped right in to their melodic and incendiary solos by KWS and vocal mastery by Noah Hunt, a notable blues man in his own right. Throughout the entire performance the audience was captivated by the Louisiana style of R & B that the KWS Band brings to a show. The mind bending and squelching solos of KWS managed to kill not one but two amps in the process. A small price to pay to satisfy the blues Gods. The KWS Band finished their set with an amazing encore performance of Voodoo Chile, leaving the crowd no choice but to provide a standing ovation.

After a short break between sets, the man, the myth, the legend- Buddy Guys, takes the stage sporting his signature black and white polka-dot shirt and smiling big and wide as he greets the crowd. The multi-Grammy Award-winning blues icon is supporting his latest album “The Blues is Alive and Well.” This new masterpiece shows that this Lifetime Achievement winner is far from being done, despite being 83 years old.

Buddy Guys awed the crowd with his originals off the new album, as well as regaling us with hits from the past such as “Hoochie-Coochie Man” and “Cheaper to Keep Her.” Anyone who has been to a Buddy Guy concert knows that he is not only an amazing musician, but he is an amazing storyteller as well. You can feel a part of his experiences through his music as well as his anecdotes as he shares his life experience through several decades in the music industry as a black man.

One story that struck me was the story of his first guitar. Buddy and his family were share-croppers on a farm in the state of Louisiana. The price of a guitar was $1.98 in the Sears and Robuck catalogue, and buddy worked all year sharecropping to save enough to buy it. Just about the same time he had saved enough, “3AM” by Blues royalty B.B. King had been released, sending R & B into the stratosphere.

Fast forward to Buddy opening for B.B. King, in his opinion the greatest guitar player ever. He explained to B.B. King “you fucked me up on the farm” after you came out with 3AM the price of that dam guitar went up to $59.95. The entire audience roared with laughter. Shortly after some grinding on his guitar, covers of Cream and other legends he finished his set with the heartfelt and moving song, “Skin Deep,” There wasn’t a dry eye in the house.