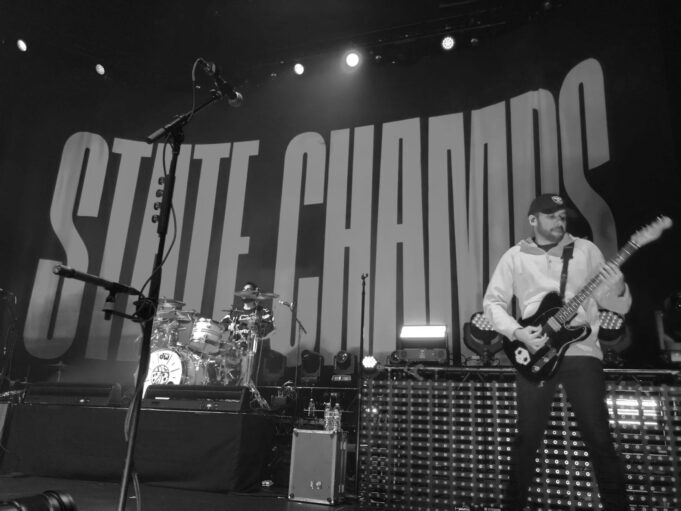 Albany, New York’s State Champs offer up something both new and old in style and sound in pop punk that’s an amalgamation of its influences including The Starting Line, Blink 182, Sum 41, and Green Day.

Formed in 2010, the six-member band includes lead singer Derek Discanio, lead guitarist Tyler Szalkowski, rhythm guitarist Tony Diaz, drummer Evan Ambrosio and bassist Ryan Graham. The talented group has released three albums, the most recent being 2018’s Living Proof, Around The World in 2015, and The Finer Things in 2013. The self-titled EP, The State Champs, came out in 2007, The Acoustic Things in 2014, and Apparently, I’m Nothing in 2011.

Co-headlining with Simple Plan on the Where I Belong Tour 2019, the band, who have an incredibly strong and loyal fan base, wowed the crowd, but they didn’t have to work hard to do it,  but they did like a new, hungry band starting out who took nothing for granted. Their enjoyable performance at the Hollywood Palladium in Los Angeles, CA, November 22 was a frenetic, non-stop energy show that delivered athematic, adrenaline-fueled music was raw and emotive with understandable lyrics about finding independence, break ups, flings, love and loss.

There were plenty of hooks in the songs and infectious choruses. There was stage diving from the most ardent and overzealous fans near the front of the stage. The vibe onstage was a positive and upbeat. Stamp Champs come off like regular dudes that happen to be successful, commercial rock stars but still seem down to earth. Their winning set was fun, entertaining and crowd pleasing.

And the audience showed their own appreciation with frequent sing alongs to accompany the band.