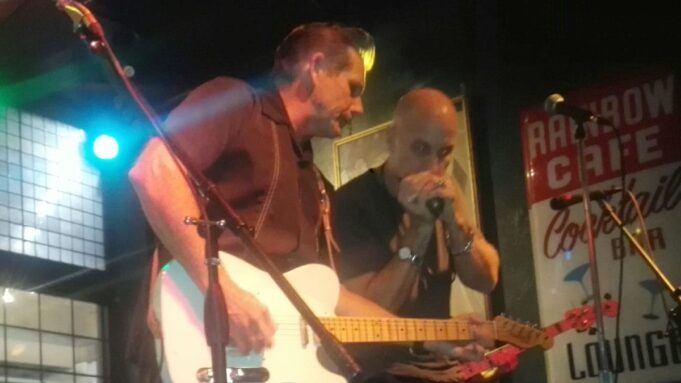 I hadn’t seen Neal & the Vipers in a while; I was due. They’re still a recent discovery for me- for ME I say; they’ve only been around for like thirty years. But their usual stomping grounds (or storming, more like) are in Rhode Island or into Connecticut; to get ’em in at Theodore’s is like a must and a plus together. Besides, Theodore’s. Ain’t nowhere else like it.

The Balkun Brothers came to Worthington Street in Springfield Saturday night. Now, this really had been a while- like, years. Last time I’d had the pleasure was right here at Theodore’s which was pretty exciting- my first shot of their super-high energy was at a festival up in Maine- speaking of a long drive. Another time or two at Infinity in Hartford and where-ever-the-hell-else it was, were all back before they made a big change in their line-up.

Neal and the Vipers need to be heard- they need to be seen, experienced even. Not that they need any help from a humble scribe; the 2019 Rhode Island Music Hall of Fame inductees are getting around just fine as it is. But the world-at-large is missing out on an important entity that we in the Northeast U.S. are lucky to have around, somewhere in New England, every weekend of the year. Any Thursday, Friday, or Saturday, as well as a number of Sundays and Mondays and whatnot, Neal Vitullo and his three amigos are somewhere within reach from Western Mass.

Some destinations will be more of a stretch than an easy reach, but one in particular is a cake-walk of a drive from a mere 15 miles away. Theodore’s in Springfield, as locally legendary as the incendiary guitarist himself, provides a perfect platform for the former “Young Neal” (when he was, lol) and his mates.  The band has one of those schedules that folks call “grueling,” and they have been rolling along for a few decades now- almost as many as the Barbecue restaurant and blues venue has featured live music.

All of which is not to suggest that he and they don’t get around. Texas in particular is a natural stop for them in their travels, but the continental U.S. doesn’t hold them back; they’ve also been known to trip around Europe. And when the band signed to At
Atlantic Records, it was none other than Ahmet Ertegun who plucked ’em from New York City.

You gotta see this guy to get it- words just can’t quite cut it to adequately convey the energy and authenticity shooting from the stage when Neal Vitullo goes into a trance and wields his weapon  like a madman moving in macabre meditation, flinging fire at the gods of electrical current and aiming his axe out over the crowd or looking like he’s gonna lose his grip on the thing if he wrangles with it, whips it around, or hauls it up and over his head, playing articulate lines and pushing out power chords with just a little more frenzy than he already does. Link Wray could have  learnt a thing or two about delivery and dynamics from this guy.

And the rest of the band…? Seasoned pro’s all, and mostly long-timers with Neal. Drummer Mike LaBelle is the new guy, having been in the band for just about long enough to qualify for a driver’s license (lol since 2003).  Singer Dave Howard and the gentlemanly bass player Steve Bigelow have been Vipers for, like, decades now; albeit with a break or two. Suffice it to say that it goes without saying that these are all high-caliber players- they gotta be, to keep this company.