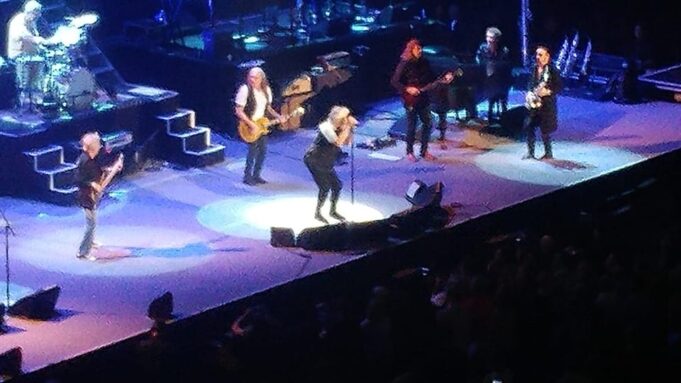 Mr. Michigan brings his Silver Bullet Band to New York City for a final show at the venerated venue on October 30 2019 by Charles DeWeese

It is the Famous Final Scene. Bob Seger declared this tour would be his last. The tour’s last show is in Philadelphia on November 1, 2019. This is the second to last show at Madison Square Garden, the world’s most famous arena. This show was added to the tour schedule just as the tour was coming to a close.

I went to see Bob Seger on May 30,2019 at Jones Beach in New York thinking it would be the last show. It rained at the outdoor show and yet it was one of my favorite concerts. So, when this show was added I determined to see Bob one last time. This band announced this was the last tour called the Roll Me Away Tour.

I was in a good mood at the show and saw my great friend Debra Ann Monsolino, an usher at Madison Square Garden, she always is so kind and does a great job welcoming people to the Garden, I had fun telling some jokes to the concert goers. I said your seat is on Main Street.

Roll me Away was played and Bob said before he played the song, You know I love motorcycles!

The setlist was not exactly the same from the show 5 months earlier at Jones Beach. I like when bands mix up the setlists like the Grateful Dead.

The song “the Famous Final Scene” from the album, Stranger In Town was brought into
the setlist when it was not played at Jones Beach to depict what Bob said would be his last time playing in New York. To see the band ending brought tears to my eyes. I have known Bob’s music my whole life. The band was sounding great; in peak form just as Rush did before they retired.

The only thing with Rush was it was unknown at the time it was the end. Here, we were told, This is the end. Bob Seger was around so long. He even played his hit single from 1968, “Ramblin’ Gamblin’ Man.” He is 74 years old. He changed the lyrics in “Rock and Roll Never Forgets” from , “Sweet sixteen’s turned 31″ to Sweet sixteen’s turned 74!”

The band really could play well and showcased on “Travelin’ Man” segueing into “Beautiful Loser.” The instrumental break was spectacular, words fail to describe how good it was! Those two songs from the Beautiful Loser album and made famous by the multi-platinum
Live Bullet album released in 1976 were my favorite of the whole concert.

Bob played a setlist of well known songs. His albums Live Bullet, Night Moves, Stranger in Town and Against the Wind are all multi platinum sellers with Against the Wind being a number 1 album in 1980, knocking Pink Floyd the Wall from the number 1 position.

It was a deep set of songs. Bob told stories behind the songs. He even mentioned his mother who passed in 1989. He played his Mother’s favorite song of his, “We’ve Got Tonight.” Bob is a great songwriter. Even Bob Dylan has covered Bob Seger playing “Get Out of Denver.” On this tour, Bob Seger called Bob Dylan the Mt. Rushmore of songwriters. He played Dylan’s “Forever Young” as a memorial of all the musicians who have died in recent times.

On the screen were images of Glenn Frey, Bob Seger’s friend since 1966 who was in The Eagles, Tom Petty, BB King, Aretha Franklin, Prince (Prince was cheered a lot). Also, Dr. John and Eddie Money died since the Jones Beach show on May 30th and their photos were added into the show too.

The band featured bass player Chris Campbell who played on the early records from the 70’s as was with Bob since 1969. Alto Reed was on sax, having been with Bob since 1971. He played his famous sax parts, notably Turn the Page was a stand out. This Silver Bullet Band had three back ground vocalists,Shaun Murphy who also sang with Little Feat, Laura Creamer and Barbara Payton. A horn section, The Motor City Horns consisted of Sax Keith Kaminsky, trombone, John Rutherford, high trumpet, Screechy Bob Jensen and Mark Byerly, trumpet, Keyboardist, Jim Moose Brown, drummer, Greg Morrow and Bob played acoustic guitar and piano.

This band had session musicians who were voted best keyboardist and best guitarist respectively by ACM- the Academy of Country Music Awards in 2018. Rob McNelley The guitarist who was playing lead guitarist was amusing to listen to and watch. He was switching between different Gibsons and Fenders. His tone was warm and he nailed the Live Bullet parts when Seger played more hard rock, Rob McNelley, Mark Chatfield also on guitar Craig Frost ,Silver Bullet since 1980, on Keyboards.

From the Songwriter Bob Seger, The Famous Final Scene

editor’s note: Charles had the opportunity to catch up with guitarist Rob McNelly. “That was, By Far, my favorite show of the tour… the energy was undeniable in that room.”