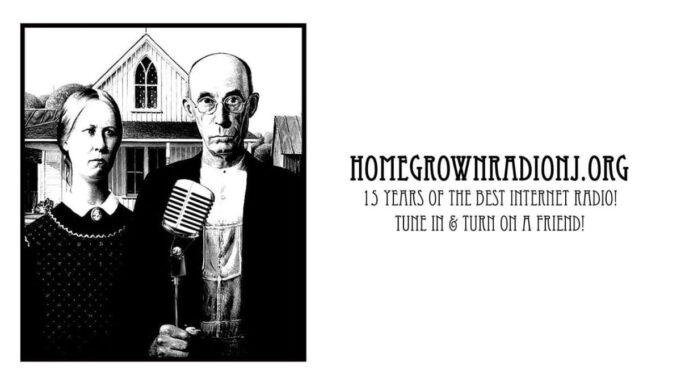 Fifteen years ago today, Oct 30th, 2004, on ‘Mischief Night’ in Blairstown, NJ, Todd Mills and his merry band of Internet Radio Renegades launched HomegrownRadioNJ.org also known as HGRNJ.org. Over the fifteen year time period since, they have broadcasted over 131,400 hours of global webcasting time, 24/7 x 365. A truly eclectic variety of programs, hosted more recently from our cozy storefront studios in downtown Boonton, NJ by dozens of passionate and knowledgeable DJs & Producers.

There have also been many remotely hosted programs, ranging from Madrid, New Mexico to Madrid Spain and lots of other locales the world over! HGRNJ has produced countless live programs and In-Studio & Remote Venue Concert Webcasts over the years. These have involved literally hundreds of local and nationally known musical artists, poets, comedians, political analysts, world travelers and theatre, arts and sciences specialists of all kinds. Eclectic Radio programming is the norm at HGRNJ !!!

On this auspicious 15th annual milestone, we at HGRNJ would like to THANK YOU OUR LOYAL LISTENERS for being along with us for the ride on this long, strange trip! Without your interest, interactivity, financial and artistic support, we would never have made it this far! Well, we’re still kickin’ out the jams, and we want you to come join us to celebrate our 15th anniversary in style, at the Boonton Elks Lodge on Saturday, Nov. 16. There will be amazing live music from the legendary New Jersey country rockers, Kinderhook, as well as Damian Calcagne’s newest musical project, The Pinebox Boyz! There will be arts & crafts, great food, and cash bar available. Admission is only $15.00!

Kinderhook dominated the Country Rock music scene in New Jersey during the 70s and 80s. After a lengthy hiatus, Kinderhook came back strong in 2018 with their first-ever self-titled CD release of their 40 year history, and it’s a great one! They have returned to touring and have been playing NJ’s finer theatres and music venues, including a recent gig opening for Commander Cody, which they had done lots of times back in the heyday, along with Poco, David Bromberg, and many others.

Pinebox Boyz
Take a little bit “Rust Never Sleeps,” a little bit of “Let It Be,” a whole lot of love, add a couple of late night jam sessions up at the Pinebox, and you have the recipe for the Pinebox Boyz. With a Z… Although they look like, and have the name of, a 90’s boy band, this supergroup of sorts is made up of members from notable acts such as Swampadelica, John Ginty Band, Railroad Earth, Neal Casal, Damian Calcagne Band, and Hazy Malaze. Featuring Damian Calcagne on keys and vocals, Mike Buckman on guitar, Paul Kuzik on bass, and Dan Fadel on drums, these Boyz mean business. From the Cream-inspired guitar riffing of “Namaste in Bed,” to the swampy clavinet and drum interplay of “Buh Bye,” and the catchy lyrics and melodies of “What’s Your Dog’s Name,” the Pinebox Boyz cover a lot of ground on their forthcoming self-titled debut album, scheduled for release in the fall of 2019.

The little internet station has made it to our 15th annual milestone, and has no signs of slowing down now! Appropriately enough, on Mischief Night, October 30th, 2004, Todd Mills and a lot of our current staffers launched a then relatively unknown enterprise known as an ‘Internet Radio Station.’ Based in our cozy original home studios of Blairstown, NJ, we have hosted hundreds of live bands and performers over the years, bringing local and national talent to our global village’s eager ears. Come celebrate our 15th Trip Around the Sun with us on Saturday, November 16th at the Boonton Elks Lodge. Featured bands are KINDERHOOK and Damian Calcagne’s new project, The PINEBOX BOYZ!

There will be arts and crafts, memorabilia auctions, food, and a cash bar! Admission is only $15.00. Proceeds go to station/event expenses.

Email us at [email protected] with your story or review submissions.