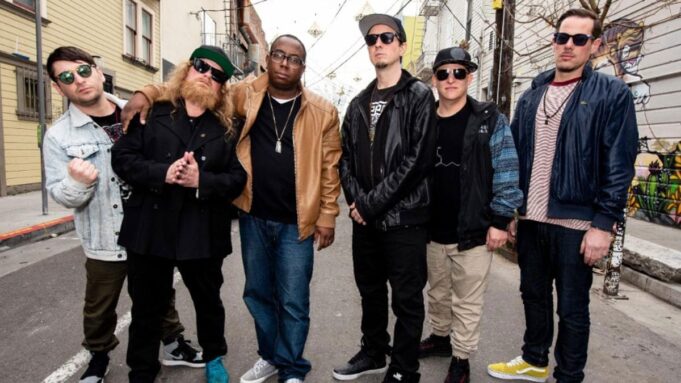 Genre-defying funk-jazz-soul-hip-hop-psychedelic-jam-art-rock-experimental-avant-garde music titans Lettuce kick off the second round of dates on their Elevate Tour, their headlining trek supporting the band’s latest studio album Elevate, starting tonight, November 6th, in Fayetteville, Arkansas. Elevate, released June 14th via their own Lettuce Records, debuted at #1 on the Billboard Contemporary Jazz Album Chart and #1 on the iTunes R&B Albums Chart and has since been streamed over 2 million times.

“We’re beyond excited to get out on the road again so we can make more music,” shares Lettuce. “When we’re out on the road together we have a chance to work out new stuff on the bus, in soundchecks and on stage. We’ll revisit some old stuff and do some writing together. We love the spontaneity of every show and knowing something special will probably happen nightly!”

Following its launch tonight in Fayetteville, the road warriors will bring their blissful rhythms and sonic grooves to such cities as Kansas City, Minneapolis, Chicago, Milwaukee, Columbus, Philadelphia, Raleigh, Charlotte, Washington, DC and Denver throughout the fall. Lettuce will then celebrate a massive 2019 and ring in the new year in San Francisco for a special evening at The Independent on Tuesday, December 31st. From there, the sextet will head back east for shows in Charleston, Houston, Austin, Dallas, Tulsa, Louisville, Detroit, and New Haven, among many others. See below for all upcoming tour dates and visit Lettucefunk.com for ticketing details, including VIP information to Elevate the experience. The VIP upgrade includes meet & greet and photo with the band, invitation to attend soundcheck, early venue entry and crowd-free merchandise shopping, signed setlist, and Elevate Merch Pack (signed poster, sunglasses, bandana and koozie), in addition to hanging out and spinning vinyl with Lettuce at the VIP Pre-Rage.

Produced by Lettuce and recorded at Colorado Sound Studio outside of Denver with legendary engineer Russ Elevado (D’Angelo, The Roots, Erykah Badu), Elevate, the band’s sixth studio album and first new, original music in three years, is a dynamic showcase of their ever-changing and all-inclusive musical palette. The six-member collective – Grammy-nominated drummer and percussionist Adam Deitch, guitarist Adam “Shmeeans” Smirnoff, bassist Erick “Jesus” Coomes, Grammy Award-winning keyboardist and vocalist Nigel Hall, Grammy Award-winning saxophonist Ryan Zoidis and Grammy Award-winning trumpet player Eric “Benny” Bloom – maintains its eclectic, free-wheeling approach while embracing a progressive and futuristic vibe, with elements of Pink Floyd, the Grateful Dead, Eno and Miles Davis, thanks to their love of improvisational music and arts. Elevate features the singles “Krewe,” a western-meets-’60s Ethiopian funk song, and “Everybody Wants To Rule The World,” their jazzy take on the Tears For Fears hit featuring Hall on vocals. Elsewhere on the 11-track album, Lettuce explores its funk roots in the Tower of Power-like punch of “Ready to Live” (a cover of a song by Cold Blood’s Lydia Pense), the Prince-like swagger of “Royal Highness” and the OG blues-soul of “Love Is Too Strong,” which sees a vocal cameo from Marcus King.

A powerhouse collective made up of world-class master musicians, Lettuce is known for their incendiary live shows, extensive touring, die-hard fans, and massive two-decade-plus career. They are also some of the most highly sought-after musicians in the industry with roots that run deep into the worlds of hip-hop, pop, and beyond, working and performing alongside the likes of Kanye West, Lady Gaga, Stevie Wonder, Ahmir “Questlove” Thompson, Justin Timberlake, The Fugees, Eminem, Dr. Dre, 50 Cent,  Britney Spears, DJ Quik, Gary Clark Jr., Skrillex, The Game, Talib Kweli, Anthony Hamilton, Solange, Chaka Khan, Redman & Method Man, Robin Thicke, Preservation Hall, Dave Matthews Band, Gov’t Mule, Bob Weir, John Mayer, Aaron Neville, and more. It’s been more than 25 years since the formation of Lettuce, a democratic ensemble in which there is no leader, but a complete unit that functions as a single entity with plenty of moving parts. The magic continues to grow with the band’s latest album, Elevate.

Drop us a line at [email protected] to submit your live music news or review!