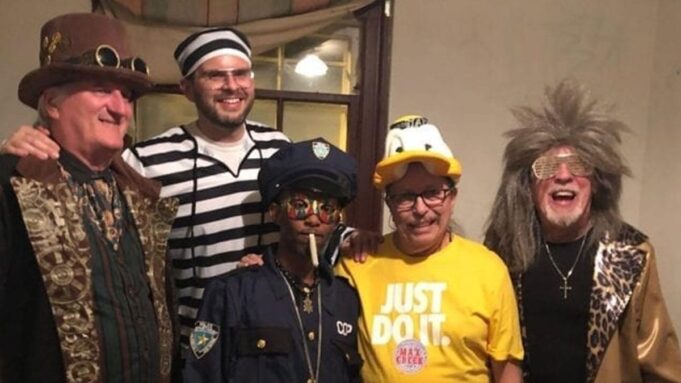 As a live music fanatic, my calendar is frequently bench marked by certain shows, days, events. For some, June may have a circle around Bonnaroo, or May and September would be Strangecreek and Wormtown. For a Max Creek fan, nearly all of the circles are Creek shows. The band has done a phenomenal job over the years of catering directly to their fans and supplying occasions for nearly every show to be special: New Year’s Eve, Camp Creek, the Boston boat cruise, an annual visit to Ocean Mist, or in this case: Halloween!

So I dressed up in my going out clothes, not necessarily a costume- and headed down to Northampton to the Pearl Street Ballroom. We had a nice dinner down town with friends, and made out way into the club. Even early the show seemed to be more well attended and the crowd was replete in costome. I saw an olde English gentlemen, a banana, Rowdy Roddy Piper, demons and ghouls, and every manner of costume.

The band took the stage in their own creative clothing: drummer Bill Carbone was dressed in classic 1900s prison garb with the horizontal stripes, his counterpart on percussion Jay Stanley was dressed as a police officer. Mark Mercier on keys had a crazy wig, jacket and sunglasses combination that made him look like he was in a space band, or perhaps a muppet; Scott Murawski was pulling off a steam punk vibe, and ever the classic John Rider was dressed in a duck costume. What a great time!

The show opened and about 10 seconds before the first note I could just feel it: “She’s Here.” Scott Murawski opened the show with the same song as the very first time that I saw Max Creek back in 1988 in Providence RI on a WED night at the Living Room. Just a couple of songs into the set (see the set list below provided by Dave Bonan) Bob Gosselin, former drummer for the band, came to the stage and sat in for the song “Morning Star” on both drums and lead vocals. Some fans have remarked at the true rarity of the song in the Creek set lists.

Gosselin stayed up for John Rider’s “Dark Water”, and into “Folsom Prison Blues”. Drummer Bill Carbone came upfront and center and sang the Johnny Cash classic, and it was perhaps the best vocal I have heard from him to date, with Gosselin staying on to take care of the drumming duties will Carbone sang his heart out. After the song was over, Officer Stanley came up and ‘arrested’ Carbone with hand cuffs and everything, and led him ‘away’ for a moment before Gosselin gave the drum throne back to Carbone. These are the moments that make Max Creek special and particularly these specialty nights truly unique.

The set continued with another rare choice. Mark Mercier sang the Tim Hardin authored song “Reason to Believe.” I didn’t recognize it, but some will notice it from versions released by Rod Stewart and others. Next up was Murawski’s epic song “The Field” which is a personal favorite and this night’s version was a gem. The first set concluded at an hour plus with John Rider’s rollicking “Slow Down.”

Set break was a chance for friends to catch up with each other and hang out. A recent update in regards to the policies at the Pearl Street enabled fans to go outside for air or a smoke and still return to the show. This makes for a much more welcoming atmosphere and it’s clear that the band and the venue have worked together in order to make the experience as good as it can be.

Set two was great and full of energy. The opener was “Got My Mojo Working” with Mercier singing. “In Harmony” was great and lead into “Peaceful Warrior”. I have to say, it was easily the best version of the John Rider song that I have heard that I can recall with incredible solo sections by Scott Murawski on guitar and John Rider’s face and stage dancing moves illustrated his joy at this version and this night. The set progressed with one song after another, including several song that seem more rare, a lengthy drum solo by Carbone and Jay Stanley, and a set closer of the Max Creek classic, “Windows.”

Even though it had been nearly four hours of show already (okay, probably only 3+ in music, but still) the band was not done. The encore kept the crowd with the rock and roll classic “Wipeout” which I do not think I have ever seen the band do in what must be my one hundred shows. The version was enthusiastic with tom rolls echoing the ballroom and solos from the front guys exploring the surf jams with ease. And finally, to pull the night into a full circle for me- the Warren Zevon Halloween classic “Werewolves of London.”

Why is this a full circle? Well, the band opened the show with my personal first show opener “She’s Here.” And with this closing song they also played the first show closer for me- thirty one years have gone by in a flash and the whole time Max Creek has been my constant musical friend- whether on a special occasion or a regular random show that I have been able to attend. Sated and smiling we drove back home through the late night darkness of New England, happily dreaming of our next calendar circle and our next visit with our live music best friends, Max Creek.

So I got almost all of the show on audio recording above. Because of battery issues I missed a few songs from second set, sorry!

Set II 1139pm
I Got My Mojo Workin, In Harmony > Peaceful Warrior > Long Black Veil, The Bees > drumz, Down on the Farm > Guilded Splinters, Big Iron, Windows 129am