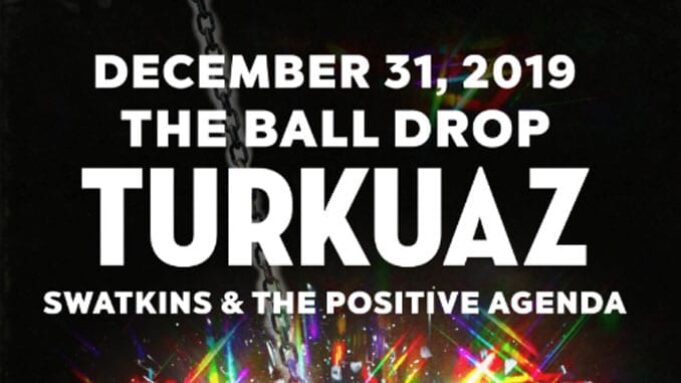 To ring in 2020, Turkuaz announced today that they will host their annual Ball Drop extravaganza at the Boulder Theater located in Boulder, CO on December 31st, 2019. Swaktins & The Positive Agenda, fronted by Steve Swatkins of the Allen Stone Band, offers support.

“Each year, The Ball Drop is a special event for Turkuaz and an amazing opportunity to have all our friends and fans alike under one roof–and this year will be no exception,” Turkuaz frontman, Dave Brandwein states with enthusiasm. “For the first time, we’re holding the celebration outside of the greater Northeast, we couldn’t think of a better place than Colorado. With our good friend Steve Swatkins joining the bill, this night will certainly be a party to remember!”

The band rang in 2019 at The Palladium in Worcester, MA, while 2018 was welcomed at Rams Head Live in Baltimore, MD. To ring in 2020, Turkuaz is excited to make their debut headlining performance at the Boulder Theater.

Tickets for this year’s Ball Drop bash are on sale this coming Friday, September 6th at 10:00 am MT via the band’s website: turkuazband.com/tour.

A limited quantity of fan pre-sale tickets with lower ticketing fees are available now, alongside the “Make You Famous” VIP upgrade package. Purchase of a VIP upgrade includes: access to a VIP soundcheck party with hours d’oeuvres & bar, early entry to the venue, meet & greet with all members of Turkuaz, a signed, limited edition show poster, preferred VIP viewing area, commemorative VIP laminate, and a premium champagne toast at midnight.

More information on the fan pre-sale and VIP packages is available at turkuazband.com and on the band’s official Facebook page.

Additionally, due to the overwhelming demand for the band’s feature film debut–which caused the event to sell out instantly–Turkuaz has released additional tickets to the None’s A Ton New York City premiere taking place on Tuesday, September 10th.

For this very special film debut, fans are invited to join members of Turkuaz and the film’s co-director and Executive Producer, Dani Brandwein, for the screening film premiere of None’s A Ton over dinner at the lovely Nitehawk Cinema located in Prospect Park, Brooklyn.

Fans are encouraged to dress to impress! Before the film, fans are welcome to strut down the red carpet and directly after the film premiere, fans have the opportunity to participate in a Q & A session with band members and the film’s directors.

VIP upgrades include a meet & greet opportunity, photo with the band and a signed movie poster, in addition to the above offerings. Please note, VIP ticket holders must also purchase a GA ticket.

Find a full list of upcoming dates below and head over to the band’s website for tickets and more info on specific dates: turkuazband.com.