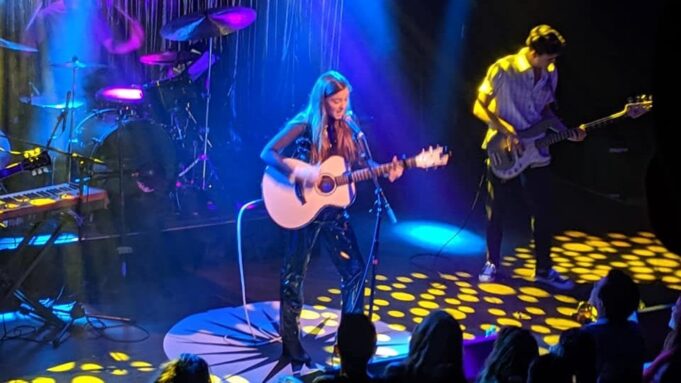 Jade Bird, songstress from England who’s conquering the States, played the third date of the second leg of her U.S. tour at the Paradise last week. Not just a vocalist, she also played guitar and keys.

She had three other musicians accompanying her on guitar, bass, and drums.

Including the 2-song encore, Bird played for about 80 minutes in one electrifying set. Flyte from the UK, 2 guy guitar singer songwriter duo, opened up for her and her band.

Jade played heavily from her April 2019 debut album.  She also played some new songs, including ones being performed in public for the first time.  As a tribute to the legendary club, she performed Blondie’s “Call Me.”

She had good energy, enthusiasm, and her voice sounded really good.  The drummer appeared to be brand new and was consulting a monitor with what I assume was music at the beginning of each song, joining in after a few measures, but rocking right along.

While Jade’s sound was good, for unknown reasons the sound guy had the bass turned up way beyond 11.  Some would argue that you shouldn’t feel the bass in the soles of your feet, but most would admit that you shouldn’t have your pelvis bone vibrate.

The crowd was not sold out, but it was a decent size and had lots of energy. Many knew the lyrics and sang and danced along to her more well-known songs. All in all, it was a great night of female-driven energy.