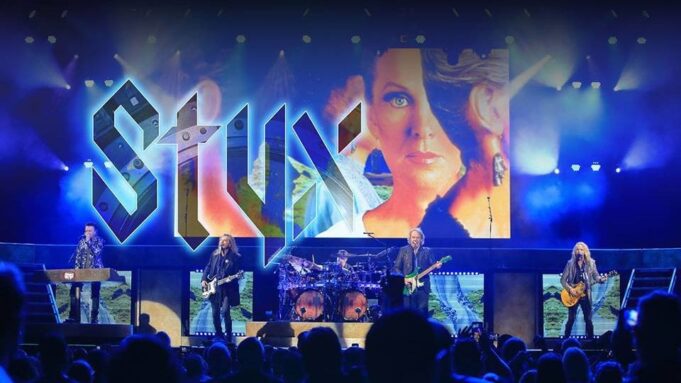 Styx performing ‘The Mission’ in its entirety for one night only in Boston November 9, announce extensive tour dates.

Legendary and multi-Platinum rockers STYX–Tommy Shaw (vocals, guitars), James “JY” Young (vocals, guitars), Lawrence Gowan (vocals, keyboards), Todd Sucherman (drums) and Ricky Phillips (bass), along with the occasional surprise appearance by original bassist Chuck Panozzo—are continuing on their never-ending “mission” to bring their music to their loyal fans in 2020 with new tour dates that will keep them on the road throughout the new year.

STYX will launch their 2020 tour in the same place they launched their 2019 tour: at the Celebrity Theatre in Phoenix, AZ on January 10.

Earlier this year, STYX returned to the Pearl Concert Theater at Palms Casino Resort in Las Vegas, NV to perform their new album, THE MISSION, which critics have called “a masterpiece,” in its entirety for the first time ever as part of a sold-out two-act concert event. The second act featured all of STYX’s classic hits. The band will now be giving their East Coast fans the chance to witness the unforgettable concert for three shows only: Thursday, November 7 and Saturday, November 16 at the Theatre at Westbury in Westbury, NY, and Saturday, November 9 at the Orpheum Theatre in Boston, MA. VIP packages and tickets are currently on sale on the band’s official website, and tickets are available on Livenation.com.

“The show in Las Vegas was so awesome, we wanted to share it with our East Coast friends as well,” says guitarist/singer Tommy Shaw. “Now we can say, this is the day…we’ll be bringing ‘THE MISSION: Live’ to Westbury and Boston!”

STYX returned to Europe earlier this summer for two sold-out headlining shows in London, U.K. and Oslo, Norway, and they performed as part of the Sweden Rock Festival. The first show in London—which was described by the Daily Express as “majestic”–was the first time STYX headlined their own show in the U.K. since 2005 and their first performance since their co-headlining tour with Journey and Foreigner in 2011.

Their ongoing tour continues in support of their 16th studio album, THE MISSION, their first in 14 years which is the band’s most ambitious, most challenging, and most rewarding album to date. It was released June 16, 2017 on the band’s label, Alpha Dog 2T/UMe. It debuted on various Billboard charts, including: #6 Top Rock Albums, #11 Physical Albums, #11 Vinyl Albums, #13 Current Albums, #14 Billboard Top Albums, #16 Retail, #17 Mass Merch/Non-Traditional, #29 Digital Albums, and #45 Billboard 200 (includes catalog and streaming). A special two-disc reissue of THE MISSION was released on July 27, 2018 via Alpha Dog 2T/UMe, which includes a CD of the original album, as well as a Blu-ray of THE MISSION mixed in 5.1 Surround Sound by singer/guitarist Tommy Shaw and producer Will Evankovich accompanied by stunning visualizations for each of the album’s 14 songs based on the album artwork. Other extras on the Blu-ray include: “The Making of The Mission Documentary” of exclusive interviews of Shaw and Evankovich, four music videos—“Gone Gone Gone” (official video), “Gone Gone Gone” (video created by NASA), “Radio Silence” (lyric video) and “Radio Silence” (live video from Syracuse, NY)—and three hi-res audio playback modes.

Check out STYX at any of the following stops early next year. Stay tuned for announcements about many more tour dates to come!