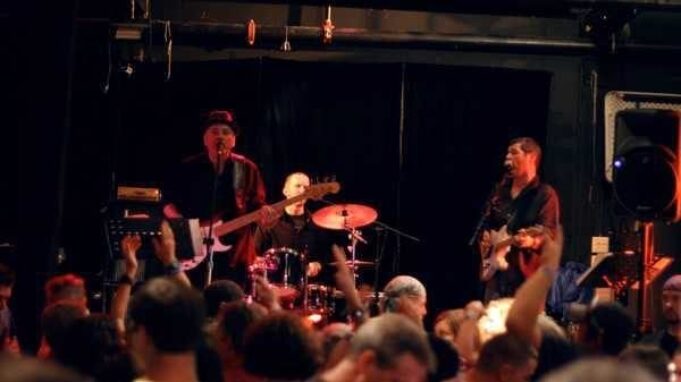 On August 22 2019 the MILES band performed at the Whetstone Station in Brattleboro, VT.

I surprised my wife and her friend by tagging along on their typical Thursday night ladies night when my band rehearsal didn’t pan out- crossing a pair of state lines in a short thirty five minute ride to Brattleboro, VT. The Whetstone Station in Brattleboro has one of the most picturesque river views in the area, and their large upstairs patio allows for a large party to occur on a nice summer night like this one.

There was over one hundred people ready to have a good time that night, as the MILES band was performing. The demographic skewed a bit on the mature side, and also more professionals and home makers than hipsters for sure. This band was a perfect match performing at least two sets of accessible music from the 1970s to now. The material was on the dance-able and funky side of things with songs that included material by Stevie Wonder, Paul Simon, Billy Preston, and even Ben Harper and the Dead.

The band is tight and far better than you might imagine experiencing walking into any random joint on a Thursday night. The personnel included Zack Cross – Keyboard, Sean McLoughlin – Drums and Vocals, Tim Thrasher – Bass and Vocals and Miles – Guitar and Vocals. Rhythmically the band was super tight but allowing for a loose attitude that inspires audience movement and excitement. The vocals were particularly good with each of the three band members who sang showing a real background in voice beyond just jumping on a mic. I am also always a sucker for a drummer who can sing and McLoughlin’s ability to handle both at the same time is really quite excellent. Each musician is really a master of their instrument, and the full band blend far exceeded my expectation.

Mid way through the second set I grabbed my wife and led her to the dance floor as the band surprised us with our wedding song, Bob Marley’s “Is This Love?” This just reinforced that we were in the right place at the right time!

The joint was jumping, my lady appreciated my being the designated driver and I would not hesitate to return to the Whetstone to see a band, or to see the MILES band again.

Master Blaster (Stevie Wonder), Will It Go Round in Circles (Billy Preston), Steal My Kisses (Ben Harper), I Won’t Back Down (Tom Petty), Signed Sealed Delivered (Stevie Wonder), Medley (including Fly Like an Eagle and more), Late in the Evening (Paul Simon), Is This Love? (Bob Marley), Scarlet Begonias into Fire on the Mountain (the Grateful Dead), Hard to Handle (Otis Redding done in the Black Crowes version).

Upcoming shows for the MILES Band.