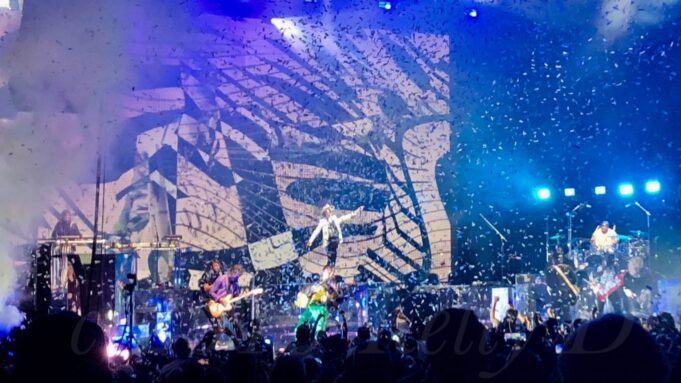 Until this month, I had never seen Beck live- a deep regret, as he is absolutely one of my favorite artists of all time. Thus, when I found out he was going to be touring this summer with Cage the Elephant and Spoon (another fave of mine), I was determined to cross his name off my concert bucket list.

My chance came in mid-August, when I realized that the “Night Running” Tour would stop in Saratoga Springs, NY at one of my all-time favorite places to see a concert (are you getting a theme here, about favorites? Spoiler alert: it was a great night).

We upgraded our lawn seats as soon as we entered Saratoga Performing Arts Center; perhaps because it was a summer evening in August, on a Monday, the powers that be had a sheaf of tickets that folks could upgrade into for just $20 on top of their lawn seat admission. Stevie, my partner, and I jumped at the chance and were rewarded with a pair of seats about 25 rows up from the pit. (However, it must be said that there are no bad seats in SPAC.) After milling around and enjoying the beautiful grounds, we saw Sunflower Bean open the night’s festivities.

I had seen them in September 2017 when they opened for Pixies in Northampton, MA (read my review here) and I was pleased to see their raw energy was higher than ever. I think the band members were peeved and/or perplexed that hardly anyone was standing at this point. I ended up standing for some of their last few songs, and if I’m not mistaken their keyboard player may have pointed to me and shouted his approval from the stage. Who knows, but I appreciated his fervor (especially when he literally picked up his rig and played it like a keytar for an extended period of time).

Spoon began their set about half an hour later with an enormous banner with their band name scrawled across it hanging behind them. Their dry, at times even acerbic, indie rock has appealed to me for some time so it was a damn treat to see a bunch of my favorite songs of theirs performed live, including “The Underdog,” “Do You,” “I Turn My Camera On,” and the cryptic “Hot Thoughts.” There have been many a singalong with my circle of friends, complete with handclaps, to that one since it came out in 2017. They began their time onstage with their new song “No Bullets Spent,” from their just-released greatest hits anthology Everything Hits at Once. Their brief ~45-minute performance ended with the meditative beat of “Inside Out,” with its trance-like harp accompaniments. . . and off they went.

Cage the Elephant was next. The stage appearance changed yet again, this time with a setup involving a multitiered metal staircase and PYRO! Matt Shultz, their enigmatic frontman, came out in an outfit that I can only describe as “apocalyptic beekeeper.” Almost every part of his person was obscured in some way and he darted from one end of the stage to the other, occasionally pulling down some piece of the mask he was wearing to reveal his mouth or his eyes. I marveled that he didn’t perish dead away of hyperthermia, then was relieved when he began stripping down to less cumbersome costumage.

For as little as I knew of CtE’s music, I enjoyed their performance tremendously. The pyro that heralded their arrival onstage set the scene: this was a band that had power. The audience by this point was largely on its collective feet, singing along, and even helping Matt Shultz climb through the crowd for perhaps the longest continuous crowdsurf session that I’d ever seen if not ever. Seriously, he traveled from the pit up to the lawn, long after the other band members had vacated the stage. That’s dedication, especially since they had just crushed 19 songs in their set.

At long last, Beck and his band made their grand entrance- to “Loser” of all songs. Might as well get that one out of the way, eh? It’s always a crowd-pleaser. The stage was once again changed, this time with platforms for various band members to be on- namely Chris Coleman, his drummer who gladly showed his prowess during the self-referential lyric “that was a good drum break” in “Where It’s At.”

It was “happy, poppy Beck” on display this time around, no gloomy or contemplative songs from Sea Change or Morning Phase to slow momentum. No no, this tour featured all sorts of jams from Midnite Vultures, Guero, and his last full release Colors, that came out in October 2017. He sang “Saw Lightning,” from his upcoming album Hyperspace, early on in his performance, all in a rapid-fire collection that included “Girl,” “Dreams,” and “Wow.” Stevie and I hardly stopped dancing.

On a personal note, I loved that Beck included a brief, ad libbed version of his cult favorite “Debra,” a total sendup of Prince’s breathy falsetto sex-fixated sensibilities (as, indeed, that seemed to be the point of all of 1999’s Midnite Vultures). The tune details a milquetoast would-be suitor who just wants to get with Jenny, and maybe her sister Debra too. A local band, called Rodd Cummings and the Vibrators, has included it in their setlists for years now and ever since I have made my intense love for the song known, they’ve always dedicated it to me at their shows.

Perhaps the climax of the show came when they played the noisy, Nine Inch Nails-meets-Dandy Warhols “E-Pro” and dozens of large monochromatic balloon balls fell onto the audience (not our section though, something that Beck tried to remedy by suggesting that instead of stabbing them, maybe they could try hurling them over to our side of the venue?) in a spectacular fashion. After a quick fake-out, the band came back onstage to have some of their special guests sing with Beck. Gotta say, I would not have expected a hyperspeed duet between Britt Daniel of Spoon and Beck of Elvis Costello’s “Pump It Up,” but here we are. Just as quickly, it seemed, Beck had Matt Shultz come back onstage to perform “Night Running,” technically a Cage the Elephant song but featuring two juicy verses featuring Beck himself. Then BOOM! We were showered with confetti, treated to a reprise of “Where It’s At,” and fin. It became a mad dash to get back to our car amidst the throngs of people, and our gallivant through the Saratoga Springs State Park before the concert netted us a primo parking spot: all was well.

See more of Kelly D’s videos, including “Pump It Up” at her YouTube channel here.

All in all it was a fabulous evening. I did notice the sound left a little to be desired, including screechy microphone feedback. Beck also appeared to forget some chunks of verses throughout his set but hey, no one’s perfect. To have four top-notch bands perform under one roof, in a beautiful historical location, for not a whole lot of money, I am deeply appreciative. And may this first time seeing Beck live turn into many more.