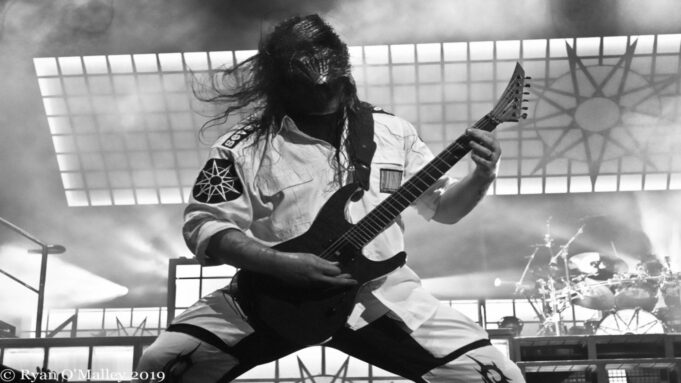 Check out a full gallery of photos by Ryan OMalley here.

Over the past twenty years, Scranton, Pa. has become a frequent stop of nu metal gods Slipknot whenever they embark on a summer outing. Such was the case this past Saturday when the nine piece outfit brought its Knotfest Roadshow to The Pavilion at Montage Mountain for an intense night of metal and mayhem.

Instead of hosting their annual Knotfest at one venue, Slipknot decided to bring all the chaos of the festival – and some of their cohorts – on the road for the better part of the summer. Behemoth, a powerhouse band from Poland who is nearing their 30th anniversary, kicked things off around 5:30 in the evening for those who couldn’t wait to be assaulted by metal riffs and pounding percussion. Although they were the first band on the lineup, Behemoth certainly lived up to its reputation (being banned from Russia, and having Polish government trying to censor them due to satanic themes in their music).

After a brief intermission, Gojira took the stage and put in what some felt was the performance of the night. Hailing from France, Gojira is a four piece bookended by brothers Joe Duplantier (guitar/vocals) and Mario Duplantier (drums/vocals), who have one of the most energetic stage presences in modern music. Between members constantly throwing up “devil horns” and bassist Jean-Michel Labadie’s intensity, the band whipped the nearly 12,000 person crowd into frenzy with its heavy rhythms and barrage of speed guitars. While the band has been serving as openers for everyone from Slipknot to Metallica, Gojira has headlined numerous US outings of their own, and if the reception they’ve been getting on this tour is any indication, the band should be on its way to bigger gigs in the near future.

Arguably the “lightest” band on the bill, Denmark’s Volbeat took the stage to an appreciative crowd who might have viewed the bands set as a welcome relief to all the thrashing and speed metal the previous two acts provided. Vocalist and guitarist Michael Poulsen, who arguably has one of the most distinctive voices in modern metal, had the crowd charged up from the opening number, 2016’s “The Devil’s Bleeding Crown.” Proving how different their music is from the rest of the lineup, “Lola Montez” sounded like something you would hear on Top 40 radio rather than as part of a Slipknot show. Regardless, Volbeat sounded like a well-groomed act that not only had people head banging, but also singing along to Johnny Cash’s “Ring of Fire” which served as a precursor to the rockabilly feel of their original number, “Sad Man’s Tongue.” Coming fresh off a newly released album, “Rewind, Replay, Rebound,” Volbeat received a warm reception with the beginning of the album’s lead single, “Last Day Under the Sun.” Again, the track sounds like something from mainstream radio – which it is – but is a drastic departure from the neo-death metal of the other acts on the bill.

Hidden behind a black curtain with the bands signature logo, the house lights dimmed and the industrial noises compounded with screaming from band member Sid Wilson that mark the track known as “515” took over the speakers as the curtain dropped and Slipknot segued into the next song from 2001’s “Iowa” album, the intensely heavy “People = Shit.” There is no denying that the “Iowa” album is one of the heaviest albums of the last 18 years, and has become the go-to record for Slipknot’s fans, warmly referred to as “maggots.” Going back to their self-titled 1999 release, the band kept the energy up with a rollicking run through “(sic),” complete with the crowd yelling the opening of “here comes the pain!” It was an appropriate lead in to the b-side track “Get This” which yielded one of the biggest pits of the evening.

Probably most impressive about Slipknot in 2019 is the fact the band has the number one album in the country, We Are Not Your Kind- a feat that was unimaginable in 1999. The accomplishment alone is a testament to the bands loyal fan base, and shows that throughout the country people will never let heavy metal fade to obscurity. With the album being a relatively new release, the band chose to not saturate its set with too many new cuts, sticking to the singles “Unsainted” and “Solway Firth.” The three song assault of “The Heretic Anthem,” “Psychosocial,” and “The Devil In I” provided the crowd with an opportunity to scream along with vocalist Corey Taylor, whose voice sounded in top form which should put to rest the rumors of Taylor not being able to handle the intensity of Slipknot’s music.

Eventually, the band’s older material – “Prosthetics,” “Wait And Bleed,” “Sulfur,” “All Out Life,” and “Duality” – brought the main set to an energetic close. One of the most fascinating things to witness during a Slipknot show is the way Taylor has complete control over the fans, with the best example being any time the outfit performs the early hit “Spit It Out.” The show in Scranton was no different with Taylor telling the crowd to get down near the floor until the ending refrain where he screams “jump the fuck up!” After nearly 90 minutes of head banging, moshing, crowd surfing and other craziness, it’s amazing to see how the crowd still has the energy to hang on every word of Taylor’s. As a final ode to their 1999 album, Slipknot left the crowd with the fan favorite “Surfacing,” which featured both screaming and actual singing from Taylor, who is more than capable of sounding like a normal rock singer along with his growling.

For a band that’s known for its intensity and chaotic live shows, Slipknot has carved its place into heavy metal history. Their tours are always unpredictable and seem to be akin to folklore as it has to be seen to be believed. More than 20 years into its career, Slipknot is unapologetic in the way it presents itself to the public, and this year’s Knotfest Roadshow may just be the start of the next chapter in its highly respected career.

Check out a full gallery of photos by Ryan OMalley here.