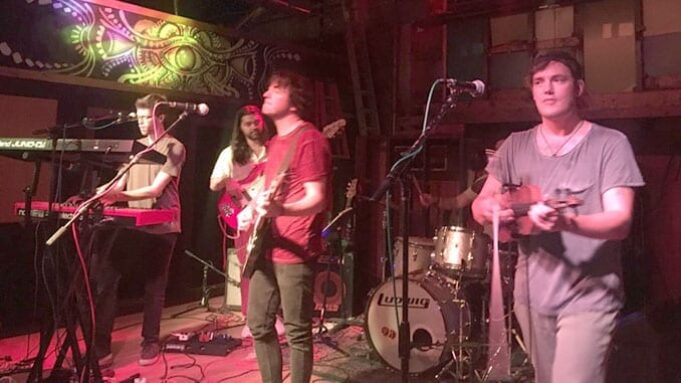 For the past few months I had been hearing a faint buzz about a band with a bit of a different twist. It was this past Saturday in the comfort of my home venue, Electric Haze in Worcester, that I got to witness this act first hand. And believe me, the hype was real. Weird Phishes, the five-piece out of Boston, is a real oddity when it all comes down to it.

They take two completely different genres of music and combined them into a dance party for the ages. The two genres you ask? They take the brilliantly written yet sometimes morbid and often sullen lyrics of Radiohead and completely rework them into jammy, danceable grooves—all the while adding Phish songs in the mix. It’s quite a mash up that leaves you questioning how this works so brilliantly, but loving every minute of it. It takes you on a musical journey through Willy Wonka’s ferry tunnel wondering what will come up next—frightening and mesmerizing all at once.

Not from this show, but still fun:

I knew the concept when I walked in, yet had no idea what was in store for the evening. That sometimes can be a setup for real disappointment. Hoping for one thing, then seeing something completely different. My friends, this was not the case. I was in awe from the first note. Weird Phishes is talent, creativity, bravery, and a whole lot of fun mixed into a tight package.

Opening with Airbag, off Radiohead’s iconic 1997 release OK Computer, I knew i was in for a real banger. After my initial shock wore off I got my dancing feet. My first taste of Phish came sandwiched in between Paranoid Android and has always been one of my favorites. Tweezer exploded effortlessly down from the stage and sent the hairs shooting up from the back of my neck. The question was never why would they do this, but how? And with such grace and ease.

From there the hits kept on rolling along. Fluffhead into Karma Police into You Enjoy Myself / Fitter Happier. Who does that? It’s kind of weird and still mesmerizing to hear it. How about a No Surprises and Simple mash up? Yep, not too sure how one even comes up with that. They straddle the boundaries of strange and cool like some sort of cult phenomenon making for a memorable night. Not too many people would think that would or could work, but here comes Weird Phishes pulling it off with style. Believe it or not, the band, which is comprised of PJ Holaday on drums, Pat Pingeton on bass Derek Dupuis  on  Keys/Vocals, Josh Knowles on  Violin/Vocals, and Alex Glover on Guitar/Vocals only got its start earlier this year in January and came about as a joke between friends.

“The premise came about as a total joke based on the punny name,” Glover said. “I was trying to force my love of Phish on Josh, who loves Radiohead (as do i). And was joking about a cover band called Weird Phishes. I took the joke too far by arranging a funky Paranoid Android and realizing that it worked really well. So I called up a local Boston venue and they thought it sounded like a great idea! There wasn’t even a band in place by the time we were booked. That was for our first show back in January. ”Since then Weird Phishes has been picking up some serious steam through not only curiosity, but word of mouth. Be sure to catch these guys when ever you can. Their next shows are coming up at the beginning of August.

Friday, August 2, they’ll be at Jewel Music Venue in Manchester, NH and Friday, August 16, you can catch them on a boat in Boston Harbor for Rock On! Concert Cruise.

I could go on and on, but will spare you my fervency for another time and leave you with this memorable set list:

Not from this show, but still fun: