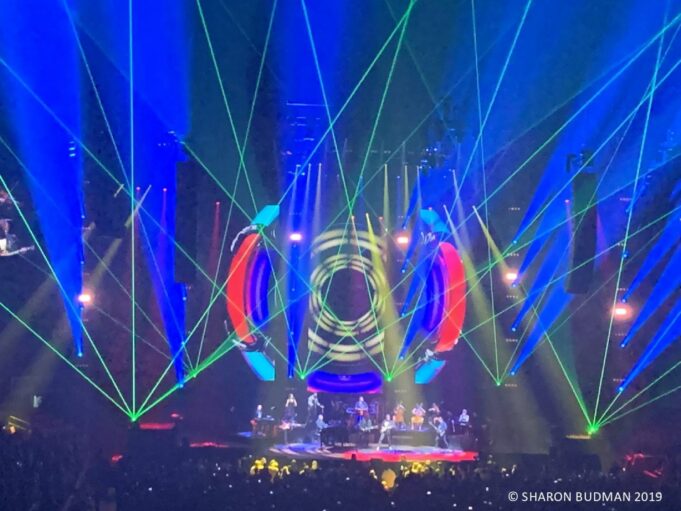 “How ya feeling, Sunrise?” Dhani addressed the audience. Opening for Jeff Lynne’s ELO, was the band known as Dhani Harrison.  Who is Dhani?  He is the only child of the late George Harrison and his wife Olivia.  But, you may also recall that Dhani Harrison presented at the Rock and Roll Hall of Fame Induction of ELO on April 7, 2017.  The family history goes way back.

Dhani Harrison opened the show this evening with a full set of their original music. For many, it was their first introduction to the band and its music. The 5-member band, perhaps best categorized as Alternative/ Indie Rock, exposed the audience to their incredible talent. Dhani Harrison released his first studio album “In Parallel” back in 2017.  Tonight, Dhani announced that they were quite excited to be on tour as it coincides with the dropping of their latest track on Friday, July 12, 2019, Motorway (Erase It).

After a short break, just enough to re-set the stage… we were on with the show. After seeing Jeff Lynne’s ELO back on September 18, 2016, at the infamous Radio City Music Hall in NYC, I was left mesmerized by the lights and sound.  Fast forward two and a half years later, Jeff Lynne’s ELO 2019 North American Tour and I surely wasn’t gonna miss it.  This was a first for Jeff Lynne’s ELO, as it was their debut at the BB&T Center in Sunrise, FL.  Though the show did not appear to be sold out, the arena was full.

I don’t know about you, but I boarded the spaceship and boy did we get a ride tonight and, in my humble opinion….well it was Out of this World.  You see, it isn’t just a band, it’s Jeff Lynne’s Electric Light Orchestra (ELO).  We were treated to an extravaganza of light and sound.  Jeff Lynne’s ELO, under the direction of Mike Stevens, took us on a journey, a high energy trip back in time… and what a great feeling it was.

We were treated to many of our favorites and then some. One highlight of the show was when they were joined on stage by Dhani Harrison to perform, “Handle with Care,” a Traveling Wilburys cover.

The orchestra was outstanding and the accompanying light show, which included laser lights, was incredible. The songs that filled the air took us down memory lane. The crowd could not get enough of this stellar performance.

There was so much top tier musical talent on that stage.  Their synergy was terrific. The set list included 20 tunes including the encore, “Roll Over Beethoven” a Chuck Berry cover that left the crowd on its feet wanting more.  Such a wonderful super-charged night in Sunrise. Worth every penny.

Jeff Lynne’s ELO is half way through their Summer tour. If you have the opportunity to catch a show. – don’t think twice – do it. It will undoubtedly “Shine a Little Love on your Life!”