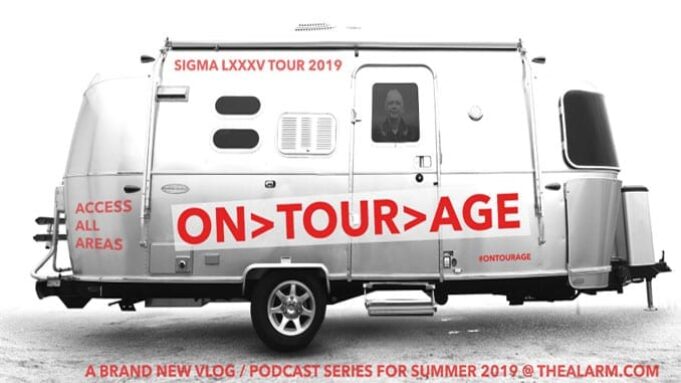 On July 18th 2019, The Alarm will launch ‘On>Tour> Age’ -#ontourage, the first in a series of Vlogs & podcasts (available from The Alarm You Tube Channel and all good digital media outlets including the official alarm Facebook page), that will be broadcast throughout the length and breadth of the Sigma LXXXV Tour 2019.

The first event will go out ‘live’ on July 18th from Sun Studio in Memphis, Tennessee, where Mike Peters and The Alarm will pay homage to Elvis Presley, their friends U2, and a host of significant others, who have all made the pilgrimage to play at the birthplace of rock and roll.

Fans are encouraged to send suggestions for songs / artists to be covered to twitter.com/thealarm and tag posts with the hashtag #ontourage and any other artists identifiers and song links as deemed appropriate.

Utilising all the modern and accessible camera technology to create vital content, ‘ON>TOUR>AGE’ will be hosted by none other than Gareth Jones who will be the official MC, presenter and tour guide, taking viewers behind the scenes and into The Alarm’s touring and recording world to interact with band members, and all the other essential characters who make a tour like Sigma LXXXV 2019 possible.

Ever wondered what it’s like to go on tour with a rock band across America?

This summer, the ‘ON>TOUR>AGE’  film crew with Gareth Jones as presenter, will hit the road, coast to coast with Mike Peters and The Alarm, taking in 40 shows in 40 cities, broadcasting findings and observations to the world and streaming daily on the Internet.

The Alarm and presenter Gareth Jones are no strangers to the USA, having  first arrived in 1983, as guests of Bono and U2 for the War Tour, creating a constant presence on the continent ever since.

What’s changed? Well,  ‘ON>TOUR>AGE’ in association with Mike Peters and The Alarm, will contrast and compare as they bounce along the interstates and highways, headlining a massive 8 week tour of ballrooms, theatres and festivals.

‘ON>TOUR>AGE’ will also be co-hosted by Jules Peters – breast cancer survivor and Alarm keyboard player who (along with husband Mike Peters MBE), was the subject of two very recent, high-profile BBC documentaries, including the award winning US movie – Man In The Camo Jacket.

The ‘ON>TOUR>AGE’ entourage, features a host of formidable and humorous characters such as charismatic drummer Smiley who has performed with Robbie Williams and Joe Strummer. The ‘youthful’ James Stevenson of Generation X and The Cult (who can lay claim to having played guitar for 72% of the world’s bands), not to mention being a connoisseur of fine drinks and vintage instruments.

This innovative and intimate podcast series will give unrivalled access to the band and their entourage, telling their unique story and the rock and roll adventures that happen to them, in real time, on film and in vlog / podcast format.

Blasting out daily missives from the road, the truck stops, the diners, record stores and radio stations as they go about their business, not to mention playing concerts at some amazing iconic venues such as Sun Studio in Memphis, Tennessee, where Elvis Presley put together the first three chords of world changing music.

In addition, The Alarm have launched a very special exclusive You Tube Playlist featuring 33 tracks from all three bands – The Alarm, Modern English and Jay Aston’s Gene Loves Jezebel that will all feature on this summer’s forthcoming Sigma LXXXV Tour 2019.

The Alarm have also recorded their very own special versions of the Modern English classic ‘I Melt With You’, along with a stripped back reading of the 1983 Gene Loves Jezebel single – ‘Screaming For Emmalene’.

Both tracks can be heard now exclusively on the official Alarm YouTube Channel and viewed on this page along with a premiere presentation of the widescreen edit of The Alarm classic ‘Spirit Of ’86’, edited and enhanced by Gary Overington.