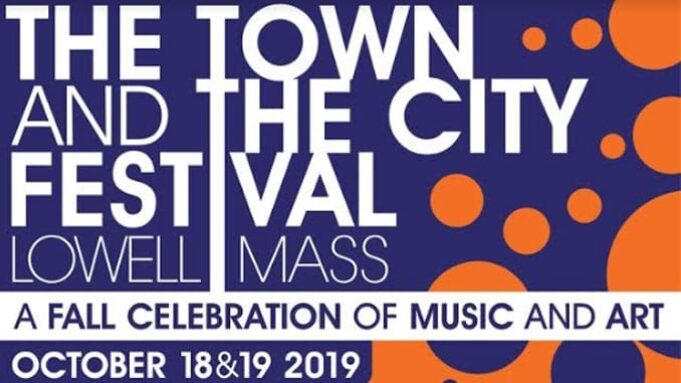 Preliminary Artist Lineup Announced for The Town and The City Festival in Lowell, MA October 18 & 19

Celebrating the adventurous spirit of Lowell native author Jack Kerouac, the line-up for the Second Annual The Town and The City Festival, will bring together more than 50 locally-based and national touring acts for performances throughout multiple venues in downtown Lowell, MA.  Produced by Porter Productions in association with the Greater Merrimack Valley Convention and Visitors Bureau, the festival will take place October 18-19, 2019.  A limited number of Early Bird Weekend Passes will go on-sale Friday, July 12th at 12 Noon  at www.thetownandthecityfestival.com.

“In 2018, the debut of The Town and The City Festival received an overwhelming resounding response from music fans, performers, the venues and the community,” said festival producer, Chris Porter, a Lowell native. “We quickly established that this event can stand alongside the other signature music events in the area like the Lowell Folk Festival and the Lowell Summer Music Series.  We’re thrilled to bring a signature event that helps to showcase much of what downtown Lowell has to offer and feature many performers from the area and beyond.”

The festival is named after the novel The Town and the City, the first major work published by Jack Kerouac.  The novel focuses on two fictitious locations, one being based on the ‘town’ of Lowell where Kerouac was raised.

Venues for the festival will include The Luna Theater, Christ Church United, Gallery Z, Donahue Family Academic Arts Center (at Middlesex Community College,) UTEC, and the Parker Gallery at the Whistler House Museum of Art which will host all ages admitted performances.  Other participating venues will be Zorba Music Hall, The Old Court, and The Worthen House Cafe which will host 21+ admitted shows.

A limited number of Early Bird Weekend passes for The Town and The City Festival in Lowell go on sale this Friday, July 12th at 12 Noon at www.thetownandthecityfestival.com.
Regularly priced Weekend Passes are $55 in advance and $60 once the festival begins. Single Day Passes and individual show tickets will be available at a later date.

Chris Porter has over 30 years of experience in the concert industry. Over 20 years of that experience has been focused on programming and producing festivals and special events. Some notable events include Bumbershoot (Seattle, WA), the LoDo Music Festival (Denver, CO), The Nines Festival (Ft. Devens, MA), and the Macefield Music Festival (Seattle, WA).  After working on Bumbershoot for 18 years, in 2015 Porter fully focused on his own company, Porter Productions, which offers talent buying, booking management, consulting, and production coordination for various events and venues in the United States.  Porter currently oversees the booking at ONCE Somerville in Somerville, MA  as well as a number of festival projects including Hardly Strictly Bluegrass (San Francisco, CA), WERS’ Wicked Good Festival (Boston, MA), South Lake Union Block Party (Seattle, WA) and The Town and The City Festival (Lowell, MA).