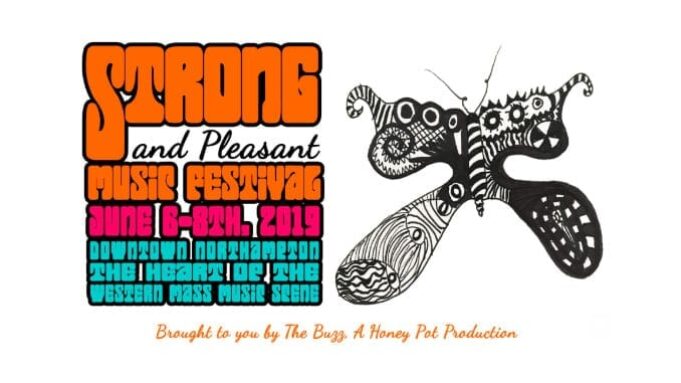 STRONG and Pleasant celebrates the streets in Western Mass that have been central to local original live music, Strong Avenue and Pleasant Street in Northampton MA. The festival is in the spirit of the original Northampton Music Festival, from the late 90’s, created by beloved late promoter,  Donal B. Rooke, who passed in October 2018. The weekend’s lineup is stacked with an abundance of Western Mass music and regional talent hailing from Canada, Boston, and New York, all converging in Downtown Northampton, MA.

The Buzz, A Honey Pot Production was originally born as a music fan ‘zine in 2014.  The Buzz most recently produced Local Honey Vol. 2 (2019), which was released with a showcase at Hawks and Reed in Greenfield, MA on March 30th. The compilation features 12 local area bands, including Eric Lee, Workman Song, Mad Habits, Lush Honey, Phenomena 256, Shantyman, Tidwell’s Treasure, Old Flame, Mamma’s Marmalade, Snowhaus, The Greys, and Humble Digs .  The freshman release of the series, Local Honey Vol. 1 (2016) made its debut at a music showcase gala event in the Union Station Ballroom in Northampton on February 13, 2016.  The Buzz also recently revamped their online magazine, www.TheBuzz413.com,  which is an extension of the zine’s vision to cover the original music coming out of the 413 and beyond.

The STRONG and Pleasant Music Festival is the natural next step in furthering the The Buzz’s mission of celebrating unsigned, independent artists coming out of the 413 area.

Advance sale tickets are now available at StrongandPleasant.com at the discount advance prices of $40 for a 3-day full festival pass (thu/Fri/Sat) and $30 for a 2-day weekend pass (Fri/Sat). Single-day passes will be available day of at any of the event locations.

Event Information
STRONG and Pleasant Music Festival
Northampton, MA
3 Day Full Festival Pass (Thu/Fri/Sat) $40
2 Day Weekend Pass (Fri/Sat) $30
Ticket Link
Facebook Event
Single Day Passes will be available at any of the event locations day of at the price of $10 for a Thursday Pass, $15 for a Friday Pass, or $20 for a Saturday pass.