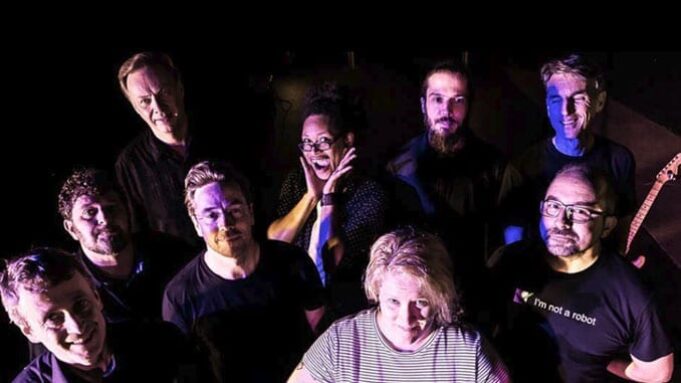 How many times in one life can a humble scribe get away with proclaiming, “…holy CRAP … this band is the BEST…”? I’m willing to give up one of my nine lives if I can shout it from the mountain tops for and about Soul Magnets. I assumed from the start that they had travelled in to New City Brewery from some home turf in Boston… Hartford, anyway. Tell ya what, tell me they’re from L.A. and I’ll tell you back, ‘no doubt here.’  This rollicking nine-piece ensemble is just about THE most exciting live music experience that can be had within whatever their stomping-ground (nay I say, boogie-ground) might actually be. And it turns out they are right at home here cuz they ARE home.

Soul Magnets are from right around here in Western Mass. They are every bit as fresh as a lot of their material was in the 80s. It’s easy to imagine them being a regular returner to Geraldine’s in West Springfield back in the day f’rinstance, and one of the most popular ones. A good bit of their repertoire is even fresher than that, being original compositions- with more in the works, of course. And the third half of their stuff sounds not one bit less fresh, even though it’s era of origin goes back a decade or two before the 80’s age. ‘Like what,’ one might ask? Hrm, well, when’s the last time you heard Sly and the Family Stone?

A couple of Earth Wind & Fire numbers confirmed an impression that was fast forming in my mind, and a couple of originals confirmed another.  The music of Soul Magnets is big, bright, bold and brassy; and the band is totally tight, no less expert and enthusiastic on their own numbers.  Everybody on the stage is clearly having big fun, with the two ladies up front happily bubbling along as they belt out vocals and harmonies with strong voices and clarity in their singing- not only did I hear the word “redacted” in one of their originals, I heard it so distinctly that I had no doubt about it, no “wait-what?” moment of dissonance. With lyrics like theirs, articulation matters.

This same clarity and distinction applies to every aspect of the band’s sound, even in a ‘loud’ room full of hard and reflective surfaces.  Each instrument is readily discernable in the mix, with sax and trumpet distinct when appropriate and all the horns summing up together when they should. Drums and percussion are distinguishable one from the other while working together for a total output filled with rhythm and power.

I thought of Boston and some of the bigger clubs there; and I thought of Terrafunk, natch, with the large-ish membership and no shortage of horns. Soul Magnets pull up short of Motown, though, and they stay on the smoother side of funk. Both those elements are part of their deal, but if we have to assign a genre-tag to it, this is Soul Music… strictly Soul, but with a reach wide enough to embrace pretty much any and every sub-folder in the Jazz library. Now, we gotta qualify that with a few further words for clarification…

This is jazzy dance music, high-energy and rock-solid instrumentation, “strong” to say the least; and it’s all ‘songs,’ as in structured compositions with words and fantastic vocals rather than being free-form, jammy or improv. We’re talking solid songs and solid choices, with originals punctuating the set-list, but it is impossible to pigeonhole this stuff or stuff it into a categorical box other than Jazz- how about Party Jazz, or Dance Jazz?  We can’t call it ‘vocal jazz,’ that’s it’s own thing; and it certainly isn’t disco… lovers of funk and all these other terms will find plenty to dig in this mix, but it won’t be narrowed-down to anything more particular than Soul Jazz.

It’s Soul Music that is so punchy and powerful, smooth and strong, tight and structured, energetic and loaded with dynamic that it must be Soul Jazz. Maybe a Soul Magnet is a practitioner of Soul Music with such a magnetic attraction for every other possible particle of anything like either Soul or its overarching parental class that a more fitting name can’t be contrived. I don’t suppose a category could be created called Soul Magnet Music…