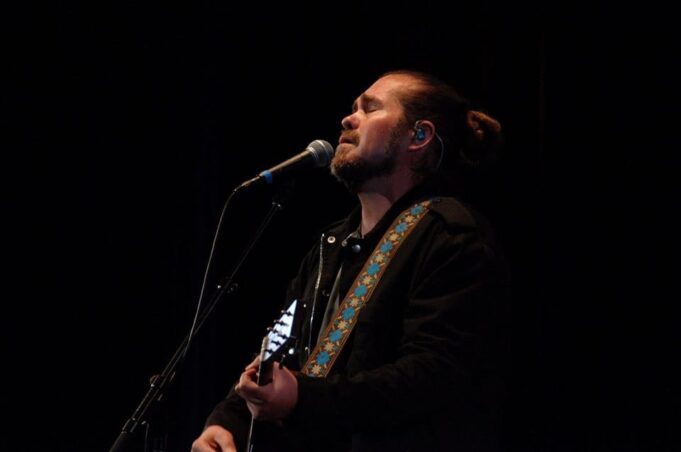 Performing live at the Academy of Music in Northampton MA on May 16th.

On Thursday May 16th I made my way to the Citizen Cope performance at the Academy of Music in Northampton, MA.  I have been listening to his music for several years and didn’t want to miss an opportunity to see him perform when he was nearby.  I arrived a bit before the show, in time to scope out some of the camera angles and get myself ready to snap a ton of shots.  The stage was set with a couple guitar stands holding guitars, a beautiful drum kit on a riser, an organ, a piano, bass rig, and DJ table.  Shortly before the show a smoke machine puffed some smoke that slowly rose into the air above the stage, making ghost-like shapes and swirling up to the rigging above the band’s setup.

The Northampton crowd was animated as usual as the band took the stage with no introduction.

The music of Citizen Cope is unique.  It is consistently mellow and soothing, never really locking into any singular genre that I can name with total confidence.   My first instinct says that it combines singer/songwriter and indie-folk, but then rethinking it and it’s actually more of a toned down melodic hip-hop than anything else.  It has been described as “urban-folk” by others, and I really feel like the urban part is indeed rap.  The songs are simple and pleasing tunes enveloped by synthesized orchestral sounds and floating piano riffs while the vocals weave in and out, emphasizing the downbeats and rhymes and the sounds of the words.  In a way, it reminds me musically of A Tribe Called Quest and at the same time a little bit like Ben Harper.

Clarence Greenwood’s vocal style is soothing, easy, staying primarily in his middle register.  The rhythms are slow and tend to rock to and fro, with a simple 4/4 count.  The lyrics are often repeated many times, almost as if he is treating them like mantras.  The songs are studies, more than compositions, that march around in circles trying to discover the deepest meaning of the words plucked from time in moments of reflection.  Many of his songs start with solitary guitar then add voice, slowly growing with the addition of each instrument, stating his observations repeatedly as though they are a single thought circling in his mind, growing to a point of liberation and then retracting back to his voice and quiet guitar strums.

What I especially enjoyed about this show is that the songs were performed in the way I had learned them.  My ears were pleased to hear the songs in just the same way my mind was expecting them to be… they were performed to sound like the recordings, and as a fan it was really nice to see and feel the hypnotic music in this serene space.  There was an ease to the performance that matched the songs, it lulled me into a sense of comfort.

The song “Let the Drummer Kick” is perhaps one of the most radio-played of all his songs, and the words of the title are supplemented with rhyming words:  “Elation, creation, incarceration, germination, equation, humiliation, reincarnation, situation, elation, identification, retaliation, education, inspiration… substitution…  confusion, delusion, solution…. respiration…situation… inspiration” …all the while a riding piano melody dances about like a singing bird above the words.

He played many of his more popular songs and was adorned with loving shout-outs from the crowd and moments of the audience singing along in unity.  People yelled “we love you” and “thank you” in adoration.  Though most of the show was incredibly mellow, by the end he had the crowd on its feet and many people had moved to the front and side aisles of the theater.

For the duration of the show I was moving about the theatre from one side of the front to the other, to the balcony and to the front during the encore set.  I was just enjoying the music and having fun with my camera, capturing moments of Clarence’s deeper expression. He is quite intense and focused most of the time as he performs, and combined with the simplicity of the set, I had to stay attentive in order to pluck these visually expressive moments from the body of the show.  Here are my favorite shots…my photographic review, if you will, of a show that was crafted perfectly to please any die-hard fan of Citizen Cope.

Bullet and a Target