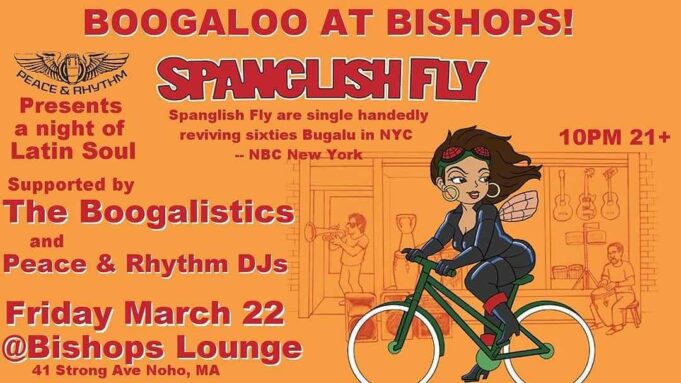 For some, like a certain humble scribe who hails from a very small and Yankee town, Bugalú the music style might could use a little explaining. Think 1960’s Nuyorican music (lol). Not quite there yet? OK. Figure an Afro-Cuban starting place going Americana in the streets of The City… Latino-Americana, shall we say. Highly Spanish/Latin, with a majority Cuban influence, melding with soul and R&B in NYC in the 60’s, and then never really fading. For a timeline with a few familiar names, we might think of it, loosely anyway, as developing across the decades of the 40’s and 50’s and coming to full fruition in the 60’s, as a thread running through artists like Desi Arnez, Tito Puente, and Carlos Santana – serious and groundbreaking artists all.

No, it’s not that simple, but that gives us a basic understanding. Peaking at the tail end of the 60’s, bugalú (or, yes, boogaloo) kept kids in the city busy in between the doo-wop days and the salsa cycle. Take the song, “I Like It Like That” (Tony Pabon and Manny Rodriguez 1967) and dig into the radio songs of the time and the greater surrounding genre; then find the 2016 film of the same name, and you will know a lot more than I do about this highly rhythmic, high-energy, highly dance-able marriage of musical styles.

The most mainstream and accessible example? One comes to mind quick and sure. Written by Puente in 1962, with its inspiration stretching back across the previous two-point-five decades, made super-famous by Santana in 1970, and subsequently sampled, rapped, covered and otherwise re-recorded who-knows-how-many times since, “Oye Como Va” is an easy entry point. “Listen to how…” the name invites.

Spanglish Fly heads-up the present-day boogaloo revival, along with a small and specialized handful of others right from the old neighborhood, and another cadre of qualified couriers from out L.A. way… and one more faction, from right here in Western Mass who call themselves The Boogalistics.. Now, “listen to how…”

I heard one of these guys say they were still working on the name, but I say “Boogalistics” ain’t so bad. It’s always a good thing when a band’s name gives some indication of the genre they play. I think I caught a whiff of Herbie Hancock, and yes- he was there in the city in the sixties when all them kids were melding styles in their melting-pot.

As soon as they started into “Sweet Emma” by the Adderly (not Everly) Brothers, the groove settled in… nice… smooth. A swooning groove indeed, and all here were taken in and taken away. This was just the right time to fire up the moving picture device. The trumpet is a great addition in the guest’s hands, and it’s always an electrified pleasure to see and hear the support from the audience- and to FEEL it.

Always an appreciative and enthusiastic crowd at Bishop’s Lounge, and no less so with the particular clientele -as in, the diverse population- that comes with the turf here in Northampton, and the predominant… hmm, age group, shall we say? The house is rocking a mostly under-30 crowd tonight (and most times at Bishop’s) – hell man, they don’t even get going till after ten – but this is not at all to the exclusion of any others. This is always noticeable with this crowd, much like the jam scene: they are open and welcoming, and even accepting without the attitude that was almost always part of the deal way back when.

Bishop’s Lounge is not a large place; but they play whatever bands they know are a good fit. There are ten members of this ensemble on this night, though the band often is as many as twelve. And, just like the Bûgalu bands back in the day (the 60’s), they are a widely diverse, multi-ethnic group- which was a pretty new and novel thing then, especially for that to be more the norm than a rarity across the entire genre.

This is beach music, of a sort- the big ol’ fun-in-sun party kind, but beyond any “Beach Blanket Bingo” business. We can just hear it playing over the surf and communally compelling who-knows-how-many beach goers to translate their laughs and smiles into rapid and rhythmic movement. This is not the kind of sound that makes the upper-crust go all white-bread snooty and snort in derision while “they” have a good time. .This is the stuff of spiritual fellowship. That certainly is the vibe in here tonight, and I don’t know that these folks have anything more than love of good music to bind them together and cheerfully tether them all together with the band.

Whether they fully place themselves smack-dab in the middle of any dreaded “category,” Spanglish Fly is at the forefront of the current Bùgalu revival.

I hadn’t been to Bishop’s in a while, and this made for a great way to jump back in (there’s a lot of that goin’ on in here tonight- jumping I mean). In fact this is very, VERY much like a night with Amazing Love, a particular house family favorite. It’s that kind of vibe, that kind of energy, and very much that kind of show overall… just in a different language mostly.