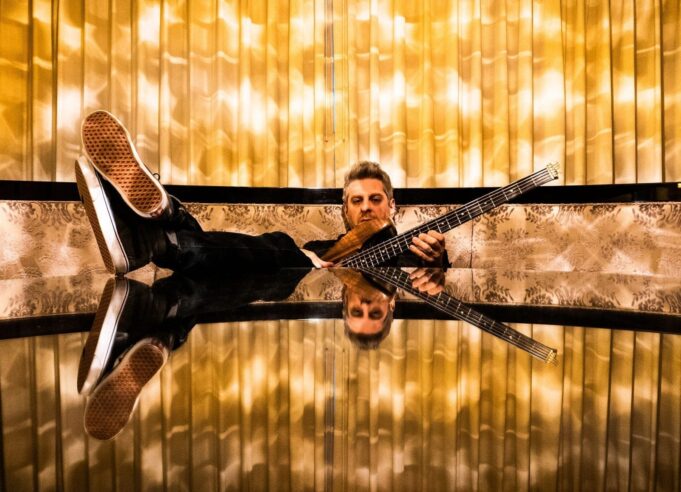 Performing Live at the Sinclair in Cambridge MA March 21 2019

Mike Gordon opened up a four night run last Thursday at the Sinclair in Cambridge MA to a sold out crowd, not only for that night but for the whole run. Is it possible that the crowd was both excited and calm- settling in for what they hoped would be an epic night and an epic run.

The band consists of John Morgan Kimock on drums, Craig Myers on percussions, Robert Walter on keys, Scott Murawski on guitar, and Mike Gordon on bass. The vocals are handled mostly by Murawski and Gordon with others chipping in on backing vocals. This gathering of musicians represents many corners of the live music world from Phish to Max Creek to Grey Boy to myriad other bands.

But do not go to a Mike Gordon show expecting Phish, or Max Creek, or anything else you may have heard before. Mike Gordon is well known as the left of center contributor to Phish- as the show’s opener I Am Random reflects. His creativity and unique musical perspective is on evidence throughout every song of the show.

Two sets unfolded and covered a lot of ground while staying within a certain context that can be defined as the Mike Gordon. From the very first note you knew you were in for a bass centric show, as the bass was higher in the mix than really most any band you will see. It is Mike Gordon after all. Each musician has figured out how to best support this bottom up mentality while also showcasing their own unique musical perspective.

At times the songs can be extremely melodic and incorporate rhythms that are familiar and expected. At other times the band veers into territory you might not expect- but that goes with the concept in that the unexpected is expected when it comes to Mike Gordon himself. Random led to two more originals in Equilibrium followed by Put Down the Phone. In a fit of appropriate irony my wife and show partner for the night had her phone up and recording during that song.

Up next was a song familiar to me, Robert Palmer’s Clues which I remember from very early MTv days, and has always been a song I dug. So a cover for sure, but one that many folks won’t remember- and a song that has become a regular part of the Mike Gordon rotation. The set continued with a mix or originals and the Led Zeppelin cover Dyer Maker given the unique spin of MGB. The set closed in just under an hour, and the audience settled in for a set break.

Set break was an opportunity to connect with friends and I caught up with some folks from all over- Creak Freaks, Phish fans, jamband community and more. The show was definitely at capacity but there was just enough room to move around. I was occasionally bothered by the constant stream of people throughout the show moving around and through my personal space, but such is life with a popular show. And that was partly due to where I chose to stand (with my back against the sound board area, so I could keep an eye on my audio recorder.)

Set two opened with Go Away and rolled from one song to the next the entire set. Of particular joy to me was Robert Walter who I have been hearing about regularly for decades now it seems, but I can’t recall any time I have seen him perform until this band. His Rhodes sounding solo on My Favorite Mistake was particularly beautiful. He adds the requisite funkiness but also has the chops to play likely anything. It’s no secret that I’m a huge Max Creek and Murawski fan, and it was great to see him doing something completely different than he does in Max Creek. He did take a moment or three to shred throughout the show, but it was not his focus.

This band is much more of an ensemble. At times the entire band takes on a rhythmic support role, allowing Gordon to explore on bass in ways that he might not be able to otherwise. The other four musicians almost act as a giant bass section, and allow Gordon to go melodic and explore. Having seen thousands of shows at this point, it is always nice to see experimentation with basic forms and concepts and the results that can come from the creativity and experience of a player like Mike Gordon.

Creek freaks looking for some satisfaction could take a moment of joy when Murawski busted out with the front half of the seminal Max Creek song Just a Rose which was put through the MGB washer and comes out somewhat different than the version you may be used to otherwise.

The set closed with You Strike My Main Nerve and a nice chat followed by Gordon recognizing friends and parents in the audience. He got a bit heart felt (different than his somewhat cheeky banter throughout the show) when talking about his parents, his father’s presence in the area and career building up a local store chain. He then explained how the final song of the set was a result of a memory of the store’s jingle he remembered well from being a kid. Sughn Never Sets closed the set.

The departure was brief as the band came back quickly for an encore in the form of a cover by Rancid, their own seminal song Ruby Soho. It was an interesting take on the song, parts being close to the original and other parts were exploratory making you wonder about whether either Phish or Rancid could be a reggae tinged jam band. This was a perfect capper and summary for Mike Gordon in general- what if we took what we know, and turn it on its side, examine it from different angles, try different experiments yet always keep things in perspective.

The run would continue to unfold over the weekend including a visit by Gordon’s Phish bandmate Trey Anastasio on Saturday night, but that was not yet known to this crowd as they departed into the cold night, sated at least for a minute.

Whole show audio above, use the arrows to toggle between the songs.

SET 1: I Am Random -> Equilibrium, Put Down The Phone, Looking for Clues, My Favorite Mistake, D’yer Mak’er > Crazy Sometimes