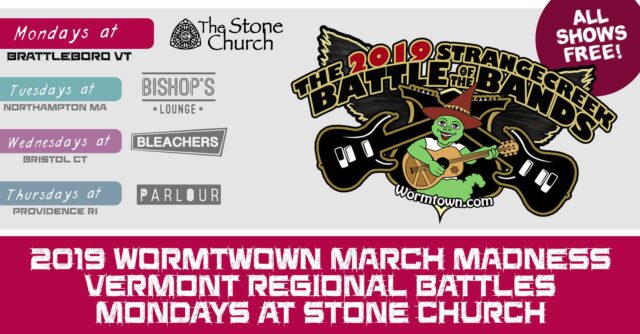 I have to admit, I’m pretty excited about the Strangecreek battle in Brattleboro, as the first week was super quality music from start to finish. So approaching week two, I had somewhat high expectations. Not only did the Dirty Vice band really set the bar, but all of the bands that night did as well. So the three bands for this week’s battle better bring it: Deep C Divers, Nikita, and Zillawatt have a battle brewing!

Deep C Divers hail from Massachuestts and include Paul Erlich on lead guitar, on this night they had Rob Rivera on bass, John Bordage on drums, and DeepC on voice and rhythm guitar. The band is tight and practiced with a clear vision of who they are. Elements of reggae,rock, and pop come together quite well.

Check out the review of week one of the battle which featured Whalom Park, The Dirty Vice Band, and Getmo and includes audio of all three bands.

At times, they brought bands to mind from the Police to Men At Work and World Party – all bands with a compositional focus and a melodic sensibility. Deep’s voice is rich and evocative and Erlich’s leads are inventine, and they both have the freedom to do so by playing over a super tight rhythm section who each shine individually in addition to holding the pocket and band together.

Nikita hails from the Hartford area. The band is a six piece with Clay Zotta on guitar, Chris Yeterian on drums and vocals, Jason Ott on bass, Billy Yeterian sings, Keenan Asbridge on keys and trumpet, and Kyle Marceau on percussion, guitar and vocals. Yeterian is a versatile singer, fully dedicated to his delivery.

I should mention that the Stone Church is doing a great job hosting the battles- it’s a great room, sounds amazing and they have excellent food and libations. It was especially great to hear such good sound coming out of Jason on the sound board, as it was his birthday and he was celebrating with all the Worms.

Nikita is textural and at times ethereal. The first song of the set gave me a bit of a Sade vibe, and as the set progressed, the band got a little heavier – not afraid to get into the bassy grooves followed by funky bridges. From Blue Oyster Colt to a disco vibe in just a matter of seconds was not a tough journey for Nikita.

We captured probably 30 minutes of the set, use the arrows to toggle between songs.  Sadly the batteries died before the end of their set.

Also hailing from Hartford CT is the band Zillawatt. A four piece band features Blake Ford on on guitar, Connor Oyster on bass and vocals, Nate Lawson on drums, and Matt Kamp on keys, vocals, saxophone, and EWI (Electric Wind Instrument). Kamp later explained to me that he is the newest member of the band, but he has jumped in with both feet contributing mightily to the band’s sound.

Like Nikita before them, the jazz funk vibe is strong in Zillawatt. Connor on bass tends to lean on the thumb-driven slappier side of things, and the combination with the presence on keys and woodwinds of his bandmate, it provides a vibe that is both bold and smooth at the same time. I’m reminded of the Brecker Brothers and Weather Report, and the Hancock influence is strong. The funk is a bit more up front with Zillawatt, and theirs was perhaps the most danceable set of the evening.

All three bands on this night were extremely strong compositionally, and much like week #1 featured an all originals program for the whole night. Think about that, over the course of two weeks and six bands, not a cover in sight that I could ascertain.

But like with week one, we are there to do a job, to pick who will advance to the regional finals in two weeks in the Strangecreek Battle of the Bands. Like with week #1, it was a tough choice. But in the end after I consulted with some other elder Worms, the choice was unanimous. Zillawatt took the crown that night and will return, and all three bands were great performers. Any of them would be at home at Strangecreek. 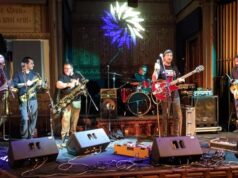