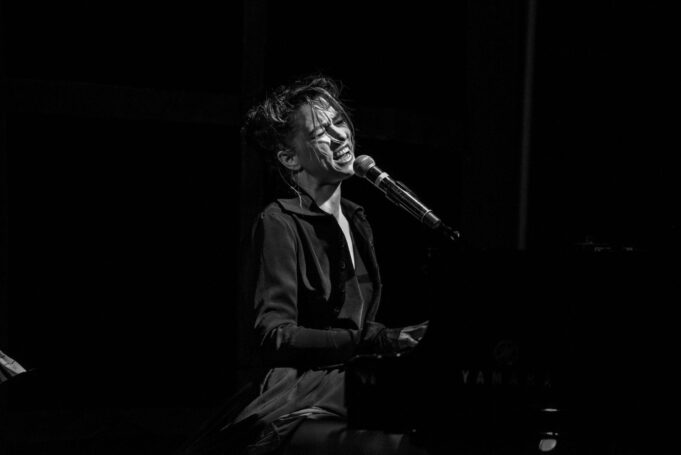 Amanda Palmer, sometimes known as Amanda Fucking Palmer is a singer, songwriter, musician, author, and performance artist. All of this was on full display last night at Joe’s Pub in New York City.  This was one of a handful of “warm up” shows for her upcoming solo tour.  It’s just Amanda singing, telling stories, playing her Yamaha Grand Piano or playing ukulele.  Palmer had the crowd eating out of the palms of her hands.  They were on the edge of their seats, waiting for what Palmer was going to say or perform next.

This being a warm up show, it seemed more impromptu than say a regular show on the tour.  As Palmer said during the show, “It’s basically a three-hour TED talk with accompanying piano songs that requires an entire box of tissues to get through.”  It’s also a very, very funny show.  Palmer told a story nearly after every song.  Palmer talks and sings about abortion, miscarriages, cancer and grief among other personal details of her life during the set.  She writes depressing, dark, sad songs, yet the set was uplifting.  That’s the kind of performer Palmer is.  Being the performance artist, she had the audience entranced.

Palmer is supporting her first solo album in more than six years, THERE WILL BE NO INTERMISSION.  It’s available now for presale and will be officially released on March 8th.  Along with the album, Palmer is also independently releasing an art book of narrative photography to coincide with the album.  The album and book were independently funded by Amanda’s Patrons at Patreon, where patrons, get access to advance singles, tickets and other Amanda Palmer goodies.

Part Of Your World

Drowning In The Sound