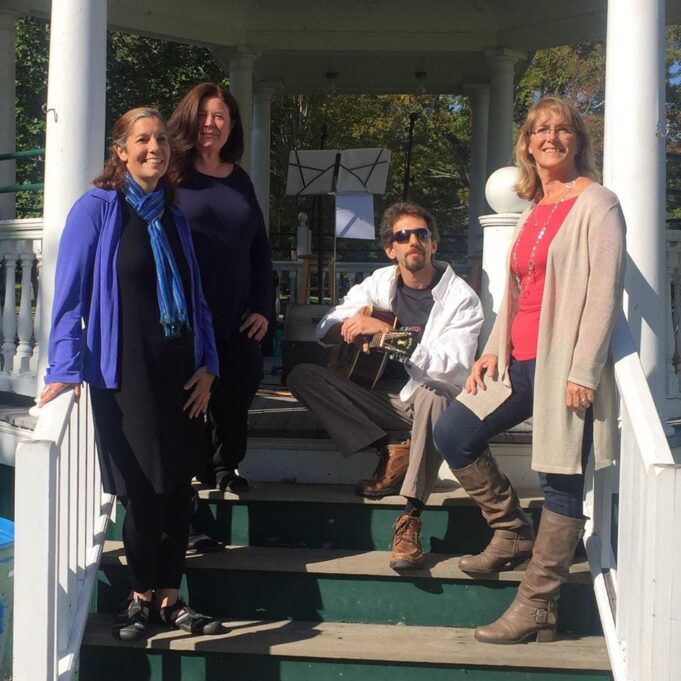 The higher on the scale of classiness something is, the less frame of reference I have.  This is a statement of fact here with no shame and no false humility.   Elegant and refined music and other things are not entirely lost on me but is apt to take a bit of mindfulness on my part, or slowing down and paying attention in the moment.  There are occasional exceptions.

Enter After the Rain.  Six years a vocal trio, they are at times an a capella endeavor and at times an acoustic quartet.  Most times, it seems, they are both.  The three ladies would, for a time, ask husband Devin Griffiths to come along or come in, and come up to play guitar with them.  Somewhere along the way they decided they were really a four-piece.  Devin does get ditched every now and again, though, just for a song or two.

This is exquisite music.  It really is quite beautiful- the kind of sound and experience a small-town boy from a former factory town might live all his days and decades with nary a stroke of fortune to guide his otherwise errant wayfaring.  One can only exercise a little more mindfulness and feel fortunate for the moment, right here and right now.

A certain humble scribe, upon encountering beautiful and classy music, will likely have little to provide context for the experience at hand.  Should I hold back in trepidation, fearing to besmirch an otherwise positive and favorable impression and report?  Or shall I speak in earnest from such a vantage point as is the only one available.

In other words, the music of After the Rain carries and conveys so much class that it rubs off.. on me, I mean.  Their sound makes me wax verbose and grandiose.  All I have for previous exposure to this kind of stuff is a couple of groups- two, that’s all.  Unless maybe you count the first half of Four Way Street.  Which is fitting, actually, as this folk quartet performs some of that very CSN material themselves.

The Roches and Eavesdrop come to mind right away.  Both are vocal trios with one acoustic guitar and the occasional percussive embellishments, and all are easy on the ears.  In the case of the former, for the folk-sisters who emerged from the shredded heart of the original NYC punk scene, quirkiness comes with the package. While their quirks lessen with time and maturity; some of their earlier material was unsettling to a few.  Eavesdrop, that Western Mass trio of angel-voiced lovelies who, were often and subject to the attentions of a certain humble scribe, continue to delight music-goers around increasingly large, spreading sections of the northeast region.

Folk music is a tradition.  From Woody and Arlo thru Pete Seeger and Peter Paul and Mary to this trio of trio’s we’re talking about right here and right now, practitioners of the art-form honor their predecessors and add their own touches.  Without such a foundation of respect and a sense of the appropriate, how’s an artist even gonna know where they’re coming from- literally?  One needn’t always follow the rules, neccessarily; but ya gotta learn ’em first so as to know when you’re within or without the boundaries.  Some, like the Roches, splash the water while swimming around in it; and some carry it forward while adding their own flourish.

So that’s what we have here in After the Fire.  Besides posessing a great name for a band, especially one in the acoustic folk tradition, we get to hear beautiful music in the vocal tradition from them.  These ladies fit together- with or without the guitar.

I will always prefer music with, guitar.  In this case the six- and twelve- stringed acoustic implements are of particular interest, as they are wielded by the normally Les Paul -loaded Devin Griffiths.  Devin, known by many as Wildcat O’Halloran’s second axe-man is such a very fine and tasty player that he not only keeps my interest, but he also makes for the perfect, classy accompaniment to these ladies’ fine music.  Never mind that he is married to the ‘central figure’ in the band; their first intention was to keep it an a capella endeavor and his playing went from trial to essential before they’d even played their first gig.

To take a really fine blues-man out of the element that is most familiar to the listener as well as the artiste, and place him in such a dramatically different setting… this is what a fine crossover.

The result at Bread Euforia that night? A tasty treat by After the Rain.

About the band: After The Rain performs a blend of acoustic and three-part harmony arrangements of a wide variety of music, from traditional Appalachian to classic rock to contemporary folk. They gravitate toward songs with rich harmony like Indigo Girls, The Wailin’ Jennys, and The Staves, and songs that lend themselves to new harmonic arrangements. Featuring Ruth Critcher, Rae Griffiths, and Carol Sharick on vocals, and Devin Griffiths on guitar, their members hail from Leeds, Amherst, and Belchertown, Massachusetts, and perform throughout the Pioneer Valley region.