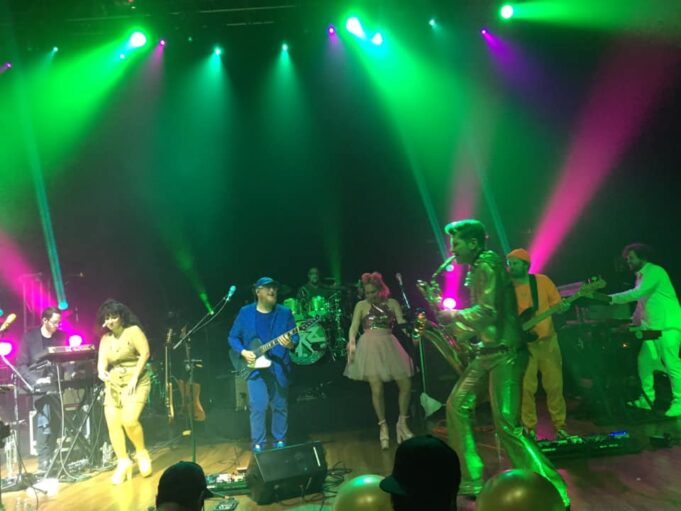 Surfing the unaccustomed wave of bachelorhood, I slid into the familiar saturnalia of New Years Eve a bit constrained. It was my first New Years alone and I was a bit weary. Luckily for me I had home field advantage and a band that could start a flash fire in the Mariana Trench.

The Worcester Palladium, to me, was where my music experiences started as a youth. And Turkuaz was just the band to get me out of the “oh-woah-is me” feeling of being single on New Years with no friends to celebrate. I quickly shook that feeling aside when I realized I had all the friends in the world under one roof on that special night. I was truly home.

Paris Monster kicked off the festivities and New York City subway buskers, Too Many Zooz, hyped the crowd for what ultimately was a fire-fueled, high-octane Turkuaz set.

I began the night viewing sound check and meeting the band thanks to my V. I. P. ticket. It was a nice intimate setting with chance to briefly engage with the entire 9-piece band at once. Something, as you can believe, is exceptionally hard to do. From there I got into party-mode. I went and had a few drinks at a lesser known dive bar called Moynagh’s Tavern, an old joint I used to frequent in my younger days. As luck would have it, nothing had changed. The same regulars who were drinking there the last time were still there, albeit a bit dusty. I sucked down my drinks and took the 2 minute walk straight to Palladium.

By the time Turkuaz took the stage my energy level was soaring. They could have opened with the old Irish ballad Danny Boy and I would have raged to the fullest.

They didn’t open with Danny Boy, thankfully, and boy did they ever come out swinging! A ramped up Coast to Coast set the bar for the night. As midnight approached the band broke out a surprising cover leaving half the audience stunned while the other half unapologetically belted out the lyrics word for word. Oasis’ Champagne Supernova was just the boost we needed to get us over the midnight hump. That followed with the traditional Auld Lang Syne. Kisses and champagne were being tossed around like your weird neighbor’s key party. Then it was back to business.

If I Ever Fall Asleep blasted us into 2019 with a full head of steam. Intermingling older jams with tracks off of their latest album Life in the City, the band really didn’t hold anything back. And then they hit us with a Queen Medley, which, to be honest, made the audience erupt with such powerful jubilation that the Palladium almost buckled under the intense plaudits. They ended their set with Monkey Fingers and then came out and ripped two encores, Back to Normal and crowd-favorite Bubba Slide.

And in the blink of an eye and a shake of the hips 2018 was over. A new year in its place. One that is destined to bring the all-mighty Turkuaz to an even larger stage. And one that is sure to be packed with so much music that our hearts will melt. See you guys down the line. Health, love, and happiness to you all in the coming year.

Encore:
Back to Normal
Bubba Slide