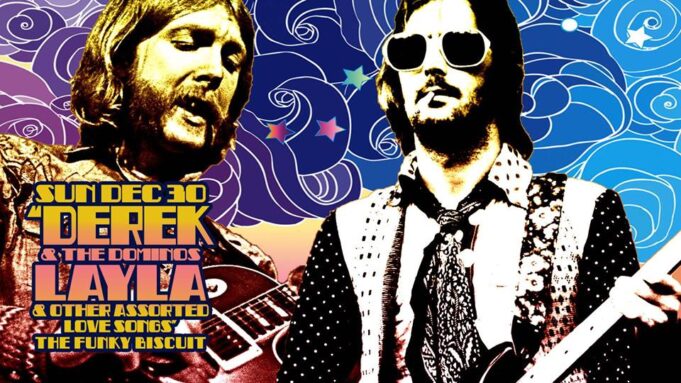 From Brooklyn, New York to Boca Raton, Florida the incomparable Scott Sharrard never disappoints.  You may know Scott from his prior role as lead guitarist and bandleader/musical director for the late Gregg Allman. He’s that and so much more… yes, he directs, sings, writes, produces and arranges music.  He has and continues to grace the stage with extremely talented musicians.

I was fortunate enough to be in attendance on night two of the three-night run, sharing the evening with some very special people.  Night two featured the music of Derek & The Dominos album- “Layla And Other Assorted Love Songs” performed by Scott Sharrard and an amazing line-up of exceptional musicians most of whom have graced the stage with the Allman Brothers Band, the Gregg Allman Band, Butch Trucks and/or other offshoot bands related to this musical family.  Scott Sharrard (guitar, vocals) was joined by Tash Neal of The London Souls (guitar, vocals), Marc Quiñones – 26-year percussion veteran of the Allman Brothers Band and Gregg Allman Band who is currently touring with the Doobie Brothers (drums), Peter Levin (keyboards, Hammond B-3), Brett Bass (bass), and Bobby Allende (percussion) all formerly of the Greg Allman Band.  Also joining them on stage for several songs were Richie Schmidt (guitar, vocals) and Anna Ayers (vocals). The band was fantastic and played to a sold-out crowd of elated music aficionados. Suh a wonderful night of feel-good music with these super-talented musicians.

The band covered each track front to back of the Layla and Assorted Love songs double album originally released in 1970. This masterpiece album was produced by the one and only Tom Dowd and recorded right here in South Florida at Criteria Studios in Miami just less than 70 miles South of the Funky Biscuit lending to the historical significance of this highly acclaimed album being celebrated on this magical evening.  Making the evening extra special was that my friend Dana Dowd, (Tom’s daughter and keeper of his legacy), was in attendance.  Scott took a moment to personally and publicly thank Dana and said it meant a lot to him that she was present.

The band’s energy was contagious as they played every single track on the album to a very lively crowd. The synergy on stage was amazing as each member’s musical abilities shone through as they paid homage to the music that shaped their lives. It was incredible how it all came together with these musicians jamming and jelling leaving the crowd wanting more.

Whatever you do, wherever you are…get out and support LIVE music.

A huge thank you to Rock Legends photographer Jay Skolnick of J Skolnick Photography for not only capturing the emotion and the many special moments that evening but for graciously sharing these photos.    You may view the gallery of photos from this fantastic night here

If you have the opportunity to see …Scott Sharrard, I highly encourage you to do so; you’ll be so glad you did. Access his tour dates here. Follow him on Facebook and purchase his music.

Also, don’t miss the Melody Trucks Bandplaying at a venue near you… follow them on Facebook and stay tuned as they are currently in the studio recording and will be releasing their upcoming CD in 2019.

Finally, you can follow Peter Levin and his music here.

Special thanks to The Funky Biscuit.  For upcoming shows, follow them on Facebook or check out their website.  Nothing better than great food accompanied by great music!!