For years, the summer months were the time for staple bluegrass festivals like Telluride, GreyFox, DelFest, and others. Yet in recent years, the cold season has seen its own nationally popular string band event, in the annual, three-day music festival known as WinterWonderGrass, or WWG for short.

Starting as a dream project of musical artist Scotty Stoughton, WWG began in Tahoe, California and eventually expanded to include a weekend at Steamboat Springs, Colorado. Stoughton and his WWG team worked closely with some of the best artist names on the scene to create a highly anticipated yearly event–one that is now gearing up for its first ever northeast appearance.

This weekend, from Friday December 14 to Sunday, December 16, WinterWonderGrass will host its first ever event at Stratton Mountain Resort in Manchester, Vermont.

Headlining Stratton’s debut festival event will be nearby northeast natives Railroad Earth, along with other improvisationally talented groups like The Infamous Stringdusters, Billy Strings, Kitchen Dwellers, and Jon Stickley Trio. The lineup also includes indie grass acts like Fruition and The Ghost of Paul Revere, collaboration groups like Keller and The Keels and Jeff Austin Band, and much more.

There will be three artists at large on Stratton, and interestingly enough all three are musicians of recently defunct string bands: Fiddle player Bridget Law and multi-instrumentalist Charlie Rose, both former members of the currently on hiatus americana act Elephant Revival, will be roving around the mountain, along with the enigmatic Pappy Biondo, former frontman of the recently split up jamgrass group Cabinet.

Besides its appealing lineup, there’s a lot more surrounding the music that has helped WWG sell out every single year since their first event, including tons of food and restaurant offerings, beer tastings, snow sporting options, and VIP experiences. On their website, The WWG team describes themselves as “a collection of community-minded artists, brewers, snow riders and environmentalists focused on creating a pallet where all can explore, connect, and thrive.”

Tickets for all three upcoming WinterWonderGrass events, including Stratton, are on sale now, and to purchase yours or find out more information, head to https://winterwondergrass.com. 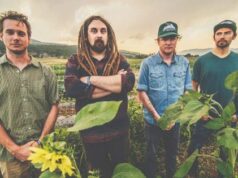