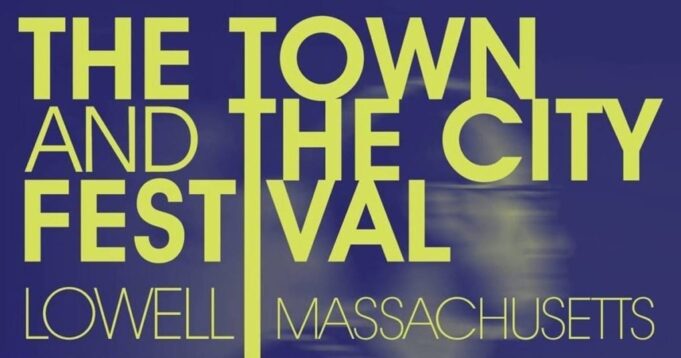 The Town and The City Festival

https://www.youtube.com/watch?v=fHLDz6RTCKk&feature=youtu.be   Following the poetry performances (this is the review of the poetry portion of the festival which includes interviews with Scarlet Sabet and Janaka Stucky), I made my way over to Zorba’s Olympia Hall to see Gary Hoey’s show.  When I was walking up to the entrance, I saw Gary outside with his bassist and drummer, and headed over to re-introduce myself.  He seemed happily surprised and shocked when recognition dawned on who I was, since we hadn’t seen each other in thirteen years, when he judged Guitarmageddon at Guitar Center in Natick, MA in 2005.  He was very happy that I was there to cover his show, and as it was close to showtime, we hugged and made our way inside. 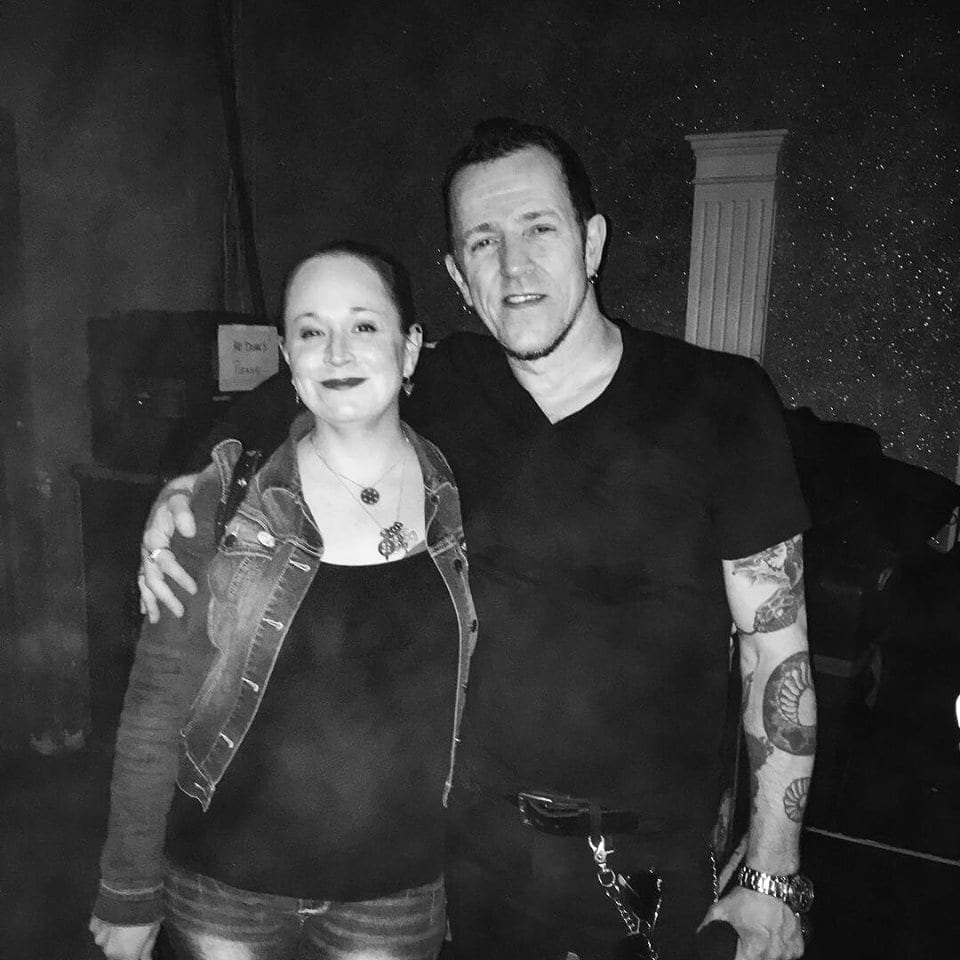 Gary has quite a few professional notches in his belt, playing with such guitar greats as Jeff Beck, Brian May, Ted Nugent, Joe Satriani, Steve Vai, Peter Frampton, and Dick Dale.  He has also, as Music Director of the Rock and Roll Fantasy Camp, worked with legends like Joe Perry, Roger Daltrey, Yes, blues icon Johnny Winter, and KISS drummer, Peter Criss.  He has explored many styles in his career, including hard rock, surf rock and progressive rock, but with 2013’s “Deja Blues” he came back to the blues. His latest, 2016’s “Dust & Bones,” is an fantastic fusion of blues and rock. Whatever style he plays, one thing is certain, Gary is a fiery, charismatic player who connects with the crowd. The Gary Hoey Trio is comprised of himself of lead vocals and guitar, AJ Pappas on bass, and Matt Skurfield on drums. When I got inside, I got myself set up at a table right up front, and they started shortly thereafter, opening with the B.B. King classic, ‘The Thrill is Gone.’   Gary Hoey – The Thrill Is Gone – 2016 Dallas International Guitar Show https://www.youtube.com/watch?v=qy82u1vVNVk&feature=youtu.be   It was a phenomenal set, the trio playing original material spanning Gary’s nineteen albums, including ‘Soul Surfer,’ ‘Deja Blues,’ ‘Dust and Bones,’ and ‘Steamroller,’ a song off his new album written for Johnny Winter.  They also included covers like ‘Born Under a Bad Sign,’ originally recorded by Albert King and subsequently done by the likes of Cream and Jimi Hendrix.  They closed out the show with a nod to Hendrix, playing the National Anthem then going into the classic ‘Foxy Lady.’   Gary Hoey – National Anthem/Foxy Lady – 6/30/15 – Rams Head – Annapolis, MD   https://www.youtube.com/watch?v=_WtCx0v6p_k&feature=youtu.be The crowd was energized throughout the whole show, many getting up to dance and sing along.  It was definitely easy to see why Gary is ranked one of the top 100 guitarists of all time.  A consummate player and performer, he knows how to work the crowd, but at the root of it all, is a genuinely nice guy who cares deeply for his fans.  After the show, we caught up briefly to take a quick picture together before I headed home to prepare for day two of The Town and The City Festival. Gary will be kicking of his Ho Ho Hoey Rockin’ Holiday tour in Sellersville, PA on November 23.  Check out http://www.garyhoey.com/tour for dates and ticket information!

I had decided for the second evening of the festival to attend Jireh Calo’s performance at Coffee and Cotton, and then head over to Uncharted Gallery to see Analog Heart.  This time I brought with me my friend Nick, a fellow musician, to enjoy the shows with me. We got to Coffee and Cotton a song or two into Jireh’s set, due to traffic going up I-93 from Medford to Lowell.  We sat down as she began to play Herbie Hancock’s ‘Butterfly,’ and I could tell we were in for a great performance. 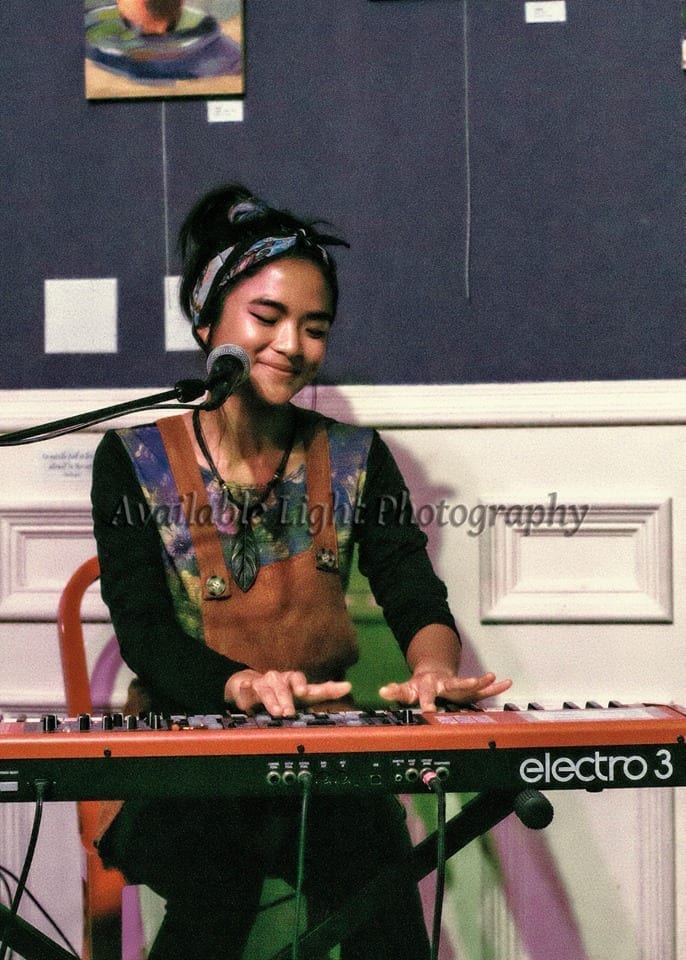 A truly gifted pianist, composer, and arranger, with a powerful voice that belies her slight frame, her music is heavily influenced by traditional jazz, Latin Afro/Cuban rhythms, classical music, and a variety of world cultures.  Born and raised in the Philippines, she made her debut at the age of 17 in the Manila music scene as a singer-keyboardist, at the Boy Katindig Jazz Competition.  At 18, she formed her own Jazz Fusion band, The Jireh Calo Project, and represented the Philippines at the 2014 World Youth Jazz Festival in Malaysia.  Within the same month, she released her self-titled debut EP, ‘Jireh,’ produced by Paolo Garcia.  In the Spring of 2015, she left the Philippines to pursue her bachelors in Contemporary Writing and Production at Berklee in Boston.  She completed her degree in 2017, graduating Summa Cum Laude.  During her last year, she produced and released her second EP, ‘Solid Ground.’ In addition to performing and making music, she is also passionate about educating and uplifting people in different communities.  She remains active today as an artist-educator, working closely with the youth, teaching music and being deeply involved with her community.  In fact, as I write this, she has just returned from the Dominican Republic Jazz Festival where she performed as well as taught and provided community outreach.  Currently, she is also pursuing her graduate degree in Contemporary Performance (Global Jazz Concentration) at Berklee Global Jazz Institute in Boston. Getting back to her performance at Coffee and Cotton:  she was joined on stage by her good friend, 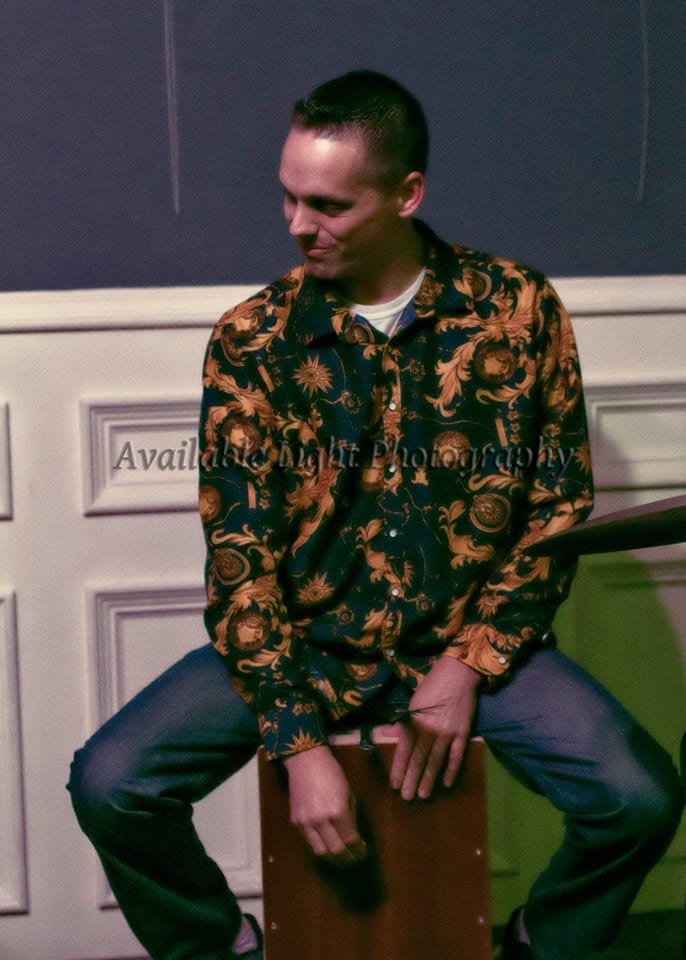 Kevin Michael Martin, who accompanied her on the cajon (a box shaped percussion instrument).  Her set consisted mainly of her own compositions, interspersed with a few jazz standards, like ‘My Favorite Things,’ which she had people join in by saying what some of their favorite things were, and she comped verses on the spot surrounding the items. She performed one of her original pieces, entitled ‘Sonder,’ from her second EP ‘Solid Ground.’ It was written while traveling from Boston to Lowell on the Commuter Rail, and was based around the definition of the term sonder – the profound feeling of realizing that everyone, including strangers passed on the street, has a life as complex as one’s own, which they are constantly living, despite one’s own personal lack of awareness of it. Another great crowd participation piece she did was a Northern Philippine Tribe song of gratitude called ‘Sali Du May.’  She taught the audience the chant, and then came out from behind the keyboard to sing acapella, while the audience sang the main chant, to sing another chant over it.  What a gorgeous piece. During the set, she seemed almost lost in a trance as she was playing a gorgeous funk jazz piece, complete with scatting.  At the end of it, she said, “You have just witnessed how I write songs.  You know, sometimes I’m like, I just gotta jam!”  How amazing is that?  Just right in the middle of the set, she comes out with this crazy cool piece that she composed right on the spot!  She finished up with another original song entitled ‘Flame,’ a great 6/8 time signature song, that really gets you swaying in your seat. I was able to get some of her performance via a Facebook live video, you can watch it at the link below. Jireh Calo at Coffee and Cotton https://www.facebook.com/lakesidemaiden/videos/10156168276154139/?t=2   Jireh is a masterful artist, and you should definitely get out to see her if you have the opportunity.  Her music is available across all music streaming and purchasing platforms as well!  Check her out on Instagram, Facebook or at her website, jirehcalomusic.com After Jireh’s show, we headed out to find something for dinner, and then headed over to Uncharted Gallery to await Analog Hearts show, which was set to start at 10:30.  When we got inside, it was completely packed, standing room only.  We found a spot over in the corner by the front of the house, and I made sure I would be able to get some good shots from where we were standing. 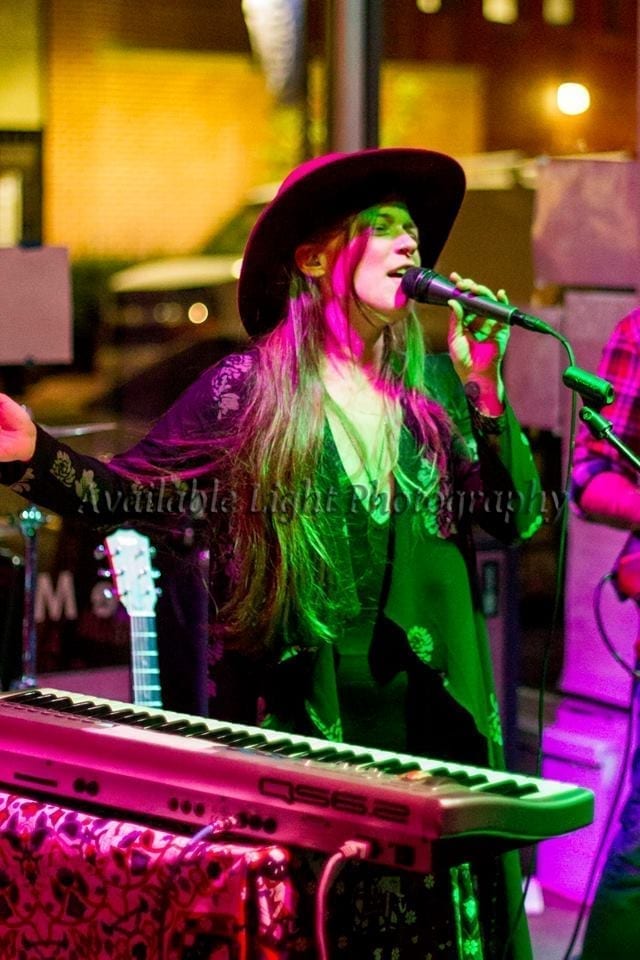 Analog Heart features a core lineup of Liz Bills on lead vocals, Jesse Cohen on guitar, Austin Magnant on bass, and Eric Simpson on drums.  A genre-colliding, powerhouse rock and roll band, they have become a fixture in the New England music scene, playing at many well known venues, like the Middle East, Cafe 939 and The Bull Run, and have also embarked on several northeastern tours.  They have shared the stage with many well known acts such as Gary Hoey, Kellie Pickler, Danielle Bradbery and many others. When Liz opened the set with an acapella performance of Janis Joplin’s ‘Mercedes Benz,’ I knew right then and there why the place was packed.  Liz is an exceptional vocalist, and she gave such a powerful, dead on rendition, it gave me goosebumps; it was like listening to Janis herself.  I have to be honest, once I started listening to them perform, I was so lost in the music, that all thoughts of keeping track of what they were playing went out of my head, and my music photographer persona took over.  They were just phenomenal.  Thankfully, at the end of the show, I was able to get a shot of the setlist so I’m able to give a bit of a recounting that way. The bulk of their set were solid original songs, including ‘Not Good Enough,’ a great groove rock song with awesome harmonies. ‘Lyin,’ had a slight modern rock-country feel, with a classic rock undertone. 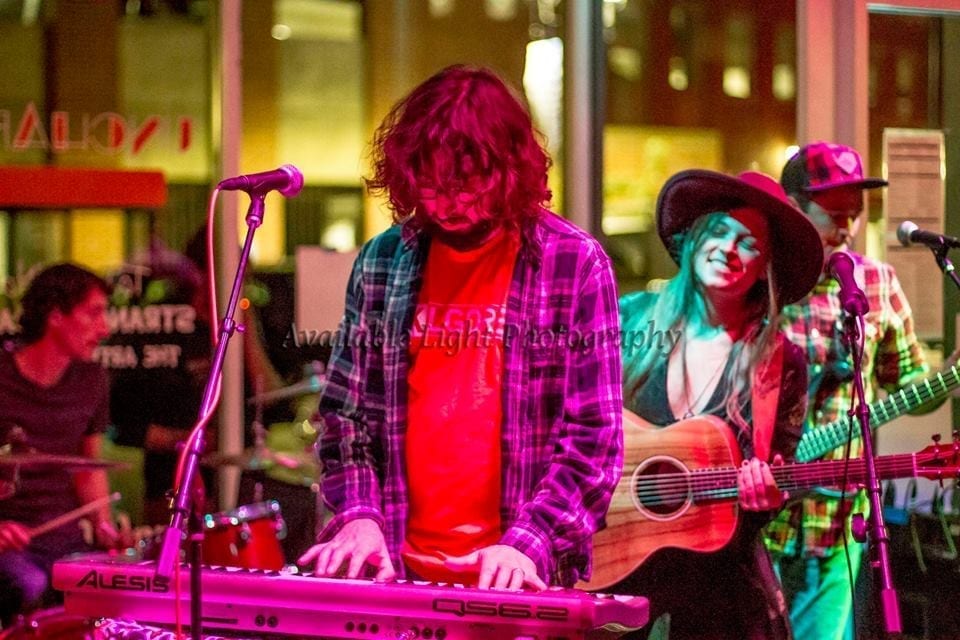 One of the songs that really got the crowd going was ‘She’s Rock n Roll,’ and Liz moved out into the front of the crowd, dancing along with some of the fans as she sang.  They did a great cover of the classic blues song, ‘I Put a Spell on You,’ done by the jazz great Nina Simone, and also more modern artists like Creedence Clearwater Revival and Annie Lenox. Exceptionally talented group of musicians, along with great stage presence made for a really great show.  I’ve included a Facebook live video I took of some of their performance that night below. Analog Heart at Uncharted Gallery https://www.facebook.com/lakesidemaiden/videos/10156168496069139/?t=1 They currently have one show coming up on December 1, 2018 at Askew Prov, in Providence, RI.  Check out Analog Heart on any of your favorite music streaming applications, on Facebook, Instagram or at AnalogHeartBand.com. The first year of The Town and The City Festival was a resounding success!  What great artists and performers they had for both days, here’s to next years festival!  Can’t wait to see what Chris Porter puts together!