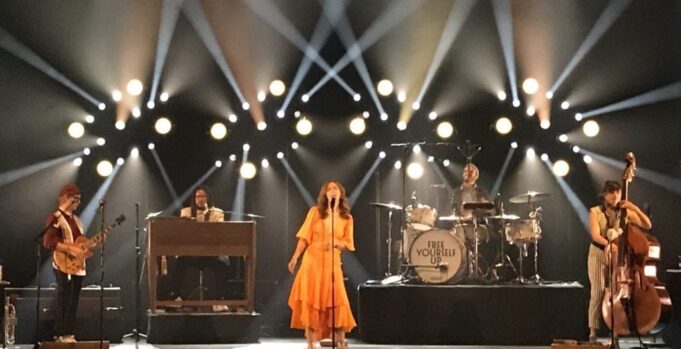 Venturing out in the first snowstorm of the season to see Lake Street Dive at Northampton’s gorgeous Academy of Music might seem a bit extreme, but God, I love this band!

When I started seeing Lake Street Dive (LSD) circa 2009/2010 at the Rendezvous (the“Voo”), in Turner’s Falls, MA, there were maybe 25 people in the tiny club. Lucky for the band, Jim Olson, owner of Northampton’s Signature Sounds label, was also in the crowd for one of those Voo shows. He liked them so much, that he signed the band, giving them their big break and introducing the band to a wider audience. They’ve since gone on to sign with Nonesuch records and have put out two powerhouse platters that have received major radio play and solidified their reputation as one of the most fun bands on the music scene.

Whether Lake Street Dive is headlining festivals like GreenRiver Festival, crushing it on Conan and Colbert, or playing to sold out houses on their Free Yourself Up tour—including the November 15th Academy of Music outing—this band puts on one hell of a show. Seeing a Lake Street Dive gig is an age-defying experience with people in their 20’s dancing right along with folks in their 60’s and 70’s. And hell yes, EVERYONE is dancing. True, the Academy of Music tries to keep a lid on the whole dancing in your seats thing but the aisles are fair game.

LSD’s success and their multi-generational reach can be attributed to accessible songwriting, outstanding musicianship, and their genre-crushing style. The band met during their time at the New England Conservatory of Music and each member of Lake Street Dive is an accomplished musician and several are multi-instrumentalists. Front woman Rachel Price has been performing live (singing gospel, jazz, R&B, and pop) since she was nine-years-old and her finely tuned presence on stage is a driving force in LSD’s performances. Her style-smashing vocals bring the songs to life and make you smile at each happy moment, laugh at every absurdity, and cry each tear right along with her.

The rhythm section of Mike Calabrese—drums and vocals, and Bridget Kearney—upright bass and vocals is the engine that propels each song fromstandard to sublime. Kearney’s (check out her 2017 solo album, Won’t Let You Down) frenetic bass playing evokes jazz masters like Mingus and Carter. Calabrese shines, both as he bangs out the beat and as he harmonizes with Price, Kearney, Bermiss, and McDuck. Mike “McDuck” Olson is both a tremendous guitarist and an accomplished horn player whose jazz influences punctuate tunes like “Better Than” and “Still the One.” Newest member Akie Bermiss joins the band on keysand vocals. About halfway through the set, Akie treated the crowd to a cover of Shania Twain’s hit “You’re Still the One” and owned it with vocals reminiscent of The Gap Band’s Charlie Wilson..

Lake Street Dive seems to improve with each outing. Their Academy of Music set was a tour de force through their latest album, Free Yourself Up and many favorites from past albums. When LSD took the stage to a dazzling light show and launched into the funky set opener, “You Are Free” from their latest EP, the crowd was instantly enthralled. This was one of several new tunes from the album—along with “Hang On,” current hit “Shame, Shame, Shame,” “Good Kisser,” and several others that blended seamlessly with favorites like “You Go Down Smooth,” the “Bobby Tanqueray” trilogy, “Call Off Your Dogs,” and “Bad Self Portraits.” The band joyously powered through each of these tunes as they kept the intensity high throughout the night.

Lake Street Dive largely sticks to songwriting themes of love—lost and found, heartbreak, jealousy, the absurdity of allowing someone to shape how you feel about yourself, and the rebirth of your spirit. The tracks on this new album largely stay true to their bread and butter. However, the band swerves into politics with “Shame, Shame, Shame,” written as a treatise on injustice in the current political climate, and “I Can Change” which they perform as a beautiful, stripped down acoustic piece. “Change” is a song Rachel has described as looking at the world around her and being filled with feelings of anger and frustration and then examining those thoughts and feelings, to make positive change.

Price, always shaking her hips, shared anecdotes abouts everal of the tunes throughout the 20ish song show, and the band kept things lively with on-stage banter and interactions with the crowd. As their main set wrapped up, Price, Kearney, Bermiss, and McDuck ducked backstage while Calabrese remained at his kit for a sevenish minute drum solo to the crowd’s delight. The band then rejoined him to crank through a soft encore that included fan favorite, “Bad Self Portraits” and new hit “Good Kisser,” one of the best songs the band has ever done. The real encore was a fun romp through new tune, “Dude” and the Jackson 5 classic, “I Want You Back” which is part of LSD’s extensive arsenal of 70’s and 80’s covers.

This is a happy-making,fun band to watch. They seem to genuinely enjoy each other’s company—on stage and off. This vibe comes through in their live shows and it’s a big part of the band’s success. Throughout their set, I caught the band mates giving each other sly smiles, as if to say,  “Can you f’in believe this?!”

While Lake Street Dive’s success may feel like it has come almost overnight, this has been a hard working band for the past 14 years, playing hundreds of gigs each year. They’re still winding up the U.S. leg of their Free Yourself Up tour with a few more shows in the Northeast and Southeast, then they head off on the European leg of the tour.  Whether you’re a long-time fan or you’re new to the band, be sure to catch them live!