Just a few shows into its annual Fall Tour of the northeast, Dark Star Orchestra is already firing on all cylinders as the esteemed Grateful Dead tribute act not only had the chance to play a show with one of Jerry Garcia’s legendary guitars, but also celebrated a band milestone. “It’s been going good. We just celebrated the bands 21st anniversary the other day (11/11), so we’re finally old enough to drink,” drummer Dino English said during a recent phone interview. “We’re about a week in to (the tour) now and the music’s going good, and it’s selling out pretty well.” Two days prior to their anniversary, the band had another memorable show when, in Lowell, Massachusetts, lead guitarist Jeff Mattson was given the opportunity to perform  with Garcia’s iconic guitar, Wolf, for both sets. While it wasn’t the first time the band had the privilege of incorporating the guitar’s tone into their sound for a show, it certainly lead to a memorable performance in Lowell. “The first set we played more 1973 style songs, although we had two drummers so we had to adapt more to the arrangements of those songs,” English explained. “The second set was more of a 1978 style set, which were both years that Wolf was played. This was actually the second time Jeff played it. The owner is in the Boston area, so he lets us give it a run, and it’s always an honor.”

To say the band is enjoying themselves on this outing sounds like an understatement. They’ve already recreated shows from 1974, 1979, 1980 and have explored multiple elective set lists where the band chooses to jam on Dead and Garcia material – sometimes from a specific time frame – instead of doing a show recreation. No matter the style of show, DSO has been taking the music farther with every performance, which is something English said helps to explore different realms and develop as a band. “It’s a huge commitment in the band to dig deeper and explore a deeper space within the music,” he said. “We’re always trying to go to a different place we haven’t been before within the music. It’s a continuous work in progress and it’s a goal for us – to explore new places and keep the music fresh. I think that’s one of our major goals that we’re continuously trying to get to. It’s definitely a privilege to play this kind of music because it’s so open-ended that you can grow with it, and I think we have. I think the band sounds different than it did 5 or 10 years ago. I think musically we’re in a better place, so it’s all about that personal growth as well.” The bands growth will continue for the rest of the Fall run which includes numerous dates throughout the northeast, and will feature some perennial stops like the traditional Thanksgiving Eve show at Penn’s Peak in Jim Thorpe, Pa. DSO played its first Turkey Day Eve show at the log cabin style venue in 2005 and since then, the annual romp has grown into a guarantee sell out with people traveling from surrounding states to join in the party. The venue’s atmosphere and the vibe of the crowd are only some of the reasons DSO will always be smiling when they arrive on show day. “We love the Peak,” English said. “What can you say? It’s a special place, and one of our favorite venues to play. It’s a beautiful venue with a great vibe, and I just can’t say enough good things about it. I enjoy going there in the Spring time as well. It’s always a good time, because everyone seems to show up whenever we’re there.” https://www.youtube.com/watch?v=Rr_tlBUIS3M&fbclid=IwAR3QmW8Qa2s7fFE2bfFkOIj_fOcm4qtO27nknji-yBY-fvc8DlMaoQYvQ1E Another multi-year tradition is the annual Dark Star Jubilee, a three-day festival nestled in the picturesque Legend Valley festival site in Thornville, Ohio. This years’ recently announced edition – which runs from May 24 until May 26 – will feature three nights of DSO plus performances from Chris Robinson Brotherhood, Billy Strings, Leftover Salmon, Lukas Nelson and Promise of the Real, plus many more. The Jubilee is always fun for English not just because of the other national names on the bill, but also for the opportunity for DSO members to explore their various side projects, and for the relaxing atmosphere the weekend presents. ““I think this is our 8th year doing that, and it’s been a rollercoaster ride as well,” he said. “We’ve had some great turnouts, and it took a few years to get that going so that people knew that we were there. There’s always room for side band projects at the Jubilee, which is nice. Jeff normally does a project every year; (Rob) Barraco (keys) does a couple of projects – he sat in with my band last year. I’ve got something coming up for the next one. So it’s really the icing on the cake for us. It’s three nights of Dark Star Orchestra, so most people are coming to see us. We have some great bands on the bill, and hopefully that brings out some other people as well. I love Leftover Salmon, and Chris Robinson Brotherhood has some great players in it, so that’s going to be exciting…the cool thing about the Jubilee is that it’s really laid back. Once you’re in, there are no hassles; you could bring your own beer. You’re able to just kick back and enjoy the good tunes. It’s a very hassle free festival compared to a lot of the big ones, and I think it’s a good thing we have going.” 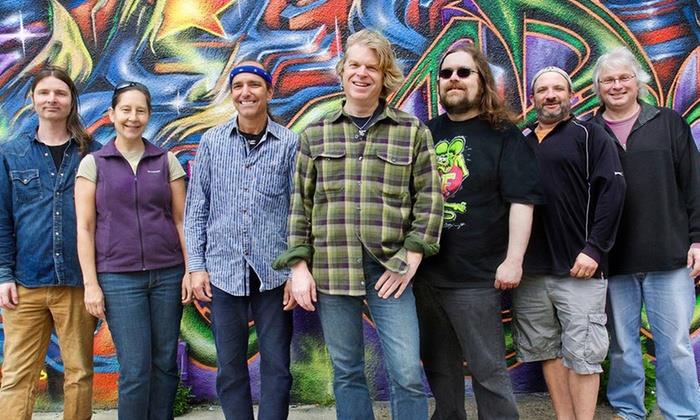 Along with a yearly getaway to Jamaica to go with the Jubilee and all the touring, it’s safe to say DSO has come a long way from its humble beginnings in Chicago in 1997. Although he isn’t a founding member, English has been in the lineup for nearly 20 years and has watched the band develop over the last two decades. Surprisingly, the nucleus of the current lineup has persevered through several personnel changes, and even an untimely death, for the better part of two decades where they grew to understand each others’ musical directions. “I joined in May of 1999, so I’m one of the older members along with Lisa (Mackey, vocals); she started a couple months in,” he said. “It’s kind of funny, because there’s nobody left in the band who was at the very first gig. I’m the second senior member. Rob Koritz (drums) came in right after me, and Rob Eaton (rhythm guitar and vocals) wasn’t far behind. Four of us have been playing with Dark Star since December of 1999, so the core of the band goes back almost to the beginning.” Rounded out by bassist Skip Vangelas (replacing Kevin Rosen who retired in 2013), the band will continue to blossom and bring their interpretation of the Grateful Dead’s music and live experience to fans from coast to coast. Always one to look ahead and wanting to continue growing, English has a personal wish list of things he hopes to see the band accomplish in the coming years. “We got invited back to Red Rocks again, so we’re looking forward to that again,” he said. “I think there are some venues out there that we haven’t played yet that we’d like to hit some day – maybe The Beacon Theater in New York, or even Radio City Music Hall and that’s smaller than Red Rocks so it’s not out of the realm of possibilities. Who would have ever thought that we’d sell out Red Rocks, but we did. It would be nice to play the Gorge Amphitheater or the Greek Theater in San Francisco. These are goals on my mind, for sure…that’s where I’d like to see us go from here. Otherwise, we’re just spinning the wheels and going the same places. That’s cool and everything, but I always like to look ahead and see what other things we can do that we haven’t done before and new goals to accomplish.” For the immediate future, DSO will continue down the east coast as the tour gets closer to the Penn’s Peak gig. As anyone who has experienced a Thanksgiving Eve show at the venue can attest, the night is all about letting loose and enjoying the music that has defined generations and will continue to for years to come. “The night before Thanksgiving is just a great time for everyone to get together and have a good time,” English said. “There’s some great music – music that’s the soundtrack of our lives. I kind of expect the same thing this year. The night before Thanksgiving is always fun, so come on out and experience the music with some of our friends.”

The Dead’s music being the soundtrack of people’s lives is certainly true for English, as the last 19 years of his life has been spent listening to, interpreting and delivering that music to legions of fans throughout the country. Admittedly, the bands dedication to touring was relentless when English first joined, but lately they have been finding themselves having a more balanced schedule, allowing for more family time. It’s a schedule that allows DSO time to recoup after a tour and recharge for the next run. “It’s been an incredible journey,” he said. “It’s been a mix of so many emotions, that I couldn’t even tell you all of them. There have been a lot of great experiences, and there’s been a lot of sacrifices made to do this whole thing; and a lot of mountains to climb. We got to play Red Rocks for the first time last year and sold it out, so that’s a nice feather in the cap. As you know, we spend a lot of time on the road, so there’s definitely some sacrifices that come along with that. As of this year, we’re getting a more balanced schedule. In order to play this music with all of our gusto, we need time to recharge and get reinvigorated again, and I think that’s really important. When I first joined, the band was playing about 170 shows a year; now we’re down to about 110. You know, I’ve got two young girls now, so it’s hard being away from them. Some of us have kids, and some are more grown up than others. The music makes it all worth it; we go out there and have a great time every night. The music kind of makes everything okay.”   Upcoming Dark Star Orchestra tour dates: Friday, November 16: College Street Music Hall, New Haven, CT Saturday, November 17: Palace Theater, Albany, NY Sunday, November 18: Paramount Hudson Valley Theater, Peekskill, NY Tuesday, November 20: Capitol Center for the Arts – Chubb Theater, Concord, NH Wednesday, November 21: Penn’s Peak, Jim Thorpe, PA Friday and Saturday, November 23 and 24: The Paramount, Huntington, NY Wednesday and Thursday, November 28 and 29: The National, Richmond, VA Friday, November 30: The NorVa, Norfolk, VA Saturday, December 1: The Anthem, Washington, DC   For more information, visit www.darkstarorchestra.net