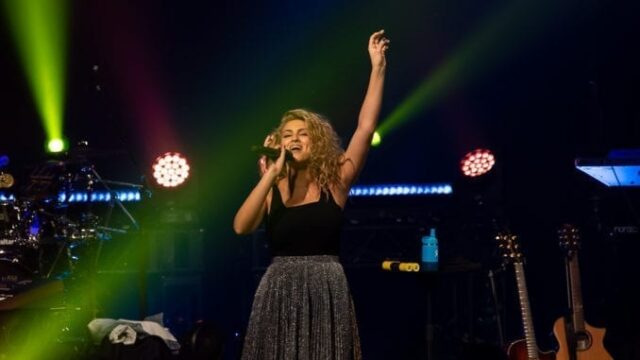 Photos and Review by Justine Willard

On Monday, November 19th Tori Kelly brought her Hiding Place Tour to the Herbst Theater in San Francisco. It was the first of two shows in San Francisco to conclude her tour.

The theatre was packed with diehard fans of all ages who have clearly admired her for years. The staging presented a very intimate setting and had a recording studio vibe with a rug and row of guitars.

Tori started off her set with “Masterpiece,” a song from her sophomore studio album Hiding Place. The crowd was very enthusiastic and sang along to every song and energetically screamed, “Yes queen!” They also encouraged her to sing their other favorites. Tori had a special treat for the audience and introduced “Coffee” an unreleased song which she sang and performed on her guitar.

Throughout the night Tori was accompanied by three backup singers and a full band. She showed off her amazing vocal skills and belted out insane runs with ease.

She also performed her favorite song from her new album “Psalm 42” and talked about how important the song was to her and how personal and emotional her album was, which is a side of Tori we have not seen before.

To end her set she sang “Don’t You Worry ‘Bout a Thing” a song from the 2016 movie Sing. After she left the stage she returned for an encore and sang an acapella version of “Soul’s Anthem (It Is Well)” from Hiding Place with just her backup singer. Then to close out the night she sang “Never Alone,” which is the second single from her new album. Throughout the song she was holding out her mic to the crowd encouraging them to sing along.

All in all, it was such a wonderful concert and Tori made sure it was a safe place where you could easily feel the love being shared around the room from members of the audience and Tori herself.

From the video channel of David Reed

Live in the Bay Area: Keane

Young The Giant and Fitz And The Tantrum Live 2019